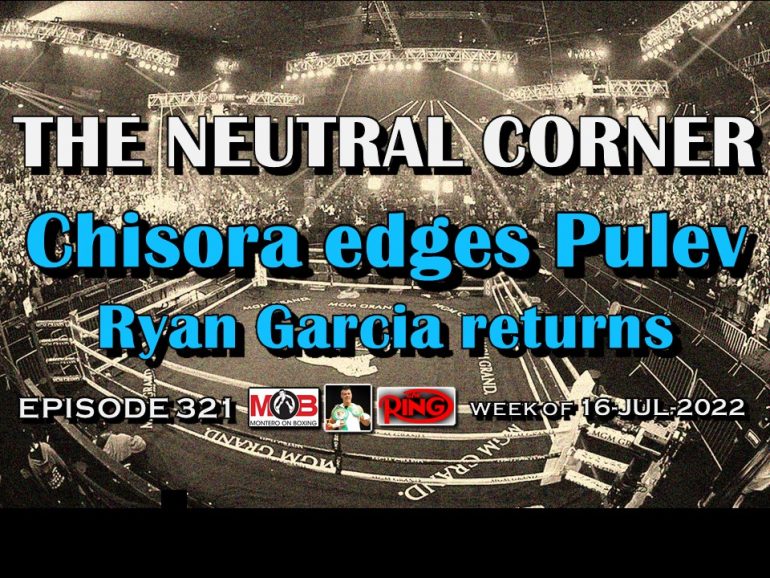 On episode 321 of The Neutral Corner boxing podcast, host Michael Montero returned from a two-week hiatus to catch up on the latest news and rumors.

Most notably, Jesse “Bam” Rodriguez has been added to the Canelo-GGG3 card on 17 September in Las Vegas. The undefeated junior bantamweight title holder from San Antonio, Texas, currently ranked number three by The Ring, will face rugged Mexican veteran Israel Gonzalez in the co-main event.

On Saturday July 9, Derek Chisora eked out a split decision win over Kubrat Pulev in London. The rematch of heavyweight rivals headlined a Matchroom Boxing show on DAZN. Pulev won their first bout in 2016 by split decision. In the co-main, Israil Madrimov and Michel Soro fought to a disappointing technical draw in a rematch of junior middleweights. A head butt caused a cut over Soro’s left eye, prompting the referee to stop the bout.

That same day in San Antonio, Texas, Rey Vargas beat Mark Magsayo by split decision to claim the WBC featherweight title. The fight headlined a PBC card on Showtime. In the co-main, Brandon Figueroa scored a TKO6 win over Brian Castro in a featherweight bout.