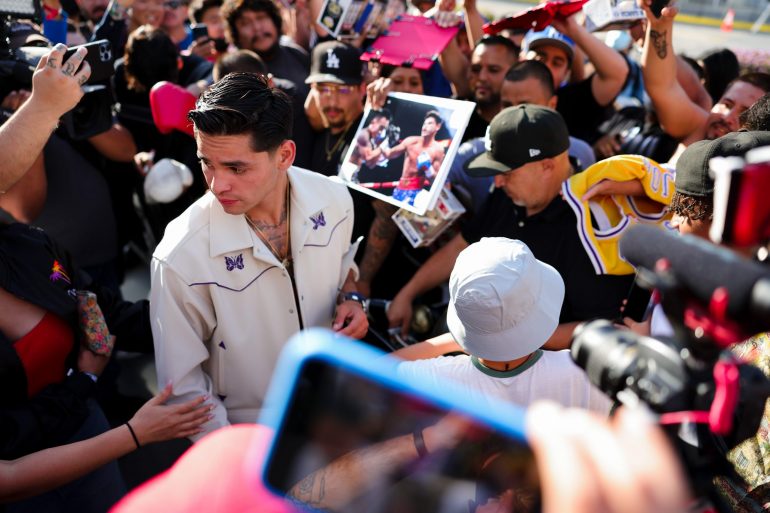 Ryan Garcia is mobbed by fans outside of Crypto.com Arena in L.A. prior to the kick-off presser for his July 16 fight with Javier Fortuna. Photo by Cris Esqueda / Golden Boy
12
Jul
by Doug Fischer

The headline to this article should not be about Gervonta “Tank” Davis. Ryan Garcia returns to the ring on Saturday, but he’s not fighting Davis. The 23-year-old lightweight contender will be facing veteran Javier Fortuna at Crypto.com Arena in Los Angeles in the main event of a Golden Boy Promotions show that will stream live on DAZN.

Fortuna (37-3-1, 26 KOs), The Ring’s No. 9-rated lightweight, is as battle-tested as a prize fighter can be without being shopworn. He’s a former featherweight contender, a one-time 130-pound beltholder, and former lightweight world title challenger (who dropped a razor-thin split decision to Robert Easter in 2018).

But as respected as Fortuna is, most interviews with Garcia inevitably lead to Davis and their potential showdown.

It’s not hard to figure out why. Garcia and Davis are by far the biggest attractions in the 135-pound division (if you’re a RingTV reader, you already know this). Both have a proven track record of drawing 10,000-plus fans to major arenas in different parts of the country. They have fan-friendly styles, dedicated social media followings, and the kind of celebrity support that most boxers lack.

So, naturally, hardcore fans have put the two standouts on a wishful “collision course.” And the boxing media knows that “Davis vs. Garcia” (or vice versa) will generate more views than either fighter vs. someone else.

“Tank and I, we have captivated the culture, in a way,” Garcia told RingTV without being directly asked about their potential fight.

“Our fight means a lot to the sport when it happens. Hopefully (pause), not ‘hopefully;’ I am determined to make it – next fight (after Fortuna).”

That sounds good – actually, it sounds awesome – but boxing fans and the media are going to be skeptical. We

know how the sport works these days. Garcia is on one side of the promoter/platform street (Golden Boy/DAZN) and Davis is on another (PBC/Mayweather Promotions/Showtime). We seldom see major attractions cross the street.

“That’s the reality of some aspects of the game,” admitted Garcia. “You usually have to just settle to fight the best available opponent on your side of the street, but luckily, I’ve already played the pieces I need to play so I can make that fight happen. His team is on board. My team is on board. So, now it’s all about finding out the particulars, you know, letting go of egos and just making the fight happen.” 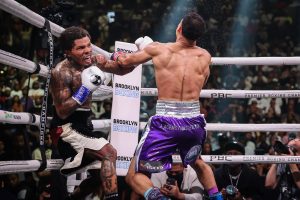 Garcia was ringside for Davis’ most recent fight, a sixth-round knockout of Rolando Romero on May 28, doing his part to fan the flames of what he hopes will blossom into a very public rivalry by jawing at Mayweather Promotions CEO Leonard Ellerbe and sharing a bet with Errol Spence Jr. (that Romero would win the fight) with his vast social media audience.

It didn’t escape his attention that the Barclays Center in Brooklyn was packed with Davis fans. The 27-year-old southpaw has also put butts in the seats of major arenas in his native Baltimore, Atlanta, San Antonio, and Los Angeles.

Garcia drew close to 15,000 to the AlamoDome in San Antonio for his 12-round unanimous decision over Emmanuel Tagoe in April. More than 10,000 assembled at the Honda Center in Anaheim, California, to watch him blast Francisco Fonseca out in one round on Valentine’s Day in 2020. Garcia has also sold tickets in Las Vegas and New York City.

Garcia says he and Davis are attractions in different markets but they appeal to different fan bases.

“I personally feel like I hit different demographics than Tank, but combining our two demographics, you’ve got pretty much the world,” said Garcia.

“Honestly, I think we’d do 500k and up in pay-per-view buys. I wouldn’t expect anything less than that. I think 500k is the LEAST it would get due to the fact that you got celebrities who are going to go crazy for it, you got star athletes who are going to go crazy for it, you got everybody. (When we fight) the whole culture is going to be watching at the end of the day. Everybody that’s in with what’s ‘in’ is going to be talking about that fight. You’ll have celebrities like LaBron, you know, who will be there, who will be promoting the fight. Tank’s got a lot of famous athletes backing him, but I’ve got the highest profile celebrity backing me for sure, I’ve got (soccer superstar) Cristiano Ronaldo backing me up. There’s no higher than that (laughs).”

LaBron and Cristiano weren’t in attendance for the Tagoe fight and probably won’t be ringside on Saturday, but these are the steps Garcia has to take to get to that monster dream fight with Tank. 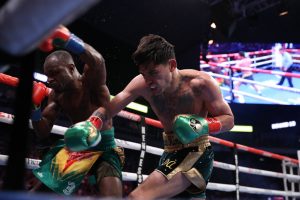 The 12 rounder with Tagoe was significant because it was his first bout in 15 months, during which time he dealt with mental health issues and switched out Eddy Reyonso for Joe Goossen as his head trainer.

Garcia admits he didn’t look great vs. the once-beaten fringe contender who was in survival mode for most of the fight, but he believes it was good to go the championship distance.

The significance of the Fortuna fight is Garcia’s quick (by today’s standards) turnaround and his second camp with Goossen.

“Getting back into the ring two months after my last fight is the most important thing I could do. My hand-eye coordination is getting better, that’s due to all the sparring I’m doing, all the practice, all the repetition. My eyes are much better, able to see much more now than the last training camp. When you take a year and half off and get back in a real camp it’s like ‘I kind of know what to do, but I gotta relearn it.’

“Those 12 rounds helped me more than anything else, more than if I would have knocked Tagoe out early.”

Some foresee Garcia having another long night with Fortuna – an awkward and rugged, yet athletic 33-year-old southpaw from the Dominican Republic – but with much harder rounds than he experienced with Tagoe.

Garcia views Fortuna as a threat but not because of experience or awkwardness, he views the Dominican as a dirty fighter.

“The main thing is to always maintain distance with a style like his because I really don’t want to get hit with a headbutt,” said Garcia. “But at the end of the day I really don’t care about how he fights, I’m just going to beat his ass.

“He can headbutt and elbow me all he wants, I’ll let the referee handle that. I’m just going to knock him out.”

Obviously, Garcia’s ready to put on a show.

“This is all about love for the sport, love for the game,” he said. “It’s bigger than Black/Mexican, you know, it’s really about us as people coming together and enjoying two young, strong, explosive athletes with speed going at it.

“I mean, that’s a fight you WANT to see. That’s a real battle! We’re not here to tap-tap to a victory, we’re here to catch you coming in and you get knocked out, that’s for sure, a dangerous chess match.”

To be clear, Garcia was talking about him vs. Tank, not him vs. Fortuna.

“Fortuna’s getting slept whether he likes it or not,” Garcia laughed. “Fortuna’s gonna be fun. I’m not overlooking him. I’m training hard, sparring five days a week, so if that’s called overlooking, I don’t know what overlooking is.”