Alexis Rocha: I always want to make a statement in every fight 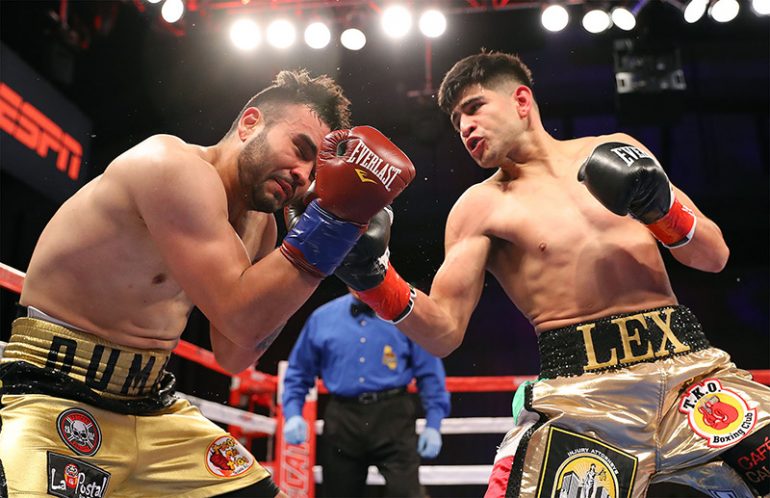 Hugely talented welterweight Alexis Rocha will look to continue his upward trajectory when he faces Luis Alberto Veron at the Crypto.com Arena (formerly The Staples Center), Los Angeles on Saturday.

Rocha, who had been initially scheduled to face Samuel Kotey, will instead face Veron. However, the late change in opponent isn’t an issue.

“As a fighter you have to really adapt to whatever is thrown your way,” Rocha (19-1, 13 knockouts) told The Ring. “Boxing takes some different turns but I’m ready for this.

“He’s a tough durable opponent. I always want to make a statement for every fight. I always want a knockout but I’m not going to go looking for it. My job is to break opponents down and that’s what we’re trying to do with Veron. My job is to go in on July 16, trust my ability and be confident in there and God willing I take that victory.”

The 25-year-old southpaw lost his unbeaten record to fellow rising prospect Rashidi Ellis (UD 12) in a hard-fought contest in October 2020. To his credit he hasn’t taken the defeat lying down and enters this fight on the back of a career-best win over previously unbeaten Blair Cobbs (TKO 9) in March.

“After the loss [to Ellis] that [win over Cobbs] re-established my career, [it was] my coming out party,” said the younger brother of two-time world title challenger Ronnie Rios. “I know there’s still so much more for me to prove out there. I feel like I’m getting better and better with each fight.

“I learned so much from that Rashidi loss, moving forward with that Blair opportunity. I wasn’t going to let it go to waste. I was going to take the opportunity and seize the moment.

“[Cobbs] was a little awkward. He tried to trash talk me, it was all new to me. It was kind of fun. I’m always that quiet young man, who lets his fists do the talking in the ring but talking back was new to me. During the fight he was an awkward opponent, running around, my job was to break him down and not let him move so much.”

Rocha, who has had an eight-week training camp at home in Santa Ana with Hector Lopez, was written off in some quarters after the loss.

“I read comments on Twitter and Instagram saying, ‘He’s not all that.’ That’s always how it is when you lose, then when you win it’s, ‘This kids a beast.’ He’s the next big thing,” said the former amateur standout.

“It hurts your record but it doesn’t hurt you in a sense that you can’t learn off it. Sometimes loses are learning experiences.

“I really think I’m hitting the scene now with that win. My job is to build off the momentum [of the Cobbs win.]”

The talented southpaw is focused on the task in hand but hopes to continue to build on his recent success going forward.

“I can’t overlook anyone, or be over confident against anyone,” said Rocha. “Hopefully it’s a fight for some type of eliminator. The future is bright for me.

“I love boxing, I love to fight and the competitor in me loves to win. I live, breathe, eat boxing and this is all I dedicate my time to.”

Golden Boy Matchmaker, Robert Diaz, is in no doubt just how good Rocha is.

“Alexis has a great future; he is disciplined and very talented,” said Diaz. “I really believe that the lone blemish on his record taught him a lot and was a feeling he never wants to experience again.

“He is ready to face the bigger names in the division. He just needs to keep looking good and making statement wins so that in a short period many will be looking his way as one of the top new stars in the 147-pound division.”

Veron (19-4-2, 9 KOs) turned professional in 2015. He won his first 16 fights in his native Argentina. However, he lost his unbeaten record to Michael McKinson (UD 10). The 29-year-old has gone 2-4 in his last six outings, but always given a good account of himself taking big-punching Elvis Rodriguez (UD 8) and Shohjahon Ergashev (UD 8) the distance.

Javier Fortuna: Put your chin up and look past me, Ryan – nice and tall – The Ring (ringtv.com)