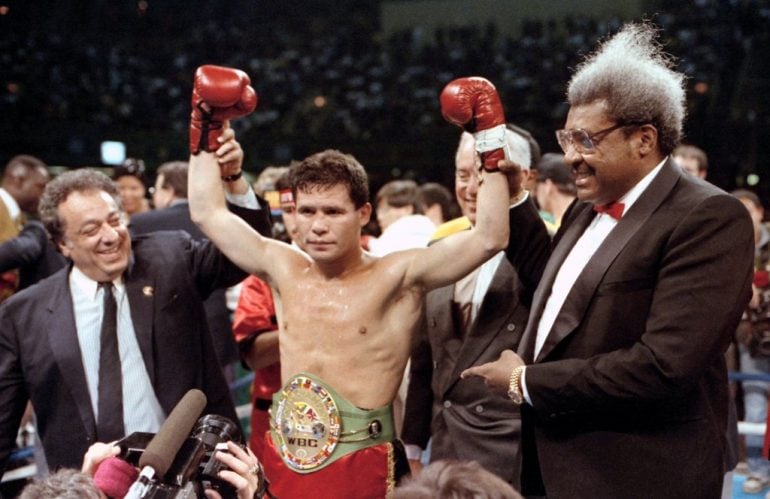 Photo by The Ring/ Getty Images
07
Jul
by The Ring

It was all going so well for the challenger… until it wasn’t.

On July 7, 1985, Julio Cesar Chavez retained his WBC junior lightweight title by scoring a damaging second-round stoppage of Roger Mayweather at the Riviera Hotel & Casino in Las Vegas. The official time was 2:30.

Chavez, despite being a champion with a 46-0 record, was making his first nationally televised appearance. However, the Mexican star had sent shockwaves through the sport with impressive wins over Mario Martinez (TKO 8 to win the vacant title) and Ruben Castillo (TKO 6) in his first defense.

Despite losing the opening round on all three scorecards, Mayweather had some success of his own. He moved well, pumped the jab with authority and crossed over the odd right hand. Chavez targeted the body and established distance.

Early in the second, Mayweather jolted Chavez with his signature right hand. The moment spurred the champion into action and he quickly closed the gap, scoring a legitimate double-right hand knockdown that was ruled a slip by referee Richard Steele.

That did nothing for Mayweather’s cause.

Badly shaken, the challenger was an open target for a follow-up assault and a flush right put him down heavily. Mayweather’s legs were gone, and after being bundled to the canvas, he was floored legitimately and rescued by Steele.

The great Chavez would make nine defenses of the title before moving up to lightweight. Mayweather, who had already held the very title he was fighting for, would go on to win the WBC junior lightweight crown. In his fifth defense, he was dethroned by Chavez in a rematch.