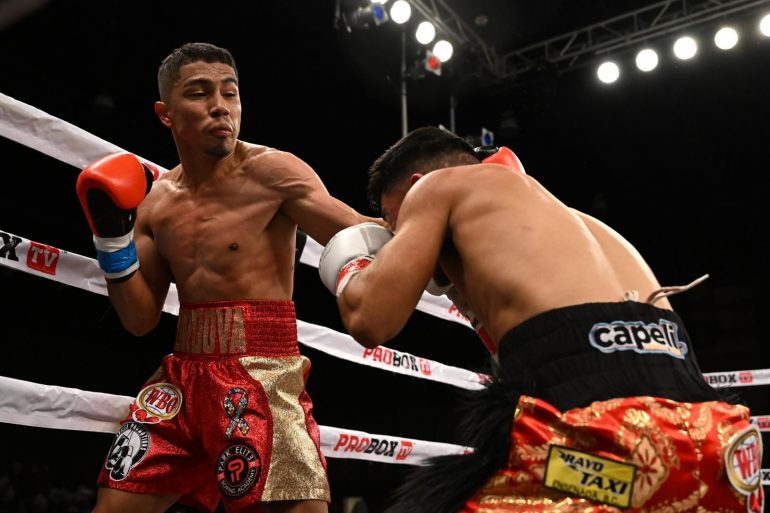 Angelino Cordova still isn’t sure why he was considered an afterthought heading into last week’s fight against Axel Aragon Vega.

The Venezuela native entered his United States debut undefeated but had fought just one fighter with a winning record. That fighter was Freddy Beleno, who brought a 26-19 record to the ring in 2018 when Cordova stopped him in eight rounds to win the national Venezuela junior flyweight title.

Vega, by contrast, had become a respected contender at 108 pounds through his competitive title challenges against Wilfredo Mendez and Hiroto Kyoguchi.

What the public overlooked, Cordova says, is his extensive amateur background. The 26-year-old Cordova had 143 amateur fights, of which he says he lost just 13. Cordova had fought all over the world as an amateur, including losing a decision to reigning gold medalist Hasanboy Dusmatov in a 2016 Olympic qualifier, and numerous bouts in Cuba. He had also competed in the World Series of Boxing.

“These are things that people in the world don’t know. They just look at your record. That’s why I was very confident in myself,” said Cordova (17-0-1, 12 knockouts), days after defeating Vegas by split decision in Kissimmee, Fla. in the co-feature of a card that aired on ProBox TV.

Cordova says he isn’t fazed by the criticism from those who felt that the more aggressive Vega should have won the fight, saying that he won the fight with his boxing and counterpunching.

“It doesn’t bother me the reaction because the people like to see a war. I was there to do my job which is to box, and I got the result,” said Cordova, who received eight stitches due to a cut over his left eye.

Fighting in Florida was the latest step in his father’s footsteps. Cordova’s father, Angel Cordova, fought from 1981 to 1994, fighting several times in Miami, including against former world titleholder Juan Nazario. Angel Cordova was his son’s first trainer. That job is now held by Percy Gayanilo, the former amateur boxer who took over training duties nine months ago after Cordova relocated to New Jersey to train at his gym, Park Elite Boxing Academy in Roselle Park.

Gayanilo says his network of top amateurs around the country helped him find sparring for a boxer as small as Cordova. Cordova sparred with unbeaten bantamweight prospect Jose Nieves (3-0, 2 KOs) at Park Elite, and traveled as far as Philadelphia to spar with top pros at Jaron Ennis’ gym.

Gayanilo says that Cordova’s absence from world title rankings is likely due to him being inactive for over a year, but says the WBO Latino title he won will likely get him back in the ratings.

Cordova, a promotional free agent who is managed by Edicson Aviles, says he’d like to fight for the vacant IBF junior flyweight title that Felix Alvarado vacated in March, but doesn’t have much of a preference for which opportunity he gets.

“I want to fight for a world title, it doesn’t matter. Everyone’s goal is to be a world champion. I’d like to fight Kyoguchi because he’s the main champion,” said Cordova.

Gayanilo says he’d like to see Cordova get the shot at RING champion Hiroto Kyoguchi that some felt Vega would be in line to receive.

“I think Hiroto’s style is good for Angelino,” said Gayanilo.