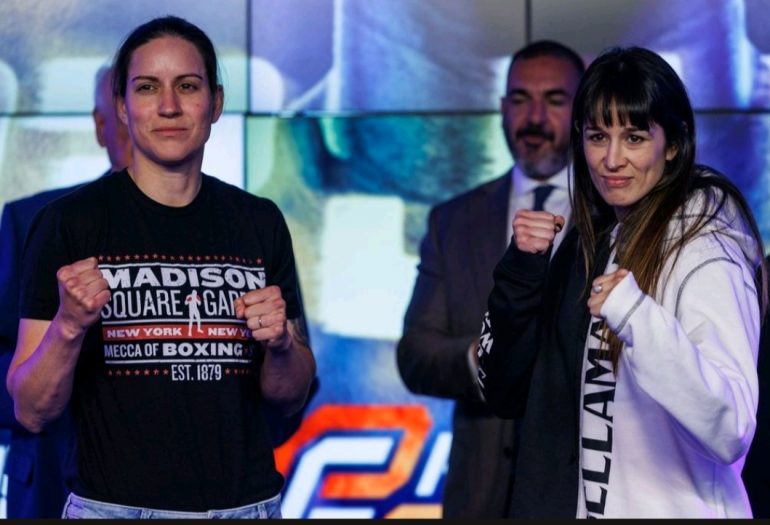 In a new week of great action in women’s boxing, a new emerging star managed to climb into the trailblazing Ring women’s ratings with a superb performance.

Canada´s Mary Spencer improved to an impressive 6-0 with 4 knockouts with a one-round demolition of Uruguayan former world titlist Chris Namus, sending her usually durable foe (this was Namus’s third stoppage loss in 33 bouts, although it was her second knockout loss in as many fights) three times to the canvas before being declared the winner.

The 37-year old Spencer, owner of a stellar amateur career, was thus promoted to No. 5 in the junior middleweight division, taking Namus’ former place.

“The Canadian boxer comes from a long amateur career, and growing in the pro ranks,” said author Yesica Palmetta. “She has a strength that stands out. Namus has been a great fighter, but she is no longer the same.”

Irene Deserti, Palmetta’s Argentine compatriot and co-author of the recently released “Abran Paso” (“Make room for us”), a book celebrating the first 20 years of professional boxing in their country, said that “Namus no longer manages to be at the level of competitiveness of the younger boxers. She has been one of the pioneers in Uruguay, but the new fighters bring an unstoppable force, even for an experienced one like Chris. I agree that Spencer should be rated No. 5.”

Historian Malissa Smith said that “Spencer, came into her Chris Namus fight with poise, strength and a seek-and-destroy mission. She showed an excellent jab which helped her set up a quick short right that put Namus on the canvas for the first time in round one. Spencer then displayed an array of power punches up top and to the body that set up the second knockdown, and by the end of the round, she was able to knock Namus down for a third time. At 5’11 she can also clearly compete at middleweight and even super middleweight. She certainly deserves entry into the rankings at 154 with the hope that she will have the chance to compete in an eight or ten rounder her next timeout.”

Also on this past weekend, Ring champion Jessica McCaskill defended her array of world title belts against Mexico’s Alma Ibarra in another one-sided win that helped “Caskilla” solidify her claim as the best welterweight on the planet.

“Jessica McCaskill was a wrecking ball in the ring against Alma Ibarra,” said Smith. “The constant barrage of CasKilla’s wide overhand rights, left hooks, and stiff up-jabs were devastating to Ibarra, who though taller and capable of showing good boxing skills, was never really able to execute her game plan.”
Other also praised McCaskill’s skills, but with slightly less enthusiasm.

“McCaskill is awkward, but her awkwardness works with her fighting style,” said columnist Mark Jones. “I don’t think she beats Chantelle Cameron, who’s an elite boxer-puncher, but it’s a matchup I want to see. I’m more impressed with McCaskill’s win than most.”

Deserti concurred by saying that “I still don’t like the champion’s boxing, but it’s undeniable that she is devastating with her power. Ibarra couldn’t do anything, couldn’t stop her, much less hurt her with any of her blows. Although, like Mark, I think that Cameron can be a problem for Jessica. I would like to see that fight.”

A few divisions below, junior bantamweight Clara Lescurat picked up the WBO belt in her division with a tepid performance in her native Argentina against Mexico’s Maribel Ramirez, but Lescurat failed to earn a promotion in a talent-laden division.

“It wasn’t a great fight for me,” said Deserti, watching the fight from ringside along with this writer. “Although Lescurat has a great amateur career and is on the rise, I think she still lacks some solidity to be able to face the champions of her division from other organizations. She has a great physical condition, but she still can’t clearly define her style,” while her colleague Palmetta agreed by calling the fight “a live sparring session.”