On this day: Muhammad Ali dominates Joe Bugner, sets up a Thrilla in Manila 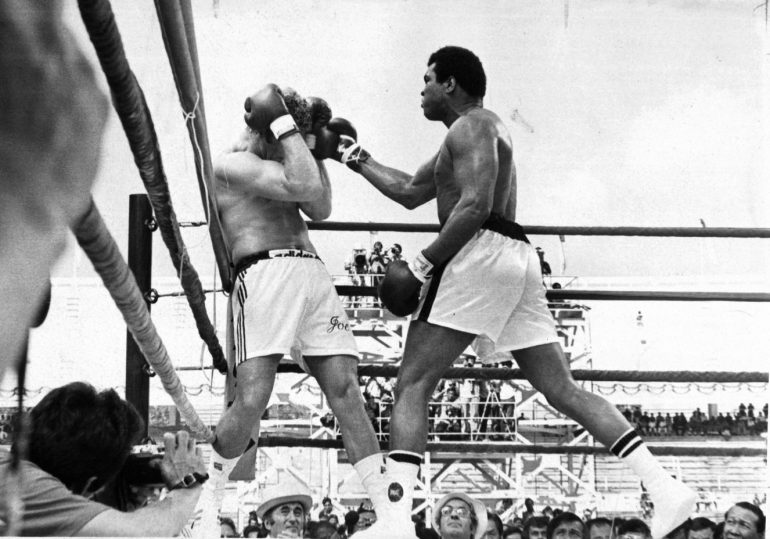 Ali (right) opens up on Joe Bugner in their rematch in Kuala Lumpur, Malaysia. Photo by The Ring/ Getty Images
30
Jun
by The Ring

The sun aside, this was a relatively easy night for “The Greatest.”

On June 30, 1975, Muhammad Ali scored a dominant 15-round unanimous decision over Joe Bugner outdoors at the Merdeka Stadium in Kuala Lumpur, Malaysia. The official scoring on the five-point must system was 73-67, 73-65 and 72-65.

Ali bossed the first half of the fight simply because Bugner adopted a purely defensive posture during those rounds. Perhaps the challenger was reserving his gas tank due to the searing heat, but the downside was that he fell miles behind on the scoring. Despite moments of success in the subsequent rounds, Bugner was never going to close the gap on a technician of Ali’s caliber.

The fight produced very little drama, but the buildup wasn’t without incident.

“We received a death threat at the hotel and handed it over to the police,” Bugner told The Ring in 2016. “After that, on the day of the fight, there were 200 Marines stationed at the stadium with telescopic rifles. When I saw all of that security I felt pretty safe but then I got to thinking, ‘It only takes one bullet to kill me.’

“The fight took place at 10:30 in the morning, so I thought maybe the crowd won’t be that big. I should have known better because when we got the stadium, there were 40,000 people there and 200 million watched the fight on closed circuit. Ali had such magical contact with the human race. He was beautiful and when you were near him, he just gave off this incredible magnetism. It didn’t matter where he was, people just gravitated to him and that never changed.”

Before the final round got underway, Ali marched toward Joe Frazier, who was stationed ringside, to begin early negotiations for their rubber match. Frazier’s response was simple: “You will get it!”

“The Thrilla in Manila” would be as far from easy as one could imagine.