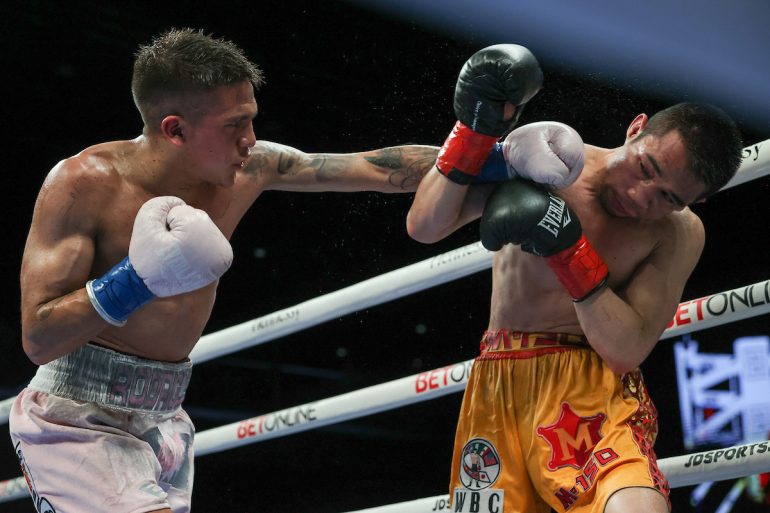 Bam Rodriguez's eight-round stoppage of Srisaket Sor Rungvisai is one of the best performances of 2022. Photo by Melina Pizano/Matchroom
27
Jun
by Francisco Salazar

Before a raucous and sold-out crowd, Rodriguez broke down Rungvisai, dropping him once before ending matters in the eighth round. The win over the hard-hitting former Ring/WBC champion was Rodriguez’s first defense of the WBC world junior bantamweight title.

“(Rungvisai) was the hardest puncher I’ve ever been in the ring with (thus far),” said Rodriguez, who signed a promotional extension with Matchroom Boxing, it was announced on Monday. Rodriguez (16-0, 11 knockouts) is co-promoted by Japan-based Teiken Promotions.

The future is bright 💫

✍️ @210bam has extended his deal with @MatchroomBoxing 🤝

“It was a tough fight until the end. I stayed in the pocket a little too long at times. (Trainer) Robert (Garcia) reminded me to move in and out because he packs a punch.

“A lot of people doubted me going into this fight. I was full of emotions after the fight was stopped. That’s why I dropped to the canvas.”

The sky is the limit for the 22-year-old fighter as there could be more tantalizing matchups against the best junior bantamweights in the sport, including Roman ‘Chocolatito’ Gonzalez and Ring Magazine champion Juan Francisco Estrada. 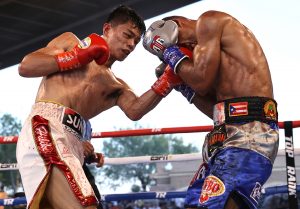 Rodriguez will likely focus his attention on fighting at 112 pounds. That could include match-ups against top contenders and world titleholders like undefeated WBO beltholder Junto Nakatani, who was sitting ringside in San Antonio Saturday night.

“I want to talk to my team, which includes Robert and Eddie Hearn (of Matchroom Boxing),” said Rodriguez, who was campaigning at 108 pounds before moving up in weight and winning the vacant WBC title by outpointing Carlos Cuadras on February 5. “I want to win a world title at 112 pounds and my brother can take on those at 115 pounds.”

Rodriguez’s older brother, Joshua Franco, fights at junior bantamweight and holds a secondary world title belt. Promoter Fernando Beltran, who promotes Estrada, confirmed to The Ring a fight between Estrada and Franco is next, mentioning August as a target date.

It would be interesting to see what Rodriguez does next, but he is adamant about facing the best competition, no matter what weight class it is. Beating Cuadras and now Rungvisai makes him an early candidate for the ‘Fighter of the Year’ award. Rodriguez is taking it all in, including if and where he is placed in pound-for-pound rankings.

“A match-up with Nakatani would be special,” said Rodriguez. “Beating legends I looked up to growing up means a lot to me. And I also have faith my brother can fight and beat anyone at 115 pounds, including Estrada.

Franco, who also resides in San Antonio, is also trained by Garcia and is promoted by Golden Boy Promotions.