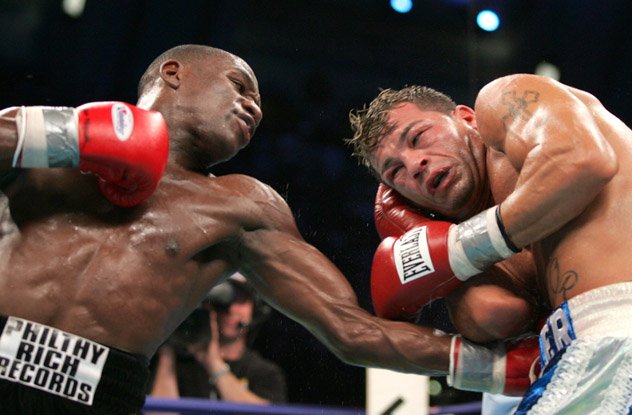 Photo by Ed Mulholland/ Getty Images
25
Jun
by The Ring

Fight fans ended up watching this one through their fingers.

On June 25, 2005, Floyd Mayweather wrenched the WBC junior welterweight title from Arturo Gatti by forcing a sixth-round corner retirement at the Boardwalk Hall in Atlantic City. The official time was 3:00.

The general consensus coming in was that Mayweather was on another stratosphere from Gatti in terms of skill, speed and reflexes. Already a two-weight world titleholder, “Pretty Boy” (this was pre-Money persona) had established himself as one of the finest pound for pound fighters on the planet.

However, Gatti’s warrior legend, which had been bolstered following an incredible three-fight series with Micky Ward, turned this one into a pay-per-view attraction. After all, Gatti had pulled miracles before and this was an opportunity to surpass himself.

He didn’t have a prayer.

Mayweather, headlining his first ever PPV event, was red hot from the opening bell. Controversy ensued when Gatti turned to referee Earl Morton to complain about being clipped on the break and Mayweather seized the opportunity to floor his man with a quick left hook.

Things went from bad to worse.

Gatti had no success and Mayweather teed off with an assortment of damaging combinations. The so-called fight had turned mismatch and the evidence appeared in the form of gruesome swelling around Gatti’s orbitals and mouth. Trainer and former two-weight world titleholder Buddy McGirt refused to let his fighter come out for Round 7.