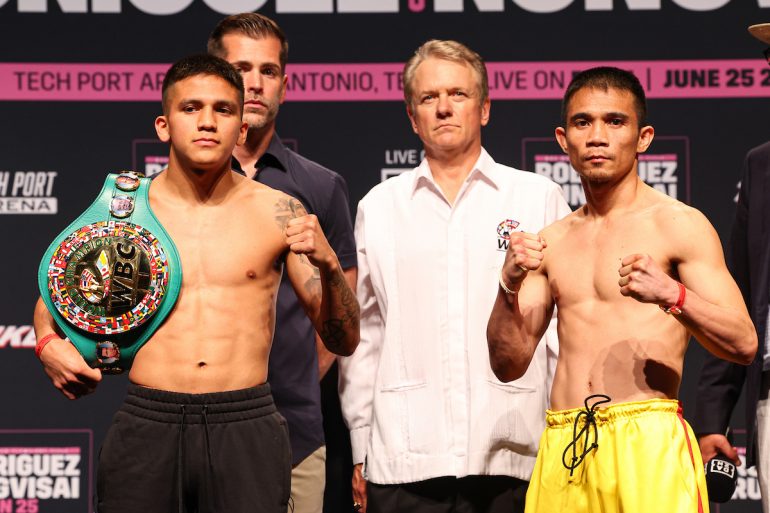 Jesse Rodriguez and Srisaket Sor Rungvisai pose after weighing in for their fight at the Tech Port Arena in San Antonio. Photo by Ed Mulholland/Matchroom
24
Jun
by Francisco Salazar

Rodriguez and Rungvisai both weighed in at 114.6 pounds.

The 22-year-old Rodriguez will make the first defense of his WBC belt against Sor Rungvisai at the Tech Port Arena in his hometown. The 12-round title bout will headline a four-bout DAZN stream (8 p.m. ET/ 5 p.m. PT).

Rodriguez (15-0, 10 knockouts) and Rungvisai are two of the best junior bantamweights. Rungvisai and Rodriguez are ranked No. 1 and No. 5, respectively, by The Ring.

Rodriguez won the vacant WBC title by defeating Carlos Cuadras by unanimous decision in his last bout on February 5. Cuadras was originally scheduled to face Rungvisai for the title, but faced Rodriguez instead, as Rungvisai had to withdraw from the fight due to a non-COVID 19 illness. Rodriguez was scheduled to fight Fernando Diaz in a junior flyweight bout on the same card, but agreed to the fight after being presented with the offer to face Cuadras.

Jessica McCaskill (11-2, 4 KOs) of Chicago will defend her Ring Magazine championship and undisputed welterweight titles against Mexico’s Alma Ibarra in a 10-round bout.

McKaskill weighed in at 144 pounds, while Ibarra weighed 144.4 pounds.