Women’s Ratings Update: Alaniz and Derieuw gain ground, Parker and Camara in at No. 5 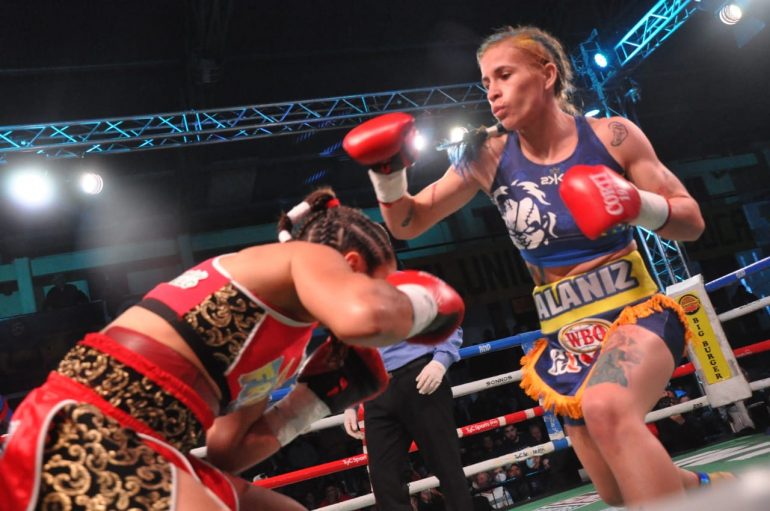 In this week’s action on the women’s boxing front, it was the turn of the up-and-coming unbeaten young starts to make a splash. And a splash they made.

First up, one of women’s boxing most promising young starts lifted her first world title belt when Argentina’s Gabriela Alaniz steamrolled past her compatriot Tamara Demarco, stopping her in the 7th round to earn the WBO flyweight belt.

Previously rated at No. 5 by The Ring, “La Chucky” sent Demarco to the canvas twice in the first round and forcing a surrender in the seventh to clinch a victory that places her as one of the future stars in this talent-laden division and in women’s boxing in general.

Thus, she was unanimously promoted to No. 4 in one of boxing’s elite divisions, and the future looks bright for the colorful young champ.

“Alaniz has been a real torment for her opponents,” said Irene Deserti, editor of Rincon Rojo Magazine. “Although Demarco did not want to give up and tried everything to reach the end of the fight on her feet, nothing seemed to have an effect. She was hit hard and I think it was wise to stop the fight,” said the writer, mentioning the moment in which Demarco’s corner threw in the towel at the beginning of the seventh round.

“I love ‘La Chuky’s style in and out of the ring. What a performance with those crisp, clean jabs and punches, and the KO power. I agree with Diego that she is one of the rising stars not only at flyweight but boxing in general,” said Beautiful Brawlers’ Lupi Gutierrez-Beagle, with columnist Mark Jones indicating that “Alaniz has stopped two quality opponents in a row and is deserving a bump to No. 4. She’s a serious threat to (current Ring champion Marlen) Esparza.”

Historian Malissa Smith added that “(Alaniz) is a good fighter with excellent skills and ready for the next step – and a competitive opponent for Esparza.”
Two fights in the bantamweight division produced only one change in the ratings.

Current No. 2 Yulihan Luna Avila had a relatively easy night against Jessica Gonzalez, but her performance (as well as the quality of her opponent) was not deemed good enough to promote Luna Avila above current No. 1 Dina Thorslund.

“Luna possess a first-rate jab, and got her revenge against Jessica Gonzalez who defeated her in 2014, but Thorslund is clearly the better fighter owning wins over Zulina Muñoz, Alesia Graf, and Alicia Ashley. Luna’s quality of opposition is spotty at best,” argued Jones, in a comment that many other panelists felt right on point. Jones went as far as suggesting that Thorslund is in the cusp of entering the pound-for-pound ratings once she manages to get the right wins under her belt.

In the other notable bout in the division, Melissa Odessa Parker earned her sixth win in a 10-round battle with unbeaten Mikenna Tinsley, and was immediately considered to take over the No. 5 position displacing Ebanie Bridges.

Parker did earn the promotion, but not without some serious pushback.

“I would not change the ranking,” said Deserti. “I would keep, at least until her next presentation, Ebanie Bridges at No. 5. I feel that her last few performances weigh much more than Parker’s.”

Jones expanded on this by saying that “I’d like to keep Ebonie Bridges at No. 5. I thought she looked better against Roman than did Parker. Bridges, Parker, Jamie Mitchell, Shannon O’Connell, Shannon Courtenay, and Jasseth Noriega are all on or around the same level, but I believe Bridges to be separating herself from the pack.”

Gutierrez-Beagle, on the other hand, argued that “Melissa is a force to be reckoned with and I’m looking forward to seeing just who will be signing the contract to fight her next. I’d like to see Parker at No. 5.”

Finally, a combination of a stay-busy fight for our No. 5 junior welterweight Oshin Derieuw in six rounds over sub .500 opponent Elsa Hemat and the extended inactivity of No. 4 Anahi Sanchez led to Belgium’s Derieuw being promoted to No. 4 and Canada’s Jessica Camara entering the fold at No. 5, with Sanchez exiting until further notice.