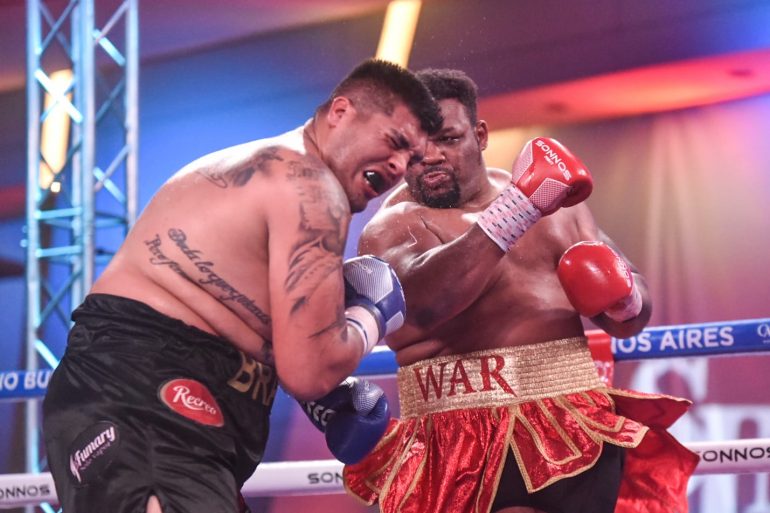 BUENOS AIRES, Argentina.- With a workmanlike performance in front of a small and mildly hostile crowd, unbeaten heavyweight Jarrell Miller returned to the ring after a three-and-half year hiatus with a ten-round, unanimous decision win over Ariel Bracamonte, in the opening bout of the broadcast of a WBA’s “KO to Drugs” event at the local Casino Buenos Aires.

Showing a better condition than what his 341-pound frame would suggest, Miller (now 24-0-1, 20 knockouts) plodded around during the first few rounds in which an eager but limited Bracamonte managed to swarm the Brooklyn native with punches from all angles.

Unable to outsmart or outbox Miller, Bracamonte set out to outmuscle and outshustle him, and he earned a few early rounds in some scorecards with that tactic.

As soon as Miller found his rhythm, however, the fight was all but over for the willing local credit, who trudged on spurred by a small but enthusiastic crowd. Hooks and uppercuts landed at will on Bracamonte, and by the end of the fight he was bleeding profusely from his nose and mouth.

Miller lost a point in round four for a blatant low blow that left Bracamonte cringing in pain for a few minutes until he was finally able to recover. And the final stretch of the bout proved to be the best, with Bracamonte putting it all on the line, first in search of a miracle punch and then falling back to survival mode without neglecting his aggressive style, much to the delight of an audience that refused to allow him to go down easily.

Miller had fought for the last time in 2018 before being banned due to testing positive for performance-enhancement drugs and other banned substances in several occasions. His ban was due to expire this month of June 2022, and he will now continue his career fighting out of Boca Raton, Florida.

In the non-televised portion of the card, another clash of heavyweights took place as Kazakhstan’s Ivan Dychko steamrolled past local credit Kevin Espindola in a ten-rounder.

The 31-year-old Dychko improved to 12-0 (11 KOs), failing to score a stoppage for the first time as a pro against a willing but outgunned Espindola (now 7-4, 2 KOs) who was never able to find his range against the much taller (6’5’’) visitor. Dychko scored at will with his stiff jab, keeping his foe at a distance and effectively avoiding his onslaughts during most of the bout. The scorecards were 100-90 and 99-91 (twice) for Dychko.

In the co-main event, junior bantamweight Tobias Reyes improved to 8-0 (7 KOs) with a second-round TKO over previously unbeaten Sebastian Castillo (now 7-1, 3 KOs). A few slips in the first round were followed by more proper knockdowns in the following round, and the accumulation of punishment and visits to the canvas by Castillo ended up prompting the referee to halt the contest towards the end of the episode.

In the main event, former amateur standout Mirco Cuello showcased his extraordinary speed with a second-round stoppage win over Leonardo Padilla in a clash scheduled for 10 rounds in the featherweight division.

The 21-year-old southpaw went to work on Padilla as the bell was still ringing, and he had his Venezuelan foe on the ropes by the end of the first round, landing at will on him and putting him on the verge of a stoppage.

Cuello (now 8-0, 6 KOs) picked up right where he left off in the second, peppering Padilla (21-5, 15KOs) with a barrage of punches until he forced him to succumb to the canvas towards the end of the round. Padilla did beat the count but was not deemed fit to continue the fight by referee Jeremy Hayes, who waved off the contest.