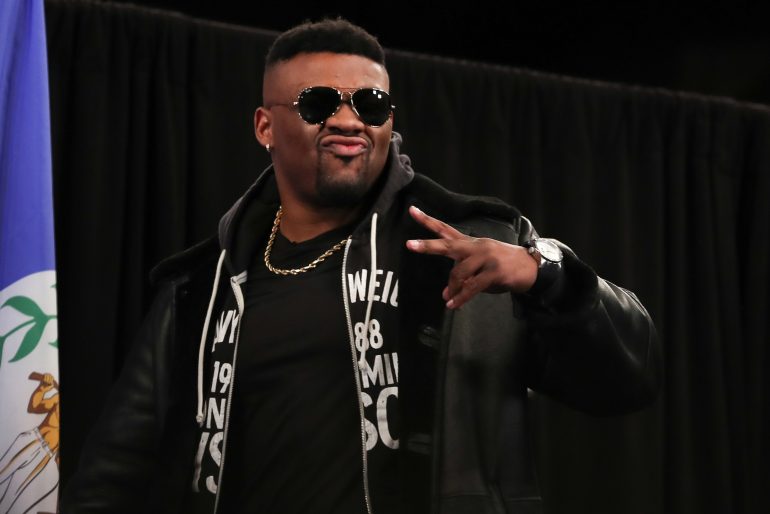 The comeback trail is never a one-way road to the top. It is often a meandering path through rough patches of uncharted territory, with no clear destination in mind.

For Jarrell “Big Baby” Miller, the start of that journey has begun in an unlikely setting, but the final destination remains the same.

“Oh yeah, I’ll fight anywhere,” said Miller (23-0-1, 20 knockouts) minutes before stepping onto the scales in Buenos Aires, Argentina, where he will be facing local credit Ariel “Chiquito” Bracamonte (11-7, 6 KOs) at the local Casino in Puerto Madero on Thursday night, in an event televised by TyC Sports. “I’ve always been this type of fighter, even in my kickboxing career. This is also a WBA event. A lot of kids don’t know that, but when you fight internationally it brings you up a lot quicker too. My point here by fighting the number one-ranked heavyweight in Argentina is making sure I get in these rankings, go out and do my job, and look phenomenal doing what I do.”

The WBA event in question is the sanctioning body’s recurring “KO to Drugs” card, which will feature a host of local contenders pitted against foreign fighters in a two-night extravaganza (another show is also slated for Friday). And while the appropriateness (or lack thereof) of placing a multiple doping offender like Miller at the top of a drug-prevention-themed event may be amusing to the keyboard warriors du jour (I’ll make sure to leave some space at the bottom of the page for you to write the puns that have not written themselves yet), the whole thing is no laughing matter to Miller, who claims that he has felt the support of the boxing world during his three-year hiatus.

“Real people in boxing who know me and know my heart and know the truth have sent me a positive message,” said Miller, 33, who has been sidelined since 2018 after a series of drug tests in which he tested positive for performance-enhancing drugs only weeks prior to his title shot against Anthony Joshua at Madison Square Garden. “Even the champ, Tyson Fury, has been nothing but positive. So my thing is thinking positive and get back on track, put my foot to the pedal, and get my championship.”

Back then, Andy Ruiz Jr. took his place and subsequently became a champion and a millionaire after stepping in as a late replacement and stopping Joshua in stunning fashion. But now Miller wants to claim his place on the table once again and make things right. And he claims that the support he is feeling now does not end with his fellow heavyweights like Fury, with whom he has recently sparred.

“Even one of the best promoters in the sport, Bob Arum, went on record and said some hurtful things, but when he found out the truth, he called me in person and apologized, he said ‘things happen in life, I want you to get back stronger, do things the right way and we’ll get you back on top.’”

Eventually, Miller would sign a promotional deal with Arum’s Top Rank, but his comeback attempt in 2020 was once again cut short by yet another positive test for PEDs back in 2020.

Then, after serving his suspension from boxing, which is set to expire this month, Miller claims he is ready to jump right back into action.

“My expectation is to knock his ass out. That’s what I do,” he said about Bracamonte, 29, minutes before an intense post-weigh-in stare-down in which Miller pushed the local fighter dismissively as they were being separated. “I love being in Argentina, it’s a great country. I want to show the people of the world that you can come back from anything. If it’s drugs on the streets or drugs in the sport, you have to educate yourself.”

The fact that he has traveled all the way to an unknown country to risk it all in a hostile environment, said Miller, should be taken as a sign for his future foes that he means business and is ready to deal with anyone, anywhere.

“The title shot is going to happen. I am not worried about the title shot. All these guys are worrying about a big payday, and they don’t want to fight each other. I will fight anybody. I’d go right into a title fight if it was me, but like I said I have an amazing team like my trainer Aureliano Sosa here, I have a really good management team down in Boca Raton, Florida. And I said ‘you know what? We waited three years, we’re not rushing or anything, I’ll take a couple of fights and see what I need to fix from there.’”

Making up for lost time after such a long layoff will be a challenge that Miller is ready to meet.

“I am going to be real busy the next few months. A lot of guys are waiting and not fighting right now, I am a true believer and an educator in the sport, inside the ring and outside. I know I will take as many fights as I can right now, I gotta get this ring rust off, so my goal is to get four or five fights in the summer and see what I have to fine-tune.”