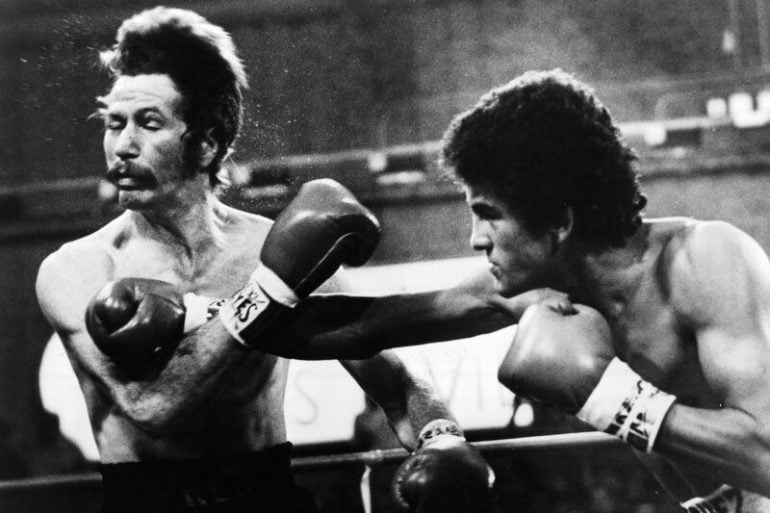 Sanchez (right) proved his superiority. Photo by The Ring/ Getty Images
21
Jun
by The Ring

Forever recognized as a truly great champion, he none-the-less remains the epitome of promise unfulfilled.

On June 21, 1980, the ill-fated Salvador Sanchez retained his Ring and WBC featherweight titles by posting an emphatic 14th-round stoppage over Danny Lopez at the Caesars Palace Sports Pavillion in Las Vegas. The official time was 1:42.

Four months earlier, in Phoenix, Arizona, Sanchez scored a 13th-round stoppage over Lopez to win the championship. The Mexican star was tested by “Little Red” on this occasion, but the challenger’s relentless attack faded in the late rounds.

A brutal series of Sanchez power shots rocked Lopez to his boots in the 14th  and referee Mills Lane wisely halted the action.

Lopez would retire following the defeat although he did make a failed one-fight return in 1992.

Sanchez made nine defenses in total, many of which came against excellent or even great fighters. Ruben Castillo (UD 15), Juan Laporte (UD 15), Wilfredo Gomez (TKO 8) and Azumah Nelson (TKO 15) were all bested by one of Mexico’s greatest ever fighters.

Three weeks after the Nelson victory, at just 23 years old, Sanchez died from injuries sustained in a horrific car crash.