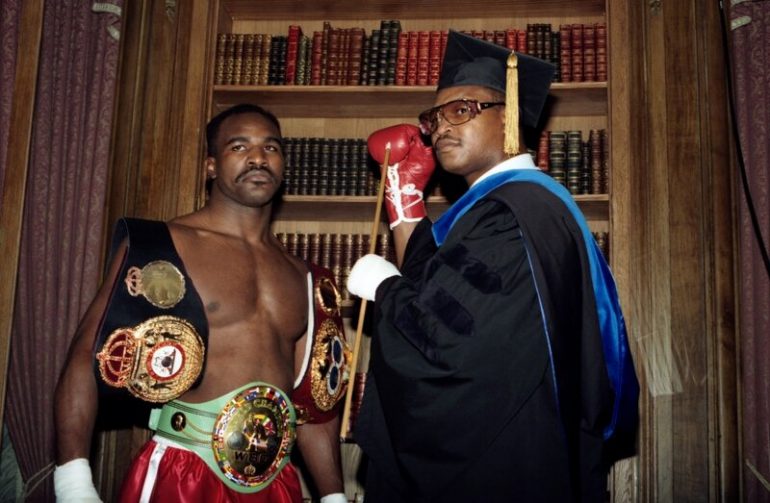 Had they met in their respective primes, it would have been a fight for the ages.

On June 19, 1992, Evander Holyfield retained his undisputed heavyweight championship by posting a 12-round unanimous decision over an aging Larry Holmes at Caesars Palace in Las Vegas. The official scores were 117-111, 116-112 and 116-112.

Following the electrifying title reign of Mike Tyson, the 27-0 Holyfield was still struggling for acceptance as his successor. He’d blasted out Tyson conqueror Buster Douglas in three rounds, but a close call against Bert Cooper (TKO 7) and a harder than expected points win over the division’s other old timer, George Foreman (UD 12), did little for his reputation.

The 42-year-old Holmes had earned this title shot four months earlier by taking former Olympic champion Ray Mercer to school. He was no longer the fleetfooted boxer-puncher of old, but still had enough experience, guts and ring IQ to be competitive with the best. He’d made Mercer look like a novice and claimed a comfortable unanimous decision win.

However, Holyfield was a different proposition altogether. The 29-year-old champion was busier, quicker and had more variety to his game than Mercer. Holmes (54-3) could mess Holyfield around and frustrate him, but he couldn’t outgun him at this stage of his career. Some savvy counter punching off the ropes worked for the challenger in spots but he just wasn’t busy enough.

A bad cut opened up around Holyfield’s right eye in the sixth, the result of a Holmes elbow, and that was the only moment of serious drama in the fight.