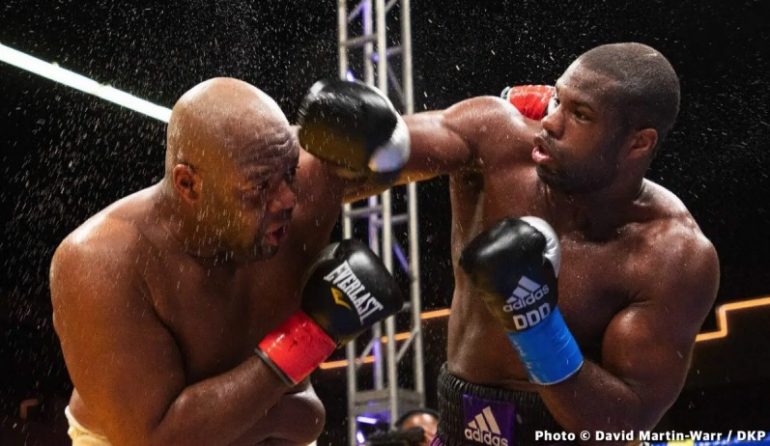 Daniel Dubois made short work of Trevor Bryan, Saturday night at Casino Miami Jai Alai, in Miami, Florida, scoring a KO 4 victory against the previously undefeated American. With the win, Dubois (18-1, 17 knockouts) claimed one of the multiple secondary titles that the WBA currently has in the heavyweight division.

Of course, any knowledgeable boxing observer recognizes Tyson Fury, who holds The Ring championship and WBC title, and Oleksandr Usyk, who holds the IBF, the true WBA and WBO titles, as the two premier heavyweights today. However the WBA just can’t help itself and regularly hands out several titles in each weight class.

Despite the WBA nonsense, Dubois was impressive against Bryan and remains one of the top young contenders in the division. The 24-year-old Londoner has won three in a row since his lone defeat, in 2020, against Joe Joyce. It was also his second straight fight in America, with his first 17 pro bouts having taken place in the United Kingdom.

“No disrespect to anyone,” said Dubois after the fight, “but Trevor’s ‘0’ had to go.”

Bryan (22-1, 15 KOs), who had never fought an opponent within a mile of the top 10 before facing Dubois, was never truly in the bout. He did manage to land a few good shots here and there but was mostly in survival mode from the opening round. Dubois was able to work behind his jab early and often and that set up his power punches against his outmatched opponent.

The outcome of this fight was never in doubt. From the onset, it felt like it would only be a matter of time before Dubois connected with a big shot. That happened toward the end of the fourth round, as “Dynamite” landed a left hook-straight right combo that sent Bryan crumbling to the canvas.

Dubois is now the WBA mandatory challenger for titlist Oleksandr Usyk. However he will have to wait his turn for a crack at the Ukrainian, who is scheduled to face Anthony Joshua in a contractually-mandated rematch later this summer. In the meantime, Shane McGuigan, Dubois’ trainer, said they would likely head back to the UK for their next fight. He mentioned the desire to go up against a UK veteran like Dillian Whyte or the like later this year.

“Bring them all on,” said Dubois after the fight. “Now I’m ready.”