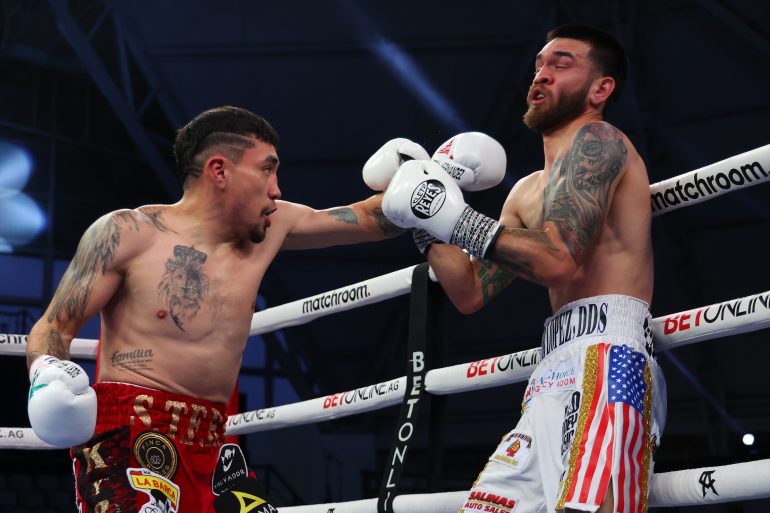 Jorge Castaneda takes a hard left from Eduardo Hernandez during their bout in Guadalajara, MX . Photo by Ed Mulholland/Matchroom.
10
Jun
by Diego Morilla

The undercard of the junior flyweight Ring championship battle between Hiroto Kyoguchi and Esteban Bermudez produced more than handful of worthy performances.

In the prelude to the main event of the night at the Domo Alcalde in Guadalajara, Mexico, Eduardo Hernandez stunned Jorge Castañeda to score the most furious stoppage of the night in a bout originally scheduled for 10 rounds in the junior lightweight division.

Hernandez (now 32-1, 29 knockouts) wasted no time taking the fight to his fellow once-beaten opponent, rushing out of the corner swinging wildly until he landed two right hands capped by a left hook and then a straight left to send Castañeda down on the seat of his trunks within the first minute of the bout.

A brutal follow-up two-fisted attack with Castañeda (now 15-2, 11 KOs) pinned against the ropes was more than enough for the referee to decide that he had seen enough, and the bout was stopped with only seconds to go in the very first episode.

“I hope to have a world title opportunity very soon,” said Hernandez, who owns a formidable record in spite of his own stunning upset first-round stoppage loss to Venezuela’s Roger Gutierrez back in 2019.

In the only women’s bout of the evening, Venezuela’s Mayerlin Rivas (17-4-2, 11 KOs) made the first defense of the belt that she obtained in her last outing back in February 2020 when she defeated Laura Ledesma in Panama City in February to become a two-weight titlist (she held a bantamweight title back in 2015 and made three defenses).

Trained by Rigoberto Alvarez and under a new contract that allowed her to devote to her craft full-time, Rivas held on to her junior featherweight WBA trinket and soundly defeated Karina Fernandez, of Ciudad Juarez, Mexico, in a devastating performance.

Fernandez (17-7-1, 3 KOs) stormed out of the gates and was trying to bring the fight to the champ when she walked into a demolishing right counter shot that sent her to the canvas within the first minute of the bout. Undeterred, Fernandez kept pressing the action in the second episode, but Rivas responded with ripping uppercuts and hooks, and Fernandez started dripping blood from her nose. Referee Roberto Ramirez Jr. had Fernandez checked by the ringside physician midway through the third episode to check on her facial injury but the fight was allowed to go on, although blood continued to pour profusely from Fernandez’s face.

Finally, Ramirez (son of the namesake legendary Puerto Rican referee) used his power to stop the fight to prevent Fernandez from coming out to fight on the fourth round, waving the contest off at 0.01 of that episode.

“We have worked very hard for this dream,” said Rivas, in tears. “What a better way to return to action than under the Matchroom banner and in Mexico to boot.” 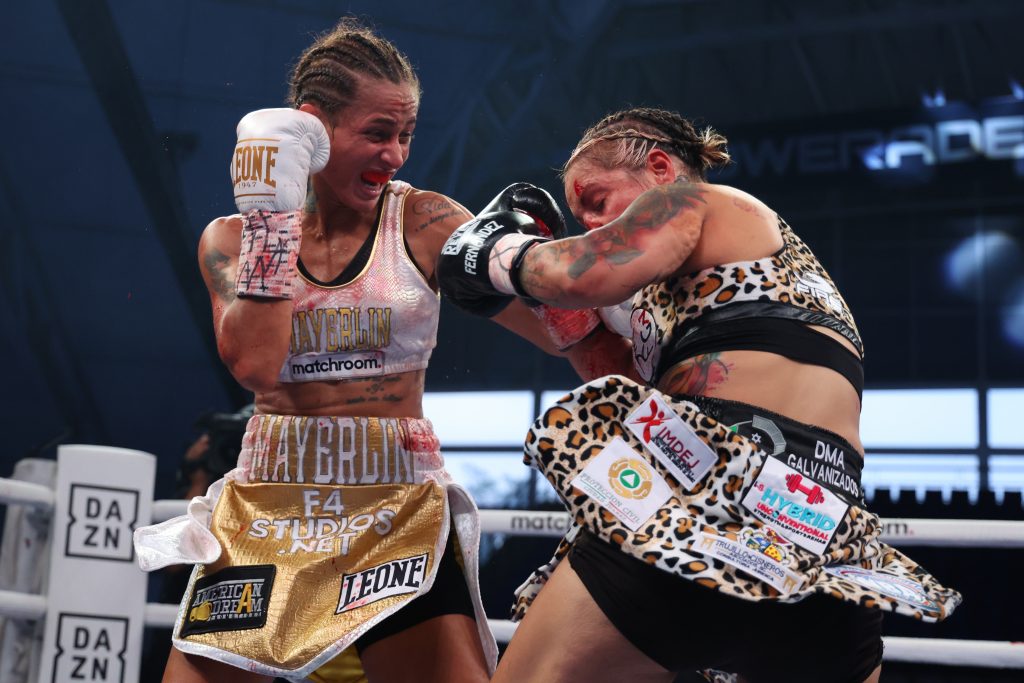 Mayerlin Rivas punches a blood-soaked Karina Fernandez during their bout on the Matchroom boxing card in Guadalajara. – Photo by Ed Mulholland/Matchroom.

Earlier in the night, Diego Pacheco improved to 15-0 (12 KOs) with a four-round thrashing of Raul Ortega.

The talented 21-year-old super middleweight prospect from Los Angeles, currently being trained in the Benavidez family camp, had a nice test in what was meant to be his first scheduled ten-rounder against Ortega (10-3, 7 KOs). Pacheco sent his foe to the canvas with one minute left in the first round, but Ortega almost returned the favor at the same moment of the next round when he caught Pacheco with a wild volley that stunned the young prospect. Only seconds later, Ortega was dropped to one knee by the delayed effect of a brutal counter body blow by Pacheco.

Ortega remained competitive in the third, but Pacheco dominated the fourth and had his foe in trouble on several occasions. The fight reached and anticlimactic ending when Ortega decided to quit on his stool at the beginning of what would have been the fifth round.

“He was a tough fighter, he took all the punishment that I gave him,” said Pacheco about his foe, who had never quit in a fight before. “Being around David (Benavidez) and all those guys, they push me every day. I am very excited for the future.” 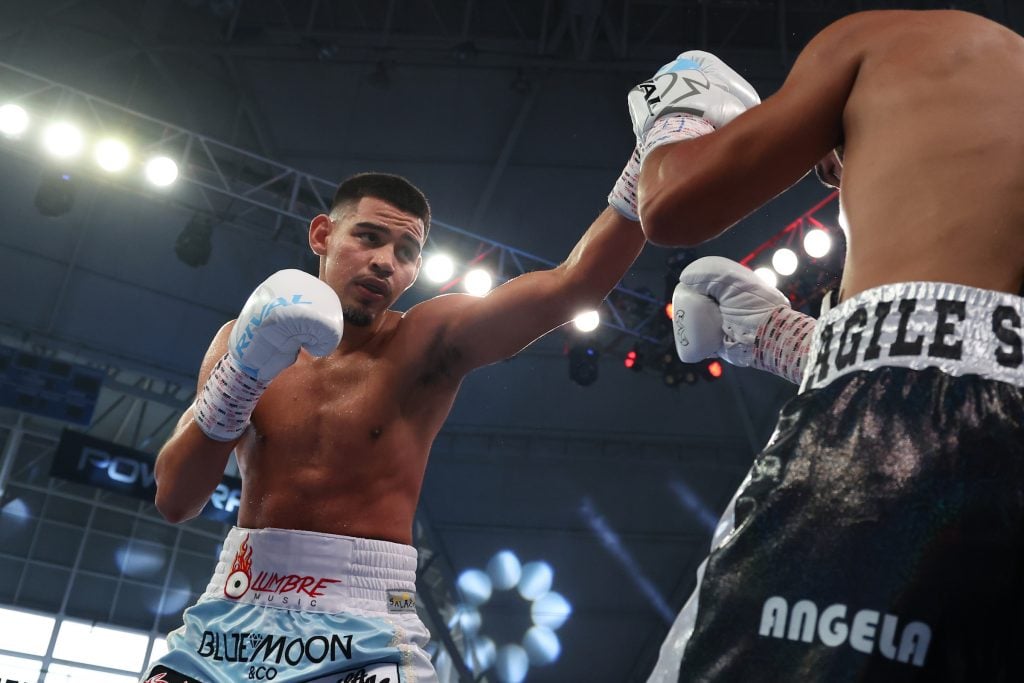 Diego Pacheco lands a straight left on Raul Ortega during their bout on the Matchroom boxing card in Guadalajara, MX . Photo by Ed Mulholland/Matchroom.

In the first bout of the DAZN broadcast, Jesus “Panterita” Martinez made his professional debut after an outstanding amateur career as a 14-time US national champion, former international amateur champion and owner of a record of 137-9. The 17-year-old from Del Rio, Texas, crashed the pro ranks at the bantamweight level and had an easy night out against Daniel Nuñez Gomez (1-2) scoring a 40-35 (twice) and 40-36 decision win.

“I don’t want to sound arrogant, but there’s no limit to what I can do,” said Martinez in the post-fight interview. 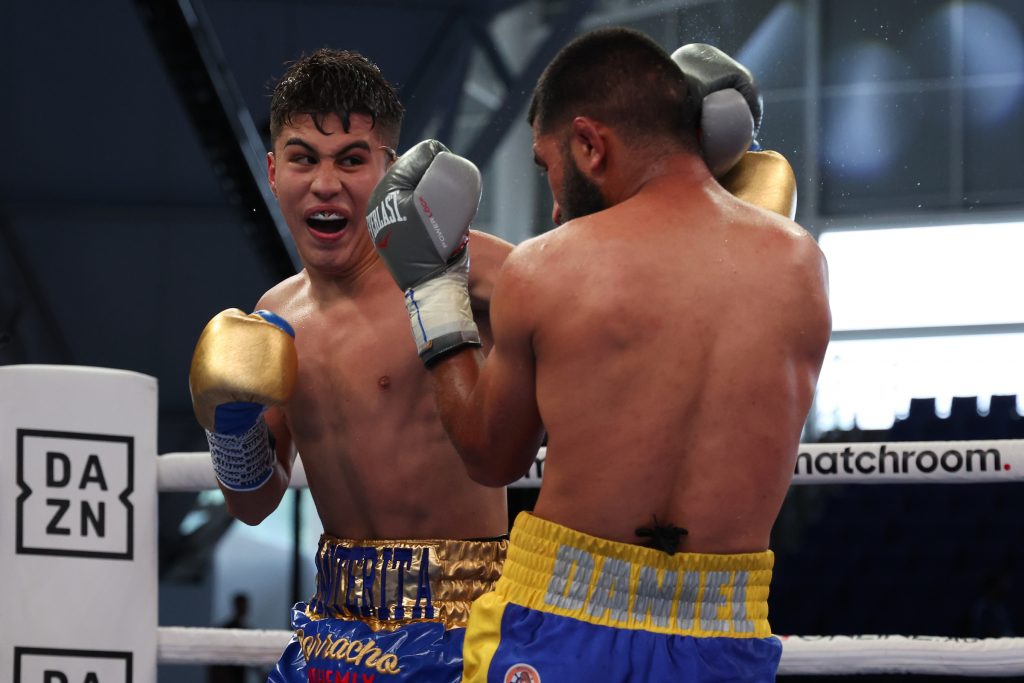 Jesus Martinez lands a hook on Daniel Nunez Gomez during their bout on the Matchroom boxing card in Guadalajara, MX . Photo by Ed Mulholland/Matchroom.

Diego M. Morilla writes for The Ring since 2013. He also wrote for HBO.com, ESPN.com and many other magazines, websites, newspapers and other outlets since 1993. He is a full member of the Boxing Writers Association of America and an elector for the International Boxing Hall of Fame. He has won two first-place awards in the BWAA’s annual writing contest, and he is the moderator of The Ring’s Women’s Ratings Panel. He served as copy editor for the second era of The Ring en Español (2018-2020) and is currently a writer and editor for RingTV.com.