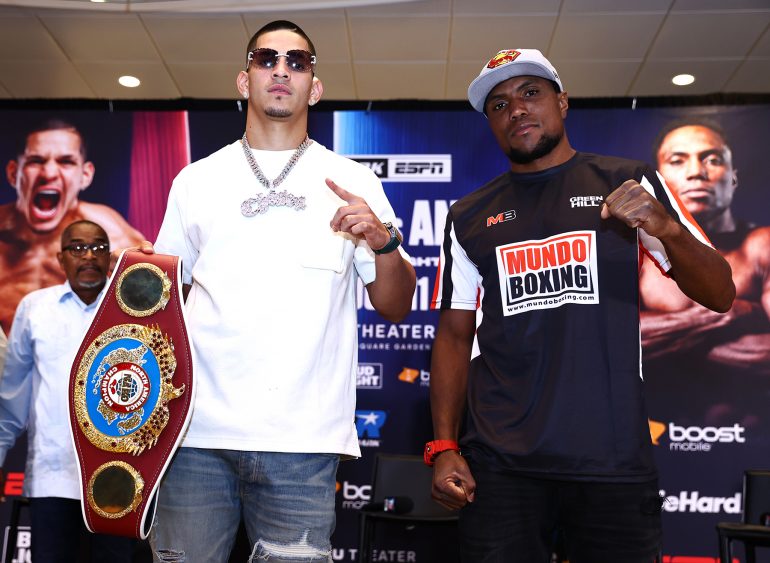 Edgar Berlanga will have a new head trainer in his corner for his first time headlining a card at The Theater at Madison Square Garden on Puerto Rican Day Parade weekend.

The unbeaten super middleweight prospect has linked up with Juan De Leon as head trainer heading into his bout this Saturday against two-time world title challenger Alexis Angulo, which will be shown live on ESPN (11 p.m. ET, first fight on ESPN begins at 7:10 p.m.).

Berlanga, a Brooklyn, N.Y. native of Puerto Rican descent, had previously been trained by fellow New Yorker Andre Rozier since 2019, but says he wants a new perspective in his corner for this bout.

“It’s just boxing, there’s no bad blood or anything. I just moved on, he moved on and I brought in Juan De Leon to train me,” said Berlanga (19-0, 16 knockouts), who has worked for the past ten weeks with De Leon.

“Uncle Dre is still gonna be Uncle Dre, he’s one of the most elite coaches out there.” 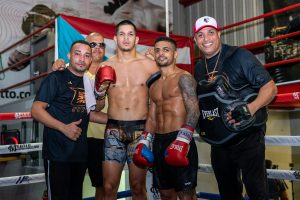 Juan De Leon (far right) with Berlanga and another of his boxer, Carlos Caraballo, among others. Photo from Miguel Cotto Promotions

Berlanga says he was introduced to De Leon through his mother’s best friend, and the two held their training camp in various parts of Puerto Rico, including at Miguel Cotto’s gym in Caguas, Puerto Rico.

Berlanga says that he was most impressed with De Leon’s passion for boxing, noting that he would speak about the sport from the moment he woke up.

“He’s passionate about this and that’s one thing that I loved about him. I feel like with that, I know he’s gonna give me 100 percent. He knows it’s my first time working with him, and he knows I gotta look good for Puerto Rican Day Parade,” said Berlanga.

“The connection, the atmosphere, the bond, everything it felt like I’ve been training with him for years.”

The switch comes after Berlanga, who began his pro career in 2016 with 13 straight first round knockouts, has gone the distance in his previous three bouts. He says that going the distance was an important part of development, and notes that he gained important experience in those 28 rounds of boxing. Against Marcelo Esteban, Berlanga had to box around suffering a torn left bicep in the third round and being knocked down for the first time in round nine before winning a unanimous decision. In his most recent bout, a 10-round win over Steve Rolls, Berlanga said he had to work for offense against a fighter who fought a defensive-minded bout.

“If you’re knocking people out in the first round, you’re not really growing as a fighter. I feel like I’ve had my ups and downs the last three fights but I’m not hard on myself. It comes with the sport.”

Against Angulo (27-2, 23 KOs), Berlanga feels he has the right opponent to showcase the rest of his arsenal. Angulo, 38, of Patia, Colombia has only lost in world title bouts, dropping a 2018 unanimous decision to Gilberto Ramirez for the WBO super middleweight title, and being stopped in ten rounds by an overweight David Benavidez in 2020 for the WBC super middleweight belt.

In addition to being older, Berlanga says Angulo has a come-forward, lunging style that will enable him to show off his boxing ability in a way few other opponents have required him to do so.

“Skills pay the bills and I feel like this fight is gonna really force me and make the people see a different side of me. A side of me that I’ve always had, which is boxing,” said Berlanga.

In addition to being younger, Berlanga has also been more active. His last fight against Rolls came in March; Angulo hasn’t fought in over a year.

Berlanga says he was advised by Puerto Rican legend Felix Trinidad to hold his camp in Puerto Rico as a way of bonding with the local population. Nothing could illustrate that bond like the time he walked into a deli in Puerto Rico asking to buy a Coca Cola, only to be turned down by a clerk who noted that he couldn’t drink one of those in training camp.

The stakes are too high for even the most minute misstep, considering how a headlining position on the eve of the Puerto Rican Day Parade down Manhattan’s Fifth Avenue has historically been an important platform to developing the popularity of Puerto Rican fighters.

Berlanga says he is currently building a home in Fajardo, Puerto Rico, and is considering relocating there full-time.

Berlanga expects to be back in the ring in December after this fight, and hopes his next bout will be in Puerto Rico. His plans beyond that will have to wait until after Saturday.

“I’m not trying to overthink Saturday, I just want to focus on this weekend, perform really good and then we can talk about what’s next,” said Berlanga.