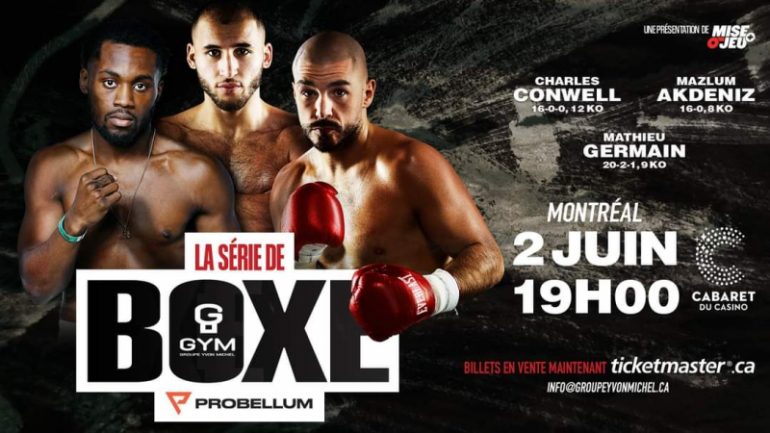 Conwell, who resides in Cleveland, Ohio, improves to 17-0 (13 knockouts) and has stopped six of his last seven opponents.

Thursday was a stay-busy fight for Conwell, as he had not fought since a stoppage win over Juan Carlos Rubio on August 29. Conwell did not demonstrate any ring rust from the opening bell, working behind a consistent jab as he walked Juarez down.

After landing several two and three-punch combinations, Conwell’s punches began taking their toll on Juarez. He dropped Juarez twice during the latter half of the second round but the game Juarez was able to made it out.

Juarez was in defensive mode in the third round as Conwell looked to close. About a minute into the round, a barrage of punches dropped Juarez in a corner. After administering an eight-count, referee Yvon Goulet stopped the bout at 1:13.

The 24-year-old was an amateur standout who represented the United States at the 2016 Olympic Games, in Rio de Janeiro. Conwell is promoted by Lou DiBella.

The southpaw Rodriguez was the aggressor from the opening bell and found success in the pocket but Akdeniz’s pedigree was the difference as the bout progressed.

Rodriguez rallied in the seventh round, battering Akdeniz, but a cut appeared over Rodriguez’s eye, likely due to a clash of heads. Akdeniz was deducted a point in the eighth round for repeatedly leading with his head, causing inadvertent clashes. Despite winning the ninth round, Akdeniz was again deducted a point, this time for throwing and landing a punch to the back of Rodriguez’s head.

Mathieu Germain, another junior welterweight from Montreal, improved to 21-2-1 (9 KOs) by defeating Misael Cabrera Urias by unanimous decision. Scores were 99-91, 97-93 and 96-94 for Germain.

In bantamweight action, amateur standout Sara Couillard, of Canada, fell short in her pro debut, losing by unanimous decision to Flor Cabrera, of Puebla, Mexico. All three judges scored the bout 40-36 in favor of Cabrera, who goes to 2-0-1.

The card aired live throughout Canada on RDS and was streamed on Probellum’s website in the United States.