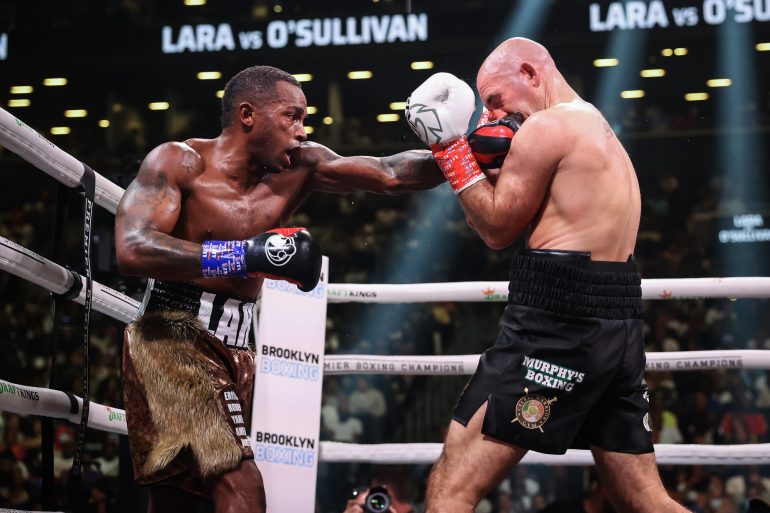 Erislandy Lara entered the middleweight rankings with his TKO of Gary "Spike" O'Sullivan. Photo by Amanda Westcott-Showtime
28
May
by Joseph Santoliquito

It was a mistake O’Sullivan kept repeating. He has the best mustache in boxing. It got a little doused and wrinkled against the accurate counterpunching southpaw Lara.

Lara (29-3-3, 17 knockouts) knocked O’Sullivan down in the fourth en route to an easy eighth-round stoppage victory to retain a WBA secondary middleweight title.

“This new style that I’m demonstrating is for all the boxers to show them how I can fight now, just being able to change up,” Lara said. “He was a tough boxer, too.

“I’m a smart boxer, a slick boxer, that’s what I did tonight. I wait until he attacks and then I do what I have to do to win the fight.”

O’Sullivan (31-5, 21 KOs) tried the same tactic of boring in on Lara, a punishing move that had its consequences, getting picked off as he came in.

By the third round, O’Sullivan’s face has a blazing red. Lara knocked O’Sullivan down in the fourth with a sweeping left, followed by a straight left, which came after O’Sullivan missed with a right.

O’Sullivan fell and rolled over before getting back on his feet. He didn’t seem hurt by the punch, more caught off balance by it.

It didn’t change much.

O’Sullivan continued pushing forward and trying to pin Lara against the ropes, which he did a in the last minute of the fifth. But Lara battled back, with a right to the body, and again using the straight left to cleave right through O’Sullivan’s defense and slam his face.

At the start of the sixth, O’Sullivan managed once again to pin Lara against the ropes and back into a corner. A minute later, the two were in the middle of the ring, right in Lara’s danger zone.

With :20 left in the sixth, Lara nailed O’Sullivan with a straight left once more.

In the final seconds of the seventh, Lara plowed O’Sullivan with what seemed like the 800th time with the straight left, this time sending him reeling back into the ropes.

It didn’t long for Lara to finish him.

With 2:40 left in the eight, Lara staggered O’Sullivan with another straight left to the face and O’Sullivan went into the ropes again in distress. Lara followed and referee Benjy Esteves saw enough and interceded, ending it at :23 of the eighth round.

“I saw the opening, he was leaving himself open and that’s when the left came in and knocked him down,” Lara said. “I saw in the eighth round he didn’t have any more power and that’s when I stepped up and showed my power.

“I want to thank the fans that came to Brooklyn, Al Haymon and Luis De Cubas Jr. for setting up the big fights that I want to have for me. I’m still a force.”