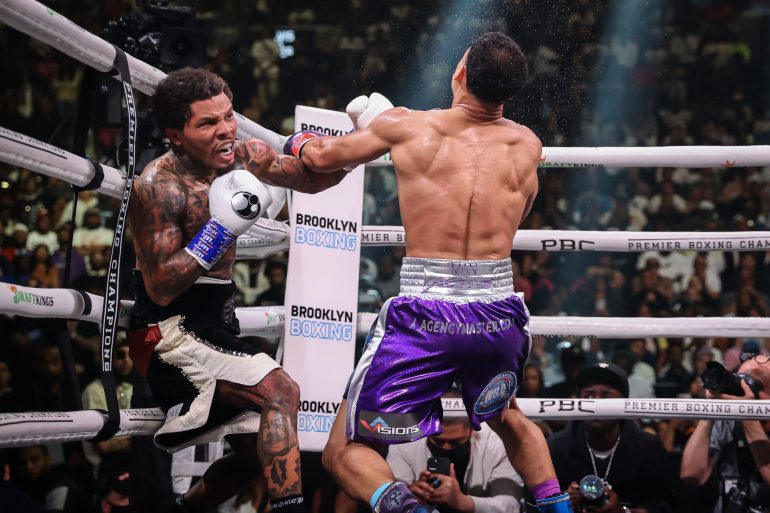 Gervonta Davis ended his competitive bout with Rolando Romero with his big left hand. Photo by Amanda Westcott/SHOWTIME
28
May
by Ryan Songalia

NEW YORK — It was a fight that had to end in a knockout, and that’s exactly what happened.

With less than a minute remaining in the sixth round, Gervonta Davis uncorked a left hand thunderbolt on to Rolly Romero’s chin, erasing what had previously been an underwhelming performance in a moment.

The shot sent Romero crashing into the ropes, causing the Barclays Center’s 18,970 in attendance to erupt in an applause that could only be rivaled by the Nets winning the NBA championship.

Davis landed one more power shot than Romero – 20 to 19 – and it was the one shot that mattered.

The finality of the knockout puts an exclamation mark on a promotion that had been marked by animosity and insults, culminating in Davis pushing Romero off the stage at the weigh-in after the Las Vegas resident disrespected “Tank” Davis by standing in front of him on the scale.

“I was thinking as this interview was coming up and as much as I wanted to be cocky, but I want to thank Rolly. I want to thank his team. We settled it like men inside the ring. I wish him the best in the future,” said Davis, who retains a secondary WBA lightweight title with the victory. 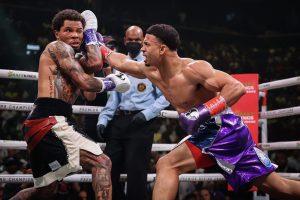 Romero had his moments against Davis. Photo by Amanda Westcott/SHOWTIME

Despite the highlight reel finish, Davis’ marked face tells the story of the tough battle that was. Davis was rocked momentarily by a sneaky left from the larger, muscular Romero in round two, and received a few extra seconds to recover as the referee warned Romero for roughhousing in close. Davis answered back moments later with a sneaky straight left as Romero walked forward carelessly.

Romero remained awkward and dangerous in round three, jumping in with right hands that opened up the door for left hooks over the top.

Davis had been scheduled to fight Romero last December, but Romero had been removed from the fight after sexual assault allegations were made public against him. Davis hurt his left hand in the fight against the replacement foe, Isaac Cruz, and appeared to hurt it again in round five. Whether he did or not, he still had enough strength in it to let it fly for the knockout punch.

Davis compared the knockout punch to the one that Juan Manuel Marquez caught Manny Pacquiao with in 2012, in a fight that also ended in round 6.