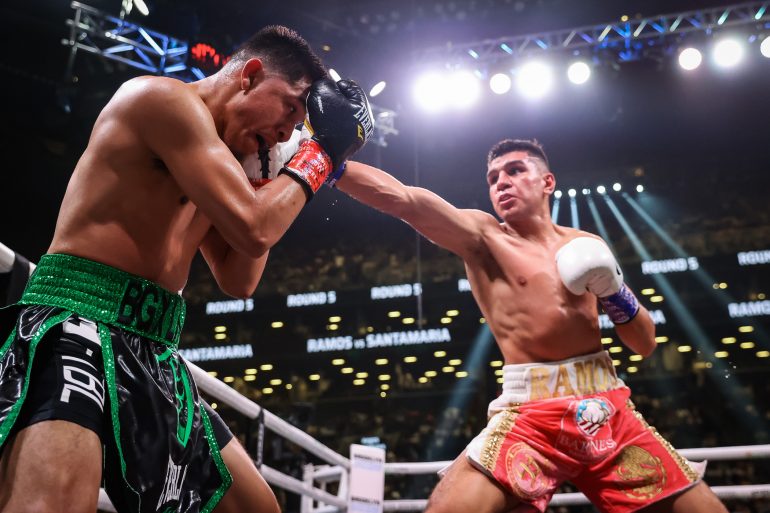 NEW YORK — Jesus Ramos had revenge on his mind, but a game plan to stick to.

The 21-year-old from Casa Grande, Arizona used his length and counterpunching to unanimously outpoint Luke Santamaria over ten rounds at Barclays Center in Brooklyn, New York, avenging his uncle Abel Ramos’ loss from earlier in the year. The scores were 98-92 on two cards and 97-93 on the third in the junior middleweight bout.

Instead of allowing his emotions to carry him, Ramos (19-0, 15 knockouts) stuck to a game plan to box while keeping Santamaria (13-3-1, 7 KOs) reaching from the outside. While Ramos, 21, may not have produced a highlight-reel finish, he earned back familial bragging rights against the Garden Grove, Calif. native.

The loss ends Santamaria’s streak of upsets at two, which included wins over Devon Alexander and Abel Ramos.

The pay-per-view portion of the card kicked off with Eduardo Ramirez grinding out a majority decision win over the more explosive, but less experienced Luis Melendez. Scores were 95-95 on one card, which was overruled by a 96-94 score and a far too wide 98-92 for Ramirez (26-2-3, 12 KOs) of Los Mochis, Mexico.

Ramirez, who missed weight prior to his lone title opportunity, a unanimous decision loss to then-IBF featherweight titleholder Lee Selby in 2017, says he believes this win should earn him a title shot.

“The first few rounds were even, but after that he only had his jab,” said Ramirez. “I was able to hurt him. He tried to win going backwards and that’s no way to win.”

Melendez (17-2, 13 KOs) of Miami, Fla. by way of Puerto Rico looked headed for an early victory, landing hard, flashy uppercuts and counter punches against the much slower, but poised Ramirez. Ramirez hung in tough, and by the sixth round it was Melendez who was running on fumes.

Ramirez had his best round of the fight in the eighth, pressuring Melendez and rocking the youngster with straight lefts and right hooks. Compubox credited Ramirez with landing 28 of 68 punches.

Melendez made one final stand in the tenth, getting the better of the action.

The margin in the fight came down to experience: Melendez had the prettier looking record and style but had gone the ten round distance once, against Yogi Herrera in Colombia a year ago. Ramirez, 29, made his name in those longer fights, including a win last December over former title challenger Miguel Marriaga in his most recent outing.

“I felt I won the fight. It’s part of the game,” said Melendez, who loses for the first time since his third pro bout. “You just have to go back and keep training and just come back better.”

In earlier action, welterweight Jalil Hackett (4-0, 3 KOs) scored a second round stoppage of previously unbeaten Jose Belloso (4-1, 4 KOs) at the 2:20 mark of a six-rounder.

Welterweight Arnold Gonzalez (10-0, 5 KOs) opened up the card with a six-round split decision over Tracy McGruder (6-3, 4 KOs). Two judges scored it 58-56 in favor of the Harlem native Gonzalez, who had made his name as a sparring partner for Manny Pacquiao. The third had it 59-57 for McGruder.