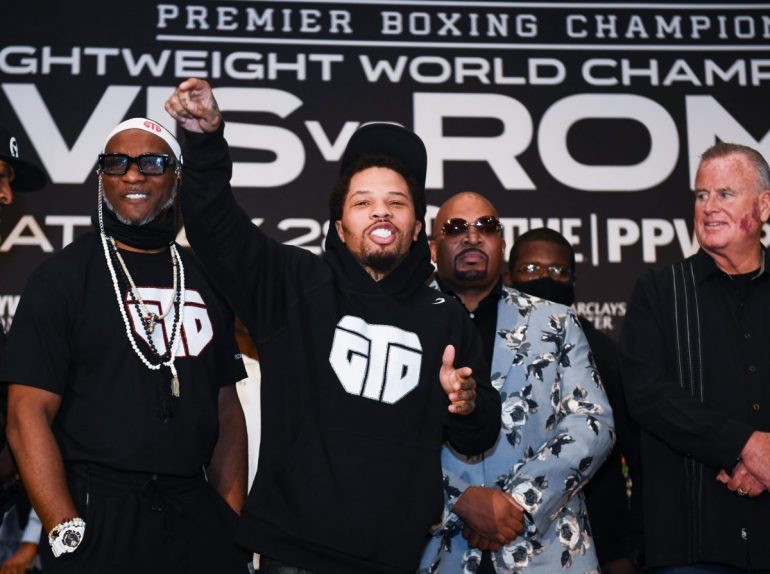 Tank was quiet but confident during the final press conference. Photo by Matthew Heasley / Mayweather Promotions
27
May
by Joseph Santoliquito 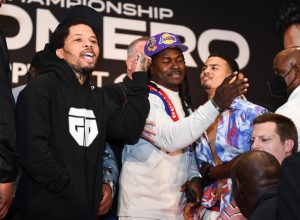 A mature and mellow Gervonta Davis brushed off insults from Rolando Romero at their final press conference. Photo by Matthew Heasley / Mayweather Promotions

Tank wears a smile these days more often than a smirk. The iron-hot hate between the 27-year-old power punching southpaw from Baltimore, Maryland, and Romero is real. Both will attest to that. And Romero possesses great verbal dexterity. But Tank has handled Rolly’s antics in a very comical way.

Weeks ago, Davis was candid as to why.

“I think that comes with time,” he said. “I’ve been boxing since I was five. I know and trust the people around me. I have a great team around me when I fight. (Trainer) Calvin (Ford) tells me what to do and what to watch out for and I do it. The man has been like a father to me, watching over me and making sure I do the right things in and out of the ring. I think I’m calmer than I used to be. Someone would tell me something or saying something to me and it would be blah, blah, blah, I’d go off. I step back now. Hey, there are still things that I’m learning as I walk this path. But I’m maturing. I have the same people that I had started with. You can’t beat that. There is nothing else to say except Saturday night is ‘Rolly’s’ due date is coming.”

So, Davis has learned to slow everything down.

When asked what will happen this Saturday when he faces Romero, he says tersely, “a massacre.”

Davis took it further on Thursday, when asked about Rolly’s helter-skelter, quasi-Ricardo Mayorga style, he said: “This is going to be fireworks. It’s going to be crazy in there. I just hope he doesn’t use his elbows like he does a lot. I don’t think he’s awkward. I just think he’s a guy who just started fighting. He’s like someone who just came into the gym. He’s like someone who thinks he’s nice now even though he hasn’t gotten it down pat yet. Real fighters know awkward fighters, he’s just a dumb fighter.

“I just want to show people that there are different levels when it comes to boxing. There are people that play boxing and there are people who have been doing this since they were kids. It’s time to show that I’m one of the guys who’s not to be played with. It starts with him and it’s going to continue.” 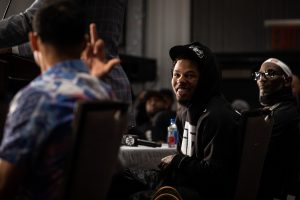 As mature as Davis has been, Romero has gone out of his way to be immature as evidenced by this middle finger salute. Photo by Amanda Westcott / SHOWTIME

On Thursday, Romero continued his verbal assault on Davis, following up what he exclusively told Ring last week, telling the assembled media. “This guy Davis talks about everything but the fight. He’s taking this fight personally. My job is just to beat him up. He’s very emotional. That’s why I’ve been calling him out. He has a big head for me to hit. I’m not going to say what punch I’m getting him with, but you’re all going to see on Saturday night. This is ending in one round.

“I’m ready to get violent in the ring. I’m smiling right now, but Saturday is going to be different. I feel extremely calm in the ring. I get into ‘Rolly’ mode. He never knows what to say or how to react to anything. He’s taking this fight too serious. When have you seen him this skinny before a fight? He’s scared of me.

“You guys are going to see ‘Tank’ get knocked out in one round Saturday night at Barclays Center. Nothing else needs to be said.

“I got to this point faster than anyone else and I’m here for a reason. I’m the new face of boxing and everyone is going to see on Saturday when I knock ‘Tank’ out.”

When they stood for the ceremonial staredown, Davis jawed and pointed at Romero. But the two walked away without any ensuing craziness that could have jeopardized the fight.

A few years ago, it might not have gone that well.

Tank Davis himself would agree.