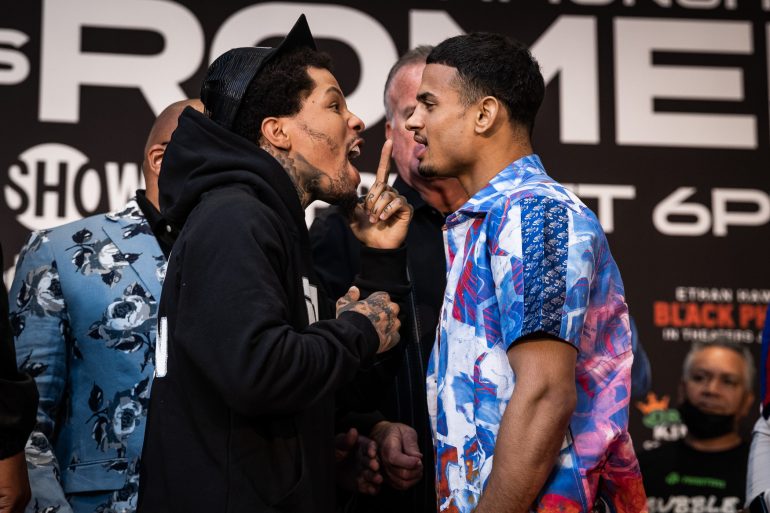 Five-time world champion Gervonta “Tank” Davis, and No.1 ranked contender and mandatory challenger Rolando Romero squared off at a tense final press conference Thursday before they meet in the Showtime PPV main event this Saturday, May 28 headlining a Premier Boxing Champions event from Barclays Center in Brooklyn.

The unbeaten rivals headline the PPV telecast beginning at 9 p.m. ET/6 p.m. PT and restated their intention to close the show Saturday night in emphatic style. Davis will return to the sight of his 2017 knockout over Jose Pedraza that saw him capture his first world title and offer the first glimpse at the box office sensation he would become.

Tickets for the live event, which is promoted by Mayweather Promotions, GTD Promotions and TGB Promotions, are on sale now and can be purchased through seatgeek.com and barclayscenter.com. Tickets are also available for purchase at the American Express Box Office at Barclays Center.

Here is what the press conference participants had to say Thursday from Brooklyn Marriott: 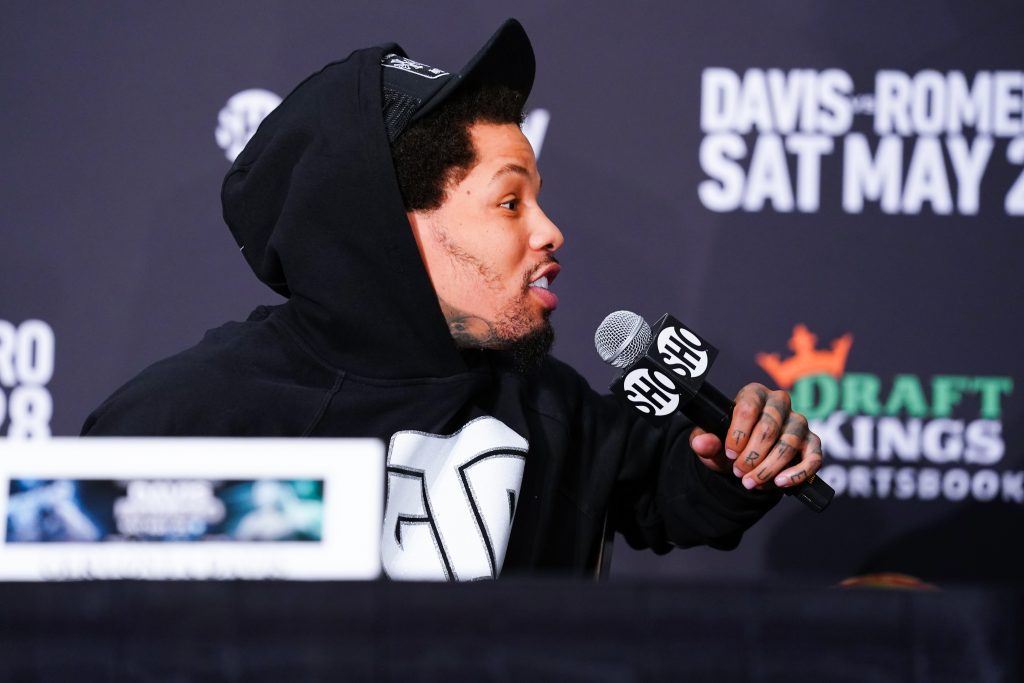 “I want to thank everybody for coming out. I appreciate everyone who came out today and everyone who made this fight happen. I’m ready and I’m happy to be at this point. The talking is over and the time for fighting is now.

“We’ve been working hard in camp and we know that ‘Rolly’ is going to come out in round one and try to knock me out like he said. I’ll be ready for that. I’ll see everyone Saturday. The time is here and I’m ready.

“I’m excited to be back in Brooklyn and back at Barclays Center. This is a great city that always shows me love. It’s always been like a second home to me. I’m grateful to be back.

“I won my first title here in Brooklyn and then won a second title at Barclays Center as well. I feel like this fight at this arena is great for boxing.

“I’m maturing and I’m still learning as I walk this path. I have the people that I started with around me and I’m grateful. Nothing else to say except Saturday night is ‘Rolly’s’ due date.

“This is going to be fireworks. It’s going to be crazy in there. I just hope he doesn’t use his elbows like he does a lot.

“I just want to show people that there are different levels when it comes to boxing. There are people that play boxing and there are people who have been doing this since they were kids. It’s time to show that I’m one of the guys who’s not to be played with. It starts with him and it’s going to continue.” 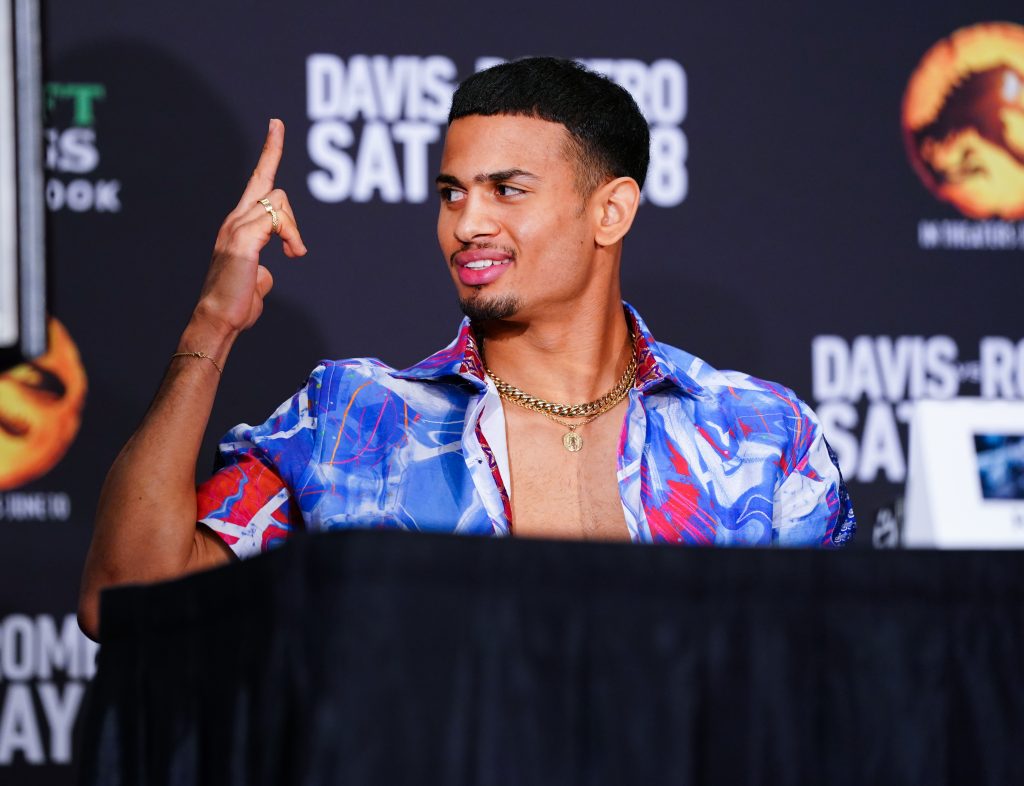 “This guy Davis talks about everything but the fight. He’s taking this fight personally. My job is just to beat him up. He’s very emotional. That’s why I’ve been calling him out.

“He has a big head for me to hit. I’m not going to say what punch I’m getting him with, but you’re all going to see on Saturday night. This is ending in one round.

“I’m ready to get violent in the ring. I’m smiling right now, but Saturday is going to be different. I feel extremely calm in the ring. I get into ‘Rolly’ mode.

“He never knows what to say or how to react to anything. He’s taking this fight too serious. When have you seen him this skinny before a fight? He’s scared of me.

“You guys are going to see ‘Tank’ get knocked out in one round Saturday night at Barclays Center. Nothing else needs to be said.

“I got to this point faster than anyone else and I’m here for a reason. I’m the new face of boxing and everyone is going to see on Saturday when I knock ‘Tank’ out.

“All ‘Tank’ does is the same basic pad work like everyone else. They all get knocked out when they run into a big puncher. Just like his guy Adrien Broner, this is going to be an Adrien Broner vs. Marcos Maidana sequel.

“I’m going to go in there and hit him with one punch and we’re going to be done.” 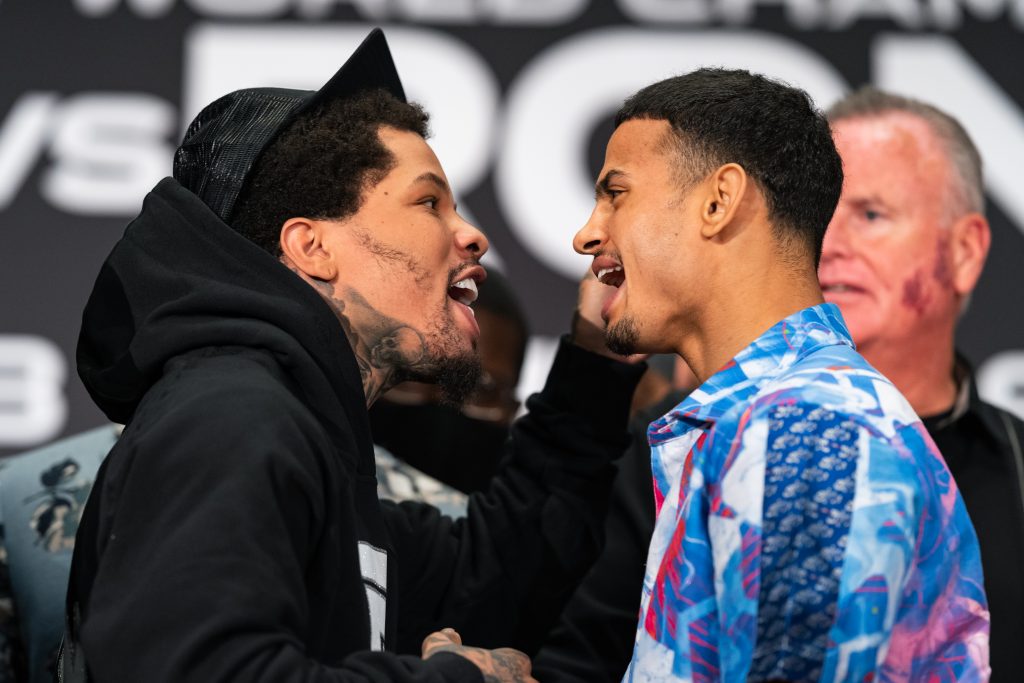 “Saturday night can’t get here fast enough. I’ve been in and around this sport for well over 45 years and I can honestly say that this is one of the most anticipated fights that I’ve been involved with.

“Come Saturday night, somebody is going to lose and somebody is getting knocked out. I know both guys are in tremendous shape. They’ve had excellent camps. No matter what anyone says, both guys have gotten up for this fight.

“In my eyes, this is a very dangerous fight for both guys. Sometimes there is a person who is supposed to win, but it doesn’t come out like that. Sometimes that person gets it done.

“Over the last year we’ve all seen Canelo Alvarez, Manny Pacquiao, Mikey Garcia, Teofimo Lopez, Anthony Joshua and Chris Colbert all came into their fights knowing they were going to win the fight, and somehow they came up short.

“When you look at ‘Tank’, he’s doing exactly what he’s supposed to be doing. He’s one of the best fighters in the entire world. When you look at ‘Rolly’, a lot of people talk about what he can’t do, but from experience, that looks different when you’re up in it in the ring.”

“This is the third fight on a very intense six-week stretch of high-level boxing on SHOWTIME. It is part of an incredible run of top tier fights on the network. Now, we have this grudge match between one of the sports brightest young stars in Gervonta Davis, and his most heated rival, the power punching K.O. artist Rolando Romero.

“No other network is televising more meaningful, high stakes and entertaining fights. These guys all watch each other’s fights and they’re competitive and no one wants to put up a boring fight. I’m very confident that this streak of stoppages will continue. Neither fighter wants this to go 12 rounds.

“This will be ‘Tank’s’ 12th time fighting on SHOWTIME and we’re thrilled to have watched him grow up and mature into one of the biggest stars in boxing. When ‘Tank’ fights, it’s an event, and this one may be the most exciting one yet.

“When you talk about the young stars of boxing, ‘Tank’ is in a class by himself. There isn’t another young fighter in the sport who generates the buzz and excitement that ‘Tank’ does. But none of that matters on Saturday night.

“Romero has proven himself on SHOWTIME before. You can call him awkward or unorthodox, you can say anything you want. One thing you can’t argue with is ‘Rolly’s’ power. That’s what has everybody so intrigued.”

A press release by Showtime/Mayweather Promotions/TGB Promotions was used in this article.