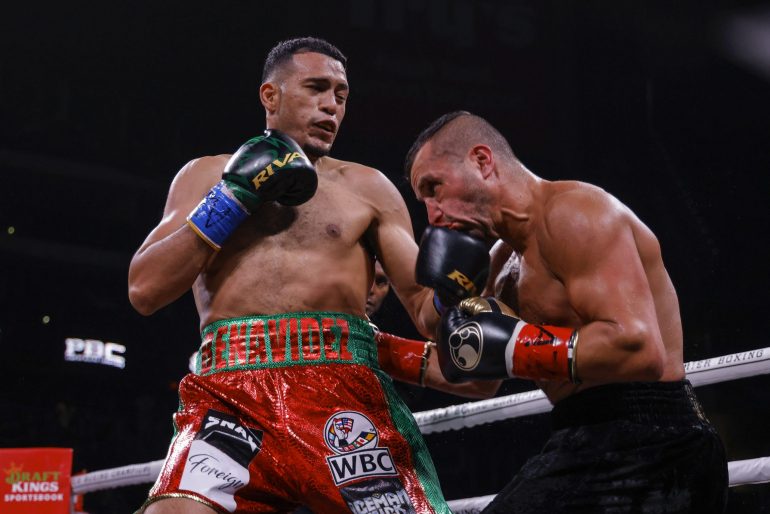 I
21
May
by Joseph Santoliquito

David Benavidez was in serve-notice mode. Anyone at 168 better watch out, because the rangy 25-year-old from Phoenix, Arizona, will be coming your way.

Benavidez, The Ring’s No. 1 super middleweight contender, chopped up gallant David Lemieux, ranked No. 6 By Ring, in three dominant rounds on Saturday night to claim an interim title in a PBC event on SHOWTIME Championship Boxing from the Gila River Arena in Glendale, Arizona.

The official end came at 1:31 of the third, after Lemieux’s corner stopped it.

“Mike Tyson gave me the name ‘The Mexican Monster,’ what do you think I’m gonna do?” Benavidez said. “I just feel like I’m the strongest 168 pounder. No one can mess with me.”

To his credit, Lemieux kept coming at Benavidez (26-0, 23 knockouts), despite being out on his feet. 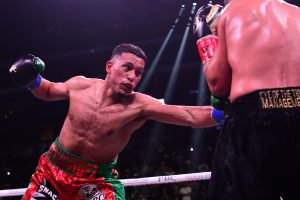 “Lemieux is a special type of breed,” Benavidez admitted. “This guy was swinging until the end. I had to be on my p’s and q’s. He’s a tough champion, so my hat’s off to him. He’s the only one with the guts to face me.”

“I’m waiting for all those top guys to send me the contract,” Benavidez said. “They know what’s up. I’m right here waiting for them. I’ll put myself up against everyone. I guarantee I’m knocking everyone out.

“I can get better everywhere. You can always learn. It only gets better from here. I’m just going to keep working. Facing tough guys like Lemieux just pushes me to keep moving to the next level.”

Lemieux (43-5, 36 KOs) tried applying pressure early on Benavidez, who even got nailed against the ropes with a left hook within the first minute of the fight. It did not take long for Benavidez to settle.

Once he found his distance, he caught Lemieux with a left hook to the chin and sent the Canadian stumbling backwards. Lemieux was never able to recover.

.@Benavidez300 DROPS Lemieux into the ropes in RD 2 💥👀#BenavidezLemieux pic.twitter.com/02rBcFMhyx

Lemieux staggered in the second round and was severely cut over his left eye. By the third, Lemieux showed great character coming at Benavidez, who slammed a left hook followed by an overhand right with 1:35 left in the third.

Bloodied, staggered, Lemieux’s corner threw in the towel, ending it at 1:31.

“I’m good, Benavidez is a hell of a fighter,” Lemieux said. “I congratulate him. After the first round I was okay, he had gotten me with some good shots. I tried to come back, but he’s a very good fighter.

“We’re going to talk with my team about what’s next, but tonight was just not my night. All respect to Benavidez. He’s a hell of a fighter.”

In the co-feature, junior middleweight southpaw Jorge Cota may have complained a little about fighting someone “who only had five fights,” but the 34-year-old veteran was forced to rethink that after meeting Cuban southpaw Yoelvis Gomez. 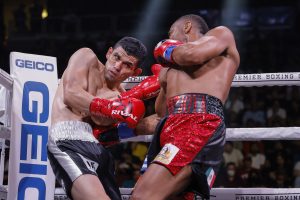 The 24-year-old Gomez won by unanimous scores of 100-90 across the board in going the distance for the first time in his career.

“I wanted to steal the show tonight, and all Mexicans are warriors, and (Cota) was a warrior and he took me the 10 rounds,” Gomez said. “What I found out is you have to be prepared for 10 rounds, and I was prepared tonight for this fight. If the knockout  comes, then it comes. But it didn’t come tonight.”

Cota’s best punch of the night might not have even been on Gomez. In the last minute of the third, Cota tried to sneak in a final shot in and hit referee Wes Melton in the chest by accident.

“The judges’ decision was what it was, it’s pointless to talk about it now,” Cota said. “Yoelvis is a strong fighter and he hit me hard on my left rib, I think he hurt me there. I’ll get some X-rays to see what the damage was.

“He kept up his consistency and his punching power throughout the entire fight. I was at 50% after the rib injury, but credit to him for having fought like he did.”

Judges Chris Flores, Dennis O’Connell and Gonzalo Valenzuela all scored it  96-94 for Nunez.

“I feel great, and this was another positive step forward,” Nunez said. “I kept my distance, hit him when I had to and built up my equity round by round. What’s next? In ready for anybody. Bring them on.”

The theme of the fight was simple: Fierro tried connecting with straight lefts, and Nunez would counter him as he closed in.

Fierro had some good moments, like in the fifth and 10th rounds. But the fight was primarily Nunez backing up Fierro and landing some crisp shots to the head, as he did in the seventh.

“I beat him, but there was favoritism,” Fierro claimed. “The ref was clearly on his side, constantly interrupting the fight. I would have knocked him out, otherwise. I want the rematch. In fact, he should be the one giving me the rematch, because the decision by the judges wasn’t the right one.”