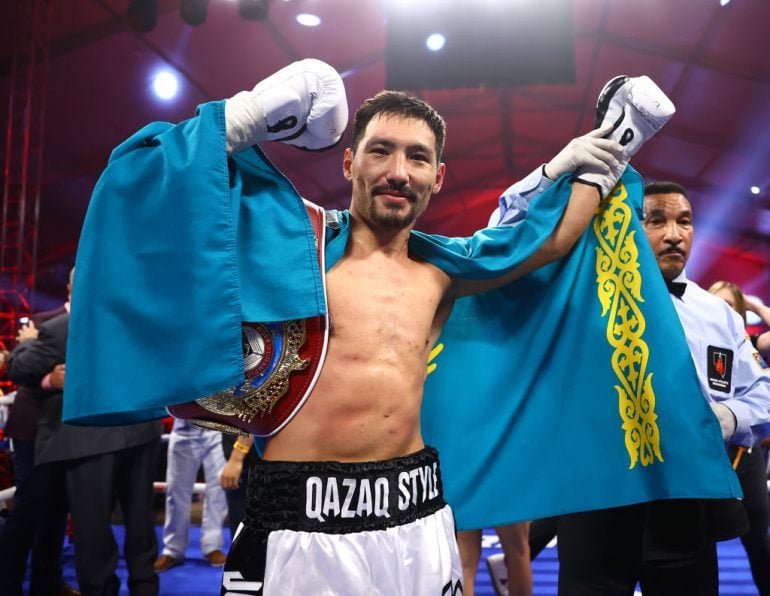 Janibek Alimkhanuly celebrates after stopping Danny Dignum for the WBO interim middleweight title at Resorts World Las Vegas on May 21, 2022 in Las Vegas. Photo by Mikey Williams/Top Rank Inc via Getty Images
21
May
by Michael Montero

Janibek “Qazaq Style” Alimkhanuly dominated an outclassed Danny Dignum over two rounds, scoring a second round knockout tonight in Las Vegas. The 2016 Olympian from Kazakhstan dropped Dignum once in the first and slept him with a monster left uppercut in the second. It was target practice from the opening bell.

With the win, Alimkhanuly (12-0, 8 knockouts) now holds the WBO interim middleweight title. He would love a crack at current 160-pound WBO titleholder Demetrius Andrade next but that fight is highly unlikely. 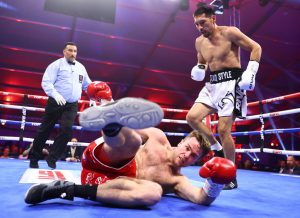 “I want to thank all my fans who came here to support me tonight,” he said moments after the bout, which served as the main event of a “Top Rank on ESPN” broadcast. “I didn’t even show my best punches yet; they will be coming in future fights.”

Added trainer Buddy McGirt, “He gets better with each fight, each training camp, because he’s willing to learn. When we start camp, he tells me what he wants to work on and we do it.”

“I want to tell every champion in this weight class that I am here waiting for you. I am asking every middleweight champion to come and fight me,” said Alimkhanuly.

Well, every middleweight titlist other than unified IBF/WBA titleholder Gennadiy Golovkin, that is. When asked about his fighting his countryman, Alimkhanuly said it is not possible.

“In our tradition, when you are younger, you cannot call out somebody who is older. I hope he moves up to 168 pounds because I want to win all of the belts in the 160-pound division.”

Alimkhanuly (pronounced “A-lim-han-a-lah”) was a massive favorite tonight and took care of business against Dignum. Now fans want to see how he looks against the elite. The question is whom – if anyone – will want to fight this man?

Janibek Alimkhanuly is about to become the most avoided fighter in boxing.