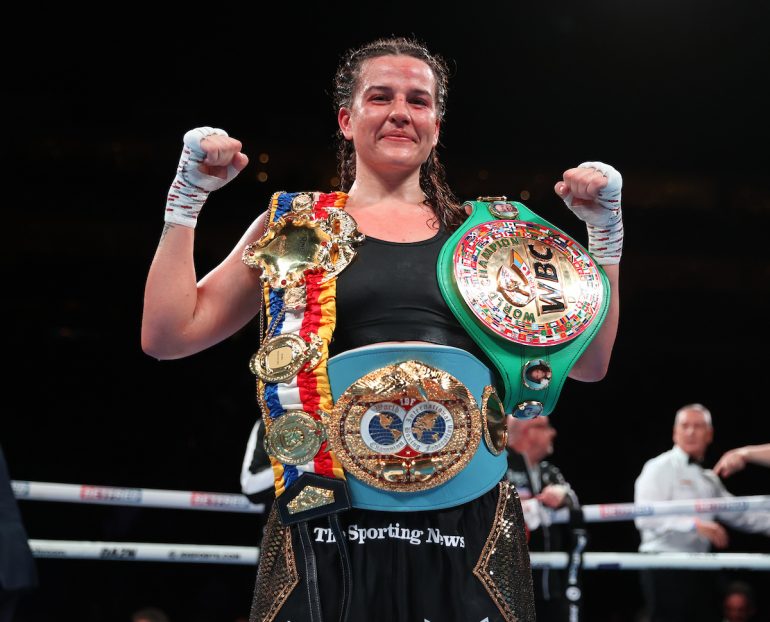 The Ring’s super-lightweight champion and the undefeated and unified WBC and IBF ruler Chantelle Cameron had too much of everything for Argentina’s game but outgunned Victoria Bustos.

It was one way traffic, though Bustos should be applauded for sticking with the grim task at hand and hanging in there.

“She’s got a head like a brick,” said Cameron’s trainer, Jamie Moore before the ninth round.

Bustos was getting busted up and she was badly marked under her right eye but she made it through the last round to hear the final bell. All three judges scored it 100-90.

Big-punching Croat cruiserweight Alen Babic went the distance for the first time and is now 11-0 after winning the WBC Silver title at bridgerweight.

Poland’s now 16-2 (9) Adam Balski put Babic down early in the first round from a left hook high on the head, or possibly behind the ear, but Babic rose and battled back.

It was typical Babic fare, wild, crude and desperately exciting.

In one frenetic exchange in round two, Balski was nailed by a left hook but in the subsequent firefight he steadied Babic with a big right hand.

Balski slowed in the third but was still game, even though his tank was running low. It was a big round for “The Savage” but there was still time for some intense trading in the fourth, towards the end of the session.

The seventh was the first time Babic had gone that far in a fight and he was still looking to finish Balski in the eighth, when he rattled him with another left hook.

As the bell sounded to end the ninth, Balski landed a right hand as Babic momentarily switched off.

Babic was stiffened on the spot and wouldn’t have been able to continue but for the break.

As the 10th started, referee Victor Loughlin deducted the visitor a point for the late infraction and while Balski won the final round, they both swung for the fences to close the show.

Balski lost his mouthpiece as they traded leather and his right eye was almost swollen shut. Babic bled from a cut over his right eye. It was thrilling, it was fun, it was not the sweet science and no one cared. These two should do it again, but you’d have to be a sadist to pair them together once more.

There were two scores of 97-91 (too wide) and one of 95-93 but no one will be talking about the cards, even though Babic went the distance for the first time.
Catford prospect Ellie Scotney is now 5-0 after a commanding win over Argentine Celia Roman.

Scotney has fast hands and feet and a good boxing brain. She thinks equally fast and was too lively and just too good for the 39-year-old veteran winning by 100-90 and two scores of 99-91.

Scotney, trained by Shane McGuigan, is one of the hottest prospects around.

Liverpool’s Robbie Davies, son of the excellent fighter by the same name, manged only a muted celebration after a close split decision win over Javier Molina.

Davies, coming off a one-sided victory over Hank Lundy in his previous fight, won by margins of 97-94, 96-94 with the other card favouring Molina 96-94.

After the fight, Davies said the 97-94 card in his favour was too wide and he deserves credit for calling it out.

Molina, from Norwalk, California, started with confidence and poise but Davies applied pressure throughout.

Molina’s counters were crisp and precise but Davies wasn’t without his own successes.

The sixth round was arguably the best of the contest as Davies pinned Molina on the ropes and tried to take control on the inside but he was hurt in the eighth by a right hand-left hook.

It wasn’t a bad match. It was close. Molina’s team thought he’d won and perhaps they deserved it with the cleaner work but Davies didn’t stop and kept coming and Molina, who bled from a cut on his scalp, is now 22-5 (9) while Davies improves to 23-3 (9).

Former Team GB amateur star Cheavon Clarke is now 2-0 following victory over Pawel Martyniuk, whom he stopped in round three of six, having floored the Pole twice.