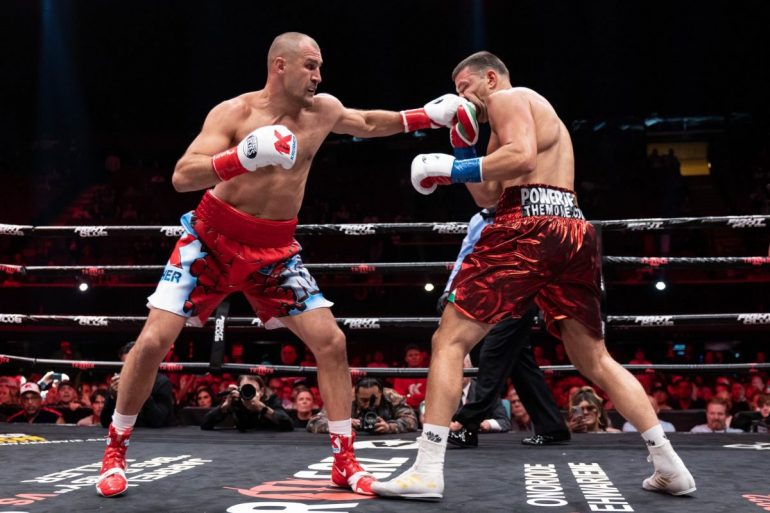 Even at 39 and coming off a 31-month break, Sergey Kovalev still flashed a world-class jab vs. Tervel Pulev. Photo by Sye Williams / Triller Fight Club
15
May
by Ring TV

Sergey Kovalev returned to the ring for the first time since his 2019 loss to Canelo Alvarez on Saturday and outpointed previously unbeaten Tervel Pulev in his cruiserweight debut in front of a huge crowd at the Kia Forum in Inglewood, California.

Working behind his trademark piston-like jab, Kovalev would control the majority of the action throughout the fight against the frustrated Pulev. The middle rounds saw him utilize heavy handed combinations to batter the valiant Pulev who did his best to counter.

Trainer Buddy McGirt exhorted Kovalev between rounds to stick to the game plan and use the proper distance when working off the jab which his charge followed perfectly towards the wide decision.

Said Kovalev after the victory, “I’m just going to keep in shape after this fight, we’ll rest one week and then get back in the gym. I worried how it was going to be in the fight, of course there was some ring rust. Without boxing at a high level for over a year, my body doesn’t like this. I want to fight every three or four months. The plan was just to use the jab and distance. But I felt like I didn’t have enough energy in my body. I think in my next fight, it would be at a higher level. Give me one more fight, and I’ll be ready for a world title opportunity.”

Pulev controlled the pace from the outset of the ten-rounder using a stiff jab and powerful right hands to hurt the defensive minded Forrest. Forrest turned the tide temporarily in the third round landing a huge left hand to Pulev’s temple.

The fourth round saw Forrest rocked twice from huge right hands from Pulev. Although the valiant Forrest would have his moments sporadically over the course of the fight, Pulev racked up rounds throughout the fight with one-two combinations as his right hand did a continuous amount of damage.

“I’ve had a lot of fights during my career as an amateur and professional that prepared me for Forrest. He was not fighting clean however, using his head throughout the fight,” said the victorious Pulev. “I want a better opponent next time, a top ten fighter. I want to be a world champion.”

Pro debuting Emiliano ‘The General’ Vargas, (1-0, 1 KO), made his pro debut a highly successful one. The 18-year-old amateur standout lived up to his billing, using fast, vicious left hands to knockdown and stop Mark Salgado, (1-2-1, 1 KO), at 2:09 of the first round.

Said the charismatic Vargas, “I just listen to my Dad and work hard in the gym, we had a phenomenal training camp. The Vargas Dynasty is here to stay. Thanks to my Dad and my beautiful Mom for all their support.”

In a huge upset fighting in the super welterweight division, Jurmain McDonald, (7-5, 3 KOs), stopped Evan ‘Yung Holy’ Holyfield, (9-1, 6 KOs) in the second round (1:56). A huge right hand to the jaw would drop the son of boxing legend Evander Holyfield as referee Raul Caiz Jr. called a halt to the fight as the count reached eight.

“My trainer told me to throw that punch when I could and he would go down.” said McDonald. “I knew he wasn’t getting up, he was badly hurt. I’m actually speechless, I’m so happy.”

Super welterweight Fernando ‘El Feroz’ Vargas Jr., (6-0, 6 KOs), stayed undefeated with a resounding first round knockout of Terrance Jarmon, (3-0, 1 KO). The heavy-handed southpaw earned the victory as he dropped Jarmon three times in the opening stanza, all from huge left hands with the bout being halted at the 0:36 mark.

Stated Vargas Jr., “I listened to my Dad who said to go to the body first. It’s one fight and now it’s on to the next one. I did what I needed to do against a tough fighter.”

Opening up the event, 21-year-old Amado ‘El Malvado’ Vargas, (4-0, 2 KOs) stayed perfect showcasing his world class skills towards a four round unanimous decision in the junior lightweight division over Anel Dudo, (1-4-1, 1 KO). All three judges scored the bout 39-36 for Vargas.

“My Dad told me to keep boxing and be smart, I’m very happy with my performance, I thought I won every round,” said Vargas.