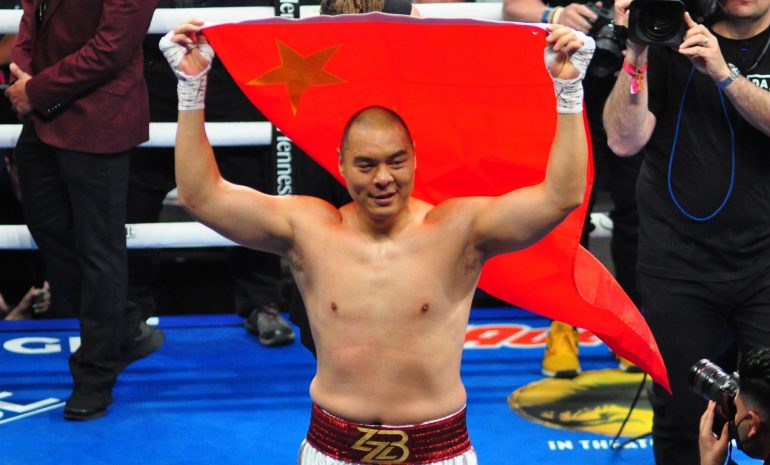 Zhang Zhilei. Photo by German Villasenor
07
May
by Doug Fischer

LAS VEGAS – Chinese heavyweight hopeful Zhang Zhilei kept his dreams of one day challenging for a world title alive with a one-punch opening-round KO of late-sub Scott Alexander on the Canelo Alvarez-Dmitry Bivol undercard on Saturday at T-Mobile Arena. 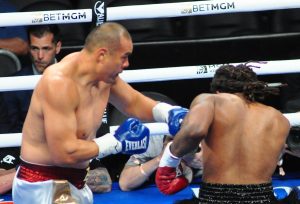 The scheduled 10-round heavyweight attraction was the opening bout of the DAZN PPV broadcast.

Zhilei (24-0-1, 19 KO), a southpaw former amateur standout, put his massive 6-foot-6 frame to good use with a perfectly-timed straight left that deposited Alexander (16-5-2, 8 KOs), a journeyman from L.A. who had never been stopped, flat on his back and unable to continue. The bout was waved off at 1:54 of the round.

What a way to get the night started 😳

Alexander filled in for Filip Hrgovic, who withdrew from the fight just five days ago due to the recent passing of his father. Hrgovic, who is The Ring’s No . 9-rated heavyweight, would have been the first legitimate contender the 39-year-old Zhilei has faced in his eight-year career.

A victory over the highly touted Croatian would have vaulted Zhilei up the sanctioning body rankings and in position for his dream shot at whoever holds the heavyweight belts if and when he reaches that point. There’s talk that Zhilei-Hrgovic can be rescheduled later this year.