Montana Love slides by Gabriel Valenzuela on the Alvarez-Bivol undercard 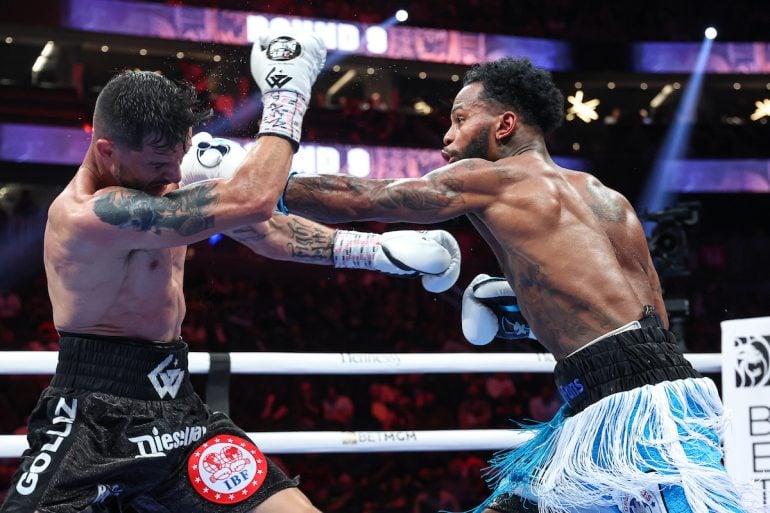 May 7, 2022; Las Vegas, NV, USA; Montana Love and Gabriel Valenzuela during their bout at the T-Mobile Arena in Las Vegas, Nevada. Mandatory Credit: Ed Mulholland/Matchroom.
07
May
by Joseph Santoliquito

When he finally arrived in the ring Saturday night at the T-Mobile Arena in Las Vegas, Montana Love just got by Gabriel Valenzuela in a 12-round junior welterweight bout to head the Dmitry Bivol-Canelo Alvarez WBA light heavyweight title undercard.

The result was received with boos from the crowd as Love went to a corner and raised himself up on the ropes.

Valenzuela (25-3-1, 15 KOs) was the aggressor in the latter rounds, countering and landing rights on the retreating Love.

At the outset, Love had Valenzuela backing up in the first round. He had popped Valenzuela three times with straight lefts. With 22 seconds left in the first, Love knocked Valenzuela down with a check right hook, as confirmed by referee Tony Weeks.

It was a flash knockdown, from which Valenzuela bounced right back when he knocked Love down with 2:35 left in the second with a check left hook on the top of his head. Love was in far more trouble than Valenzuela was a round earlier.

Love was able to survive the round and found his legs by the end of the round.

By the third, Love fell back into a boxing rhythm. In the fourth, Love found the range with his jab, and between the two fighters, it was the only punch landing. A bruise had formed under Valenzuela’s right eye.

Both fighters missed terribly in the fifth, although Love was slightly more effective.

With 2:07 left in the seventh, Love connected with a left off the top of Valenzuela’s head. Love had outlanded Valenzuela to that point, 55-32. Love nailed Valenzuela with a straight left in the face in the closing seconds of the seventh. Valenzuela got back into the fight in the eighth, landing a significant left hook.

With 2:09 left in the ninth, Valenzuela caught Love with a straight right. Valenzuela was backing Love up and the sway of the fight was swinging in the direction of the 5-foot-10 Mexican.

As the fight entered the championship rounds, the fight was very up in the air. Valenzuela slammed Love a few times with left hooks, and he caught of piece of Love with a right uppercut. 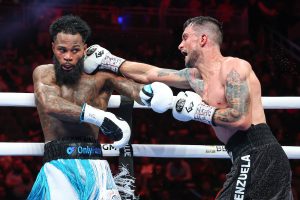 With 2:42 left in the 12th, Valenzuela connected with a right uppercut. But Love landed a straight left to the body. There were roughly 70 seconds remaining when some boos began descending on the fighters. Valenzuela went after Love in the last minute, landing a couple rights, and then a counter right as the final bell rang.

Joselito Velazquez stopped Jose Soto in six. In a scheduled 10-round flyweight fight, Joselito Velazquez (15-0-1, 10 KOs) knocked out Jose Soto (15-2, 6 KOs) at 1:06 of the sixth round. A left-hook counter dropped Soto and it was enough for referee Michael Ortega to wave it over.

In a scheduled eight-round super middleweight bout, Aaron Silva (10-0, 7 KOs) stopped Alexis Espino (9-1-1, 6 KOs) at 1:17 of the fourth round. Espino looked competitive for the first three rounds before Silva caught him with a combination that sent him into the ropes in the fourth.