On this day: Canelo Alvarez wrecks Amir Khan with a single right hand 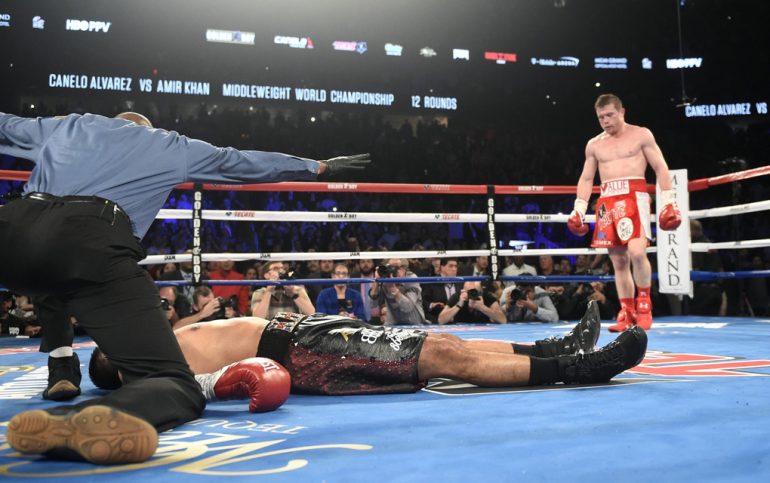 Photo by Naoki Fukuda
07
May
by The Ring

When the fight was announced, few could believe it.

On May 7, 2016, Canelo Alvarez retained the Ring and WBC middleweight titles courtesy of a spectacular one-punch sixth-round knockout of British star Amir Khan at the T-Mobile Arena in Las Vegas. The official time was 2:37.

Canelo had won the middleweight titles in his previous bout with Miguel Cotto (UD 12). The Mexican star was operating at a 155-pound catchweight, but he was still far bigger than Khan, who had only moved up to the welterweight division two years earlier.

Talented and blindingly fast, Khan boxed very well early and won rounds. However, warning signs began to appear in the fourth and fifth when moderate Canelo punches had a noticeable effect.

In Round 6, the champion released a savage right to the jaw and Khan held his feet to counter with a left hook. Canelo got there first and knocked the Englishman out cold.

“He is a fast fighter,” Canelo said of Khan afterwards. “I knew things would be complicated in the beginning but I knew they would come to my favor as the fight went on. People have known me only for my power. I have many more qualities in the ring and I showed that. I think people saw more of me tonight.

Despite Khan being a massive underdog, the name recognition of both fighters made it a very big event.