Canelo Alvarez starts his next climb atop the light heavyweight division vs. Dmitry Bivol 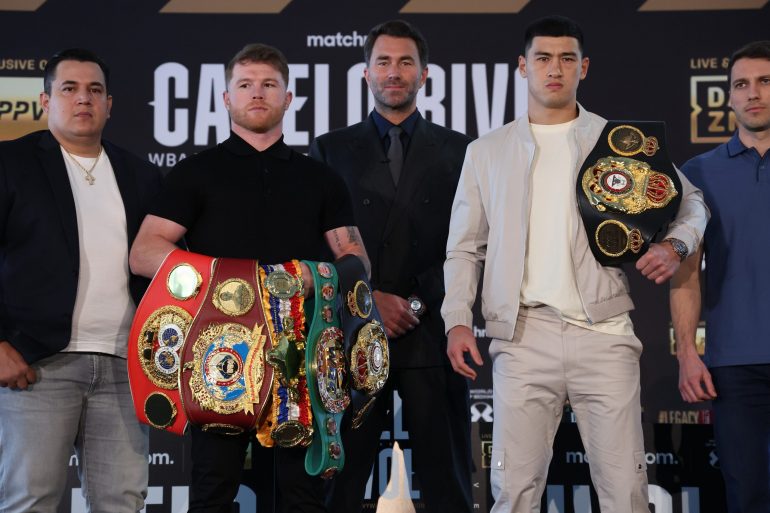 Canelo Alvarez brought his many world titles with him to the first face-off with Dmitry Bivol at the Sheraton Hotel in San Diego in March. Photo by Ed Mulholland/Matchroom
04
May
by Joseph Santoliquito

Canelo Alvarez will need to look hard. Real hard. Underneath throw rugs, in darkened closets, and even on the many boxing websites and boxing social media that don’t know what they’re talking about.

No one in boxing doubts Alvarez’s superiority.

He’s The Ring’s pound-for-pound No. 1 fighter in the world, as well as the BWAA’s and other respected boxing media outlets.

It’s fact that once Alvarez sets his mind to something in boxing—it happens. He set out to become the undisputed super middleweight world champion and buzzed through everyone he had to in accomplishing that historic feat. He already beat Sergey Kovalev for the WBO light heavyweight belt in their title bout in 2019.

If that’s his goal?

“I like the idea to be undisputed in two weight classes,” Canelo said last week during a conference call. “I feel in my prime. I feel strong. I feel confident that I can beat anybody.”

Canelo will have a great opportunity to do that if things align properly. First, Alvarez needs to beat the 31-year-old Bivol, rated No. 2 at light heavyweight by The Ring, and then get by Gennadiy Golovkin again in their third fight in September, which will be at 168 pounds. In a perfect boxing world, and that’s been the path Alvarez has walked the last two years, he would face the winner of the June 18 fight between IBF/WBC world light heavyweight titlist Artur Beterbiev and WBO beltholder Joe Smith Jr., which will take place at the Hulu Theater at Madison Square Garden.

Alvarez still knows he has Bivol in front of him. Bivol is 6-feet tall, with a 72-inch reach, in comparison to the 5-foot-8 Alvarez, who carries a 70½-inch wingspan. Bivol, however, has not stopped an opponent in his last six fights, dating back to 2018 when stopped Sullivan Barrera in 12. Alvarez, on the other hand, has stopped four of his last five opponents.

When asked what he expects from Bivol in terms of power, Canelo replied, “I don’t know. I’m going to feel that on May 7. I’m going to be very careful, like I am always. I’m 100-percent confident (in my chin). He’s a very difficult fighter. He can use distance in and out, but I have the experience and the skills to get inside and do my best. I love boxing, it’s why this kind of fight motivates. This is what I love and it’s part of my life. I train every day no matter what.

Alvarez, whose fight with Bivol will be promoted by Matchroom Boxing’s Eddie Hearn, stressed that patience will be the key against Bivol.

“I believe in my skills,” Bivol told The Ring’s Anson Wainwright in a recent interview. “I have beaten everybody that I have fought in my career, I believe that I can beat Canelo as well. Every boxer has their strengths and their weaknesses. Nobody is perfect. My goal is to focus on my strengths and use them to my advantage.

“I know that I have to be ready for this fight, 100 percent. If I am well prepared, I will win this fight.”