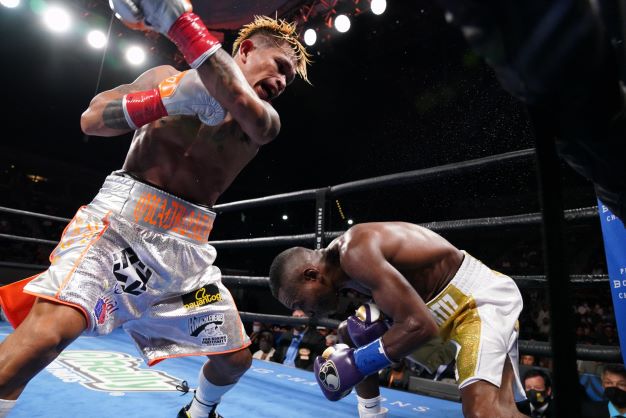 John Riel Casimero has been stripped of the WBO bantamweight title, with Paul Butler being elevated from interim champion to full championship status. Casimero will instead be installed as no. 1 contender, reversing roles with the Englishman and becoming the next likely mandatory challenger.

The decision came down early Wednesday morning, with the Puerto Rico-based World Boxing Organization voting unanimously to remove Casimero as champion after failing twice to meet Butler in a mandatory defense.

Casimero (31-4, 21 knockouts) of Ormoc City, Philippines had not made a mandatory defense of the title since winning it by knocking out Zolani Tete in November of 2019.

The decision was met with outrage from Casimero’s manager, Egis Klimas.

“This is insane and completely BS, someone here has to put dirty hands on this. First time I am ever seeing fighter being stripped because of using sauna. What’s next???,” tweeted Klimas, who also represents Vasiliy Lomachenko.

“But let me dig little deeper into this, maybe we will find out something fishy or stinky to this story.”

The fight had originally been scheduled for last December in Dubai, but was called off after Casimero failed to make it to the weigh-in, citing viral gastritis. The fight was rescheduled for last month in Butler’s hometown of Liverpool, England, but Casimero was denied permission to fight by the British Boxing Board of Control after violating their safety guidelines, which prohibit the use of saunas to cut weight.

Instead, Butler fought former Casimero conqueror Jonas Sultan on April 22 as a late replacement foe, winning a unanimous decision and the interim title.

Casimero’s team argued that the BBBofC rule prohibiting sauna use is not publicly available knowledge, and that the practice of using saunas is common practice in the sport. They said he had used a sauna “without incident” to cut weight prior to his only other bout in the United Kingdom, his 2016 knockout win over Charlie Edwards.

The WBO cited its earlier ruling, that Casimero would be stripped of the title if he was unavailable to participate in the mandatory defense “for whatever reason,” in its final decision.

Butler (34-2, 15 KOs) is now a two-time bantamweight titleholder. He briefly held the IBF title in 2014 after defeating Stuart Hall by split decision before dropping it to move down to junior bantamweight.