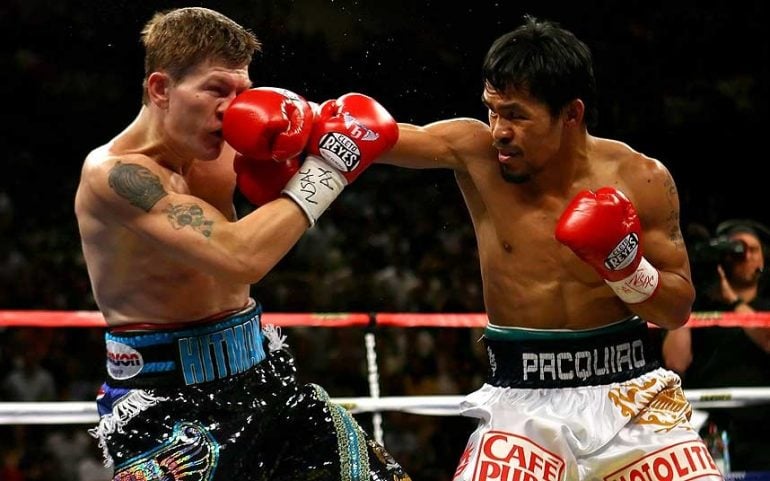 Photo by Action Images
02
May
by The Ring

This was arguably Pac-Man at his most destructive.

On May 2, 2009, Manny Pacquiao claimed The Ring junior welterweight championship courtesy of a devastating second-round knockout of British star Ricky Hatton at the MGM Grand in Las Vegas. The official time was 2:59.

Pacquiao was red-hot from the opening bell. The Filipino destroyer’s long power punches crashed home in the opening minute and Hatton eventually went down from a superb right hook counter. The Manchester man rose bravely, but another blistering combination of power shots dumped him in his own corner at the end of the round.

With Pacquiao causing this much damage early, the writing was well and truly on the wall – in blood. Hatton actually performed better in Round 2, and even managed to put the rampaging challenger back on his heels with a sharp right hand. However, Pacquiao responded with more two-fisted bursts and the Englishman had no answers.

A split-second after the clapper sounded to indicate that 10 seconds remained in the round, Pacquiao dipped to his left and released a full-force left hand to the jaw. Hatton was out upon impact and crashed to the canvas in a heap. Referee Kenny Bayless saw no need to complete the count, waved the bout off and called for medical attention. Several anxious minutes passed before Hatton regained his senses.

This was the only 140-pound championship bout Pacquiao would take part in, so he’s rarely mentioned among the pantheon of greats who made a name for themselves in this division. However, on this night he looked absolutely devastating as a junior welterweight. Sharp, accurate, powerful, and blindingly fast of hand and foot, this was Manny Pacquiao at his very best.