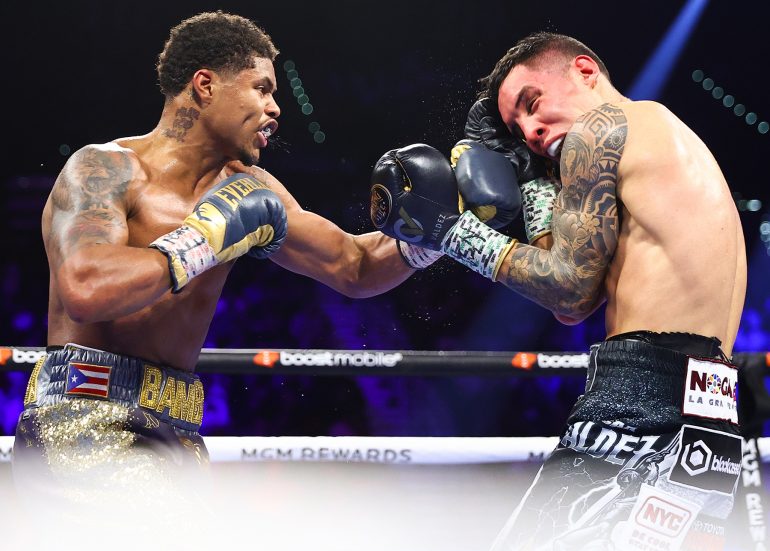 LAS VEGAS – Shakur Stevenson came, saw and conquered Saturday night. Not only did he defeat Oscar Valdez to become a unified world titleholder, he made a claim to be included among the best fighters in the sport today.

Stevenson dropped Valdez once en route to a one-sided decision victory before a boisterous crowd of 10,102 at the MGM Grand Garden Arena.

The fight created buzz amongst boxing fans from the day it was announced. Both are promoted by Top Rank and entered Saturday’s fight unbeaten, but Stevenson was the betting favorite. He closed as an 8-1 favorite at the MGM Grand Sportsbook.

From the opening bell, Stevenson worked behind a consistent jab, utilizing his quickness to throw and land a straight or left cross to the head of Valdez during the first couple of rounds.

Midway through the second round, Valdez began focusing his attack to the body, connecting with left hooks to the body of Stevenson. Valdez did find success throwing and landing a lead right hand to the head that Stevenson took well. Valdez continued to attempt to get on the inside of Stevenson’s guard. He would occasionally lunge forward in hopes of catching Stevenson flush, which he did at times. 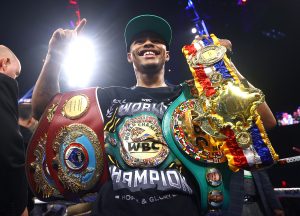 Undeterred, Stevenson continued to outland Valdez, mixing his attack that kept Valdez at bay. After the fifth round, Valdez showed the effect of Stevenson’s accurate punches as there was bruising on his face.

Stevenson scored a knockdown in the sixth round. Stevenson landed a punch that was partially blocked, prompting Valdez to counter with a left hook that missed. Stevenson followed up by landing a right uppercut that was blocked, but Valdez wound up on the canvas. Referee Kenny Bayless administered a standing eight-count to Valdez, who looked confused and did not understand why a standing eight-count was administered by Bayless.

With stablemate and RingMagazine super middleweight champion Canelo Alvarez at ringside, Valdez started to let go of his right hand in the eighth round. Once he closed the distance between the two, Valdez unleashed right crosses to the head. A series of right hands at the beginning of the ninth round caught Stevenson’s attention. Valdez continued to try to lay traps in order for him to close the distance. The tactic worked at times, but Stevenson would swing momentum his way by landing straight or counter left hands to the head.

As the fight progressed into the championship rounds, Stevenson teed off on Valdez in the 11th round, landing at will as Valdez looked tired. Undaunted, Valdez let his hands go in the final round, but it was too little, too late as Stevenson looked up at the big screen inside the arena to see how much time was left. As Valdez pressed, Stevenson took a victory lap around the ring, knowing he did more than enough to come victorious.

As he had the belts draped over him, Stevenson got down on one knee to propose to his girlfriend Young Lyric, who said yes.

“I want to collect all the belts at 130 (pounds) and become undisputed,” said Stevenson after the fight. “I deserve to be a superstar, so that’s what I gotta do.

“This victory means everything. I told ya’ll what I was going to do. I said I’m gonna beat Valdez, Canelo, and Eddy Reynoso, so that was the game plan, beat the whole team and I feel good about it. Much respect to them, but that was my game plan.”