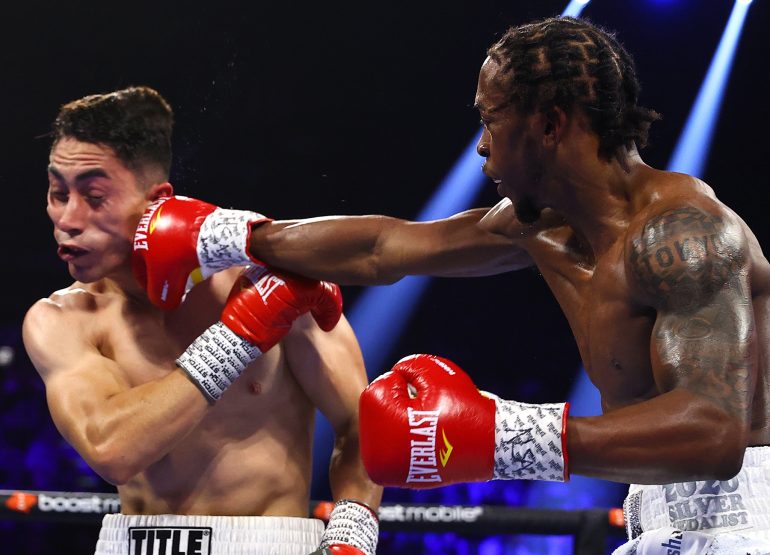 LAS VEGAS – Lightweight prospect Keyshawn Davis battered Esteban Sanchez before the fight was stopped in the sixth round Saturday night.

Sanchez, a taller and awkward boxer, gave Davis problems early on as he focused his attack to the body and was crafty in not allowing Davis to connect anything solid in the opening rounds.

Sanchez attempted to swing momentum his way by letting his hands go in the fourth round, but Davis connected with a variety of punches, including straight right hands and counter left hooks to the head.

By round 5, it was all Davis as he battered Sanchez. Midway through the round, Davis pinned Sanchez in a corner, where he unleashed a barrage of punches that stunned Sanchez. Towards the end of the round, Davis’ punches snapped Sanchez’s head back several times. Sanchez looked as if he was going to get knocked down, but to his credit, he remained on his feet.

Davis went for broke during the following round, continuing to punish Sanchez with several combinations to the head and body. Moments later, Davis pinned Sanchez the ropes, landing at will until referee Robert Hoyle stepped in and stopped the bout at 2:44.

The 23-year-old is glad he is receiving these challenges.

“He’s a great fighter,” said Davis of Sanchez. “I figured out that in the opening round. I had to pull tricks out of my bag. My coaches told me to go to the body. This fight challenged me. I felt it was a great performance and I got the stoppage.

“I like getting these challenges. I’m open to the matchmakers at Top Rank in putting these opponents in front of me.”

Sanchez, who is originally from Ensenada, Mexico and now resides in Conroe, Texas, drops to 18-2 (8 KOs).