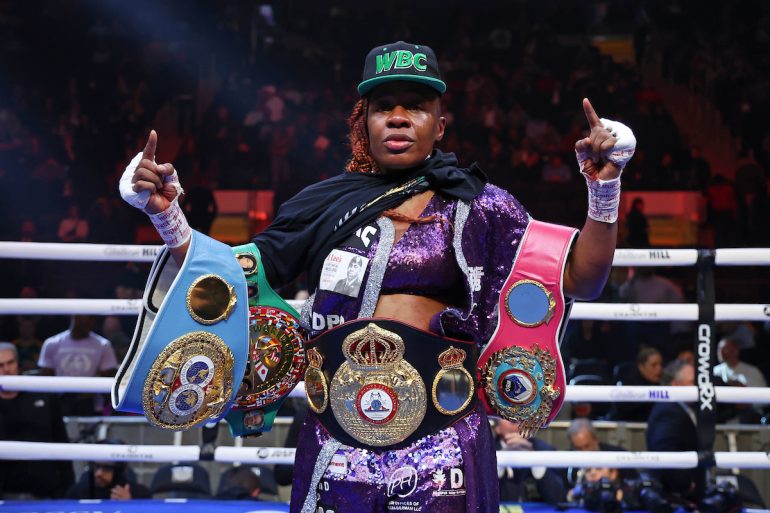 NEW YORK — There is nothing refined about Franchon Crews-Dezurn. She plods forward and proceeds to throw punches from every imaginable angle there is.

And she’s awfully effective at it. 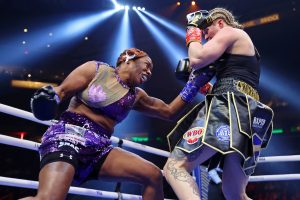 Crews-Dezurn won easily on the scorecards, getting 99-91 verdicts from judges Kevin Morgan and Waleska Roldan, while judge Eric Marlinski saw a little closer, 97-93.

In the first round, Crews-Dezurn tried brawling but it was evident Cederroos was the sharper puncher and more skilled fighter. While Crews-Dezurn was swinging wildly hoping to connect, Cederroos calmly pecked away, using her jab.

In the second, Crews-Dezurn’s wild, winging shots took hold. She landed a few and had Cederroos backing up.

Crews-Dezurn was looking to use the momentum she had built in the second to carry over into the third. Again, she came out winging and moving forward, testing Cederroos, whose nose began to bleed.

By the fourth round, Cederroos’ face was a red mess. Her nose was a bloody faucet. In between the fourth and fifth rounds, referee Sparkle Lee and the ringside judges took a close look at Cederroos.

By the seventh, Cederroos appeared to be closing the gap and had Crews-Dezurn fighting with her mouth agape, gasping for air. It didn’t stop Crews-Dezurn from pushing Cederroos around and clinching to change Cederroos’ rhythm.

Cederroos may have had her best round in the eighth, pushing a tiring Crews-Dezurn back.

Cederroos chose to fight the 10th like Crews-Dezurn, swinging wildly and connecting on a few. But Crews-Dezurn may be part iron, because she took the shots well and kept coming. As the final bell sounds, Crews-Dezurn had her head buried in Cederroos punching at anything she could.

The southpaw Yafai had Cartagena in a ton of trouble early. He attacked and broke down Cartagena from a variety of angles, working the body with his right and slamming Cartagena with left uppercuts.

In the second, Yafai was once again dictating the pace and was the aggressor. He used his superior skillset, attacking Cartagena with rights to the body, and straight lefts when Cartagena lowered his guard.

When Cartagena returned to his corner after the second, Dock waved the fight over. Cartagena did not vehemently protest the call. He knew.

This was supposed to be a test for Williams. Some test. Williams jumped all over Booker with a barrage of punches and had Booker in trouble immediately. Referee Charlie Fitch called a knockdown when Booker went stumbling back into the ropes off a flurry of Williams’ punches.

Finally, in what seemed like an eternity, Fitch waved it over at 2:25 of the first.

Reshat Mati plunges a left into Joe Eli Hernandez during their bout at MSG (Ed Mulholland/Matchroom).