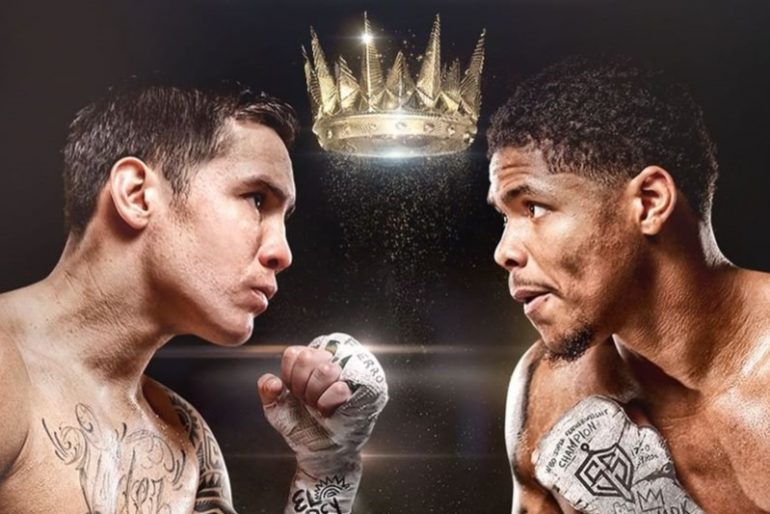 Incredibly, the stakes just got even higher in the Oscar Valdez-Shakur Stevenson unification matchup.

The pair face off at the MGM Grand in Las Vegas this Saturday in one of the most eagerly anticipated 130-pound fights in recent memory. Both are unbeaten. Both are world titleholders. Both are highly skilled. However, only one will emerge as the new Ring Magazine junior lightweight champion.

Valdez (30-0, 23 knockouts) is the reigning WBC titleholder. He won that belt in February 2021 by scoring a devastating 10th-round knockout over long-reigning champion Miguel Berchelt. The 31-year-old Mexican star has defended successfully once, outpointing tough Brazilian Robson Conceicao in September. However, less than two weeks prior to the Conceicao bout, Valdez tested positive for the VADA banned substance phentermine. The fight went ahead as scheduled but Valdez lost his No. 1 spot in The Ring ratings as per our rules.

Stevenson, The Ring’s new No. 1 at junior lightweight, wrenched the WBO title from fellow lefty Jamel Herring last October. The 24-year-old Newark, New Jersey native was razor-sharp from the opening bell and turned in the finest showing of his career to date. Stevenson (17-0, 9 KOs) was so dominant that The Ring officially named his 10th-round stoppage victory “Performance of the Year” for 2021.

“Shakur Stevenson and Oscar Valdez are the two best 130-pound fighters in the world today, according to the fans, media and boxing insiders,” said The Ring’s editor-in-chief, Doug Fischer. “Both former amateur stars are undefeated in the professional ranks and both earned their junior lightweight titles by stopping formidable veterans. Their matchup presents a clash of contrasting styles and identical iron wills that will command the attention and respect of the boxing world, and it is certainly worthy of The Ring’s recognition as a battle for the true junior lightweight championship.”

Who was the last man to hold The Ring title in this division? None other than the legendary Manny Pacquiao, who won the vacant 130-pound championship by narrowly outpointing his great rival Juan Manuel Marquez in their second fight. That bout was contested in March 2008 and Pacquiao relinquished the title later that year. The championship has been vacant ever since.

The winner of Valdez-Stevenson will join a lineage of other greats who won The Ring championship at 130 pounds including Wilfredo Gomez, Brian Mitchell, Samuel Serrano and Flash Ellorde.

Valdez-Stevenson, plus undercard action, will air live on ESPN in the U.S. and Sky Sports in the U.K. The event is being promoted by Top Rank.