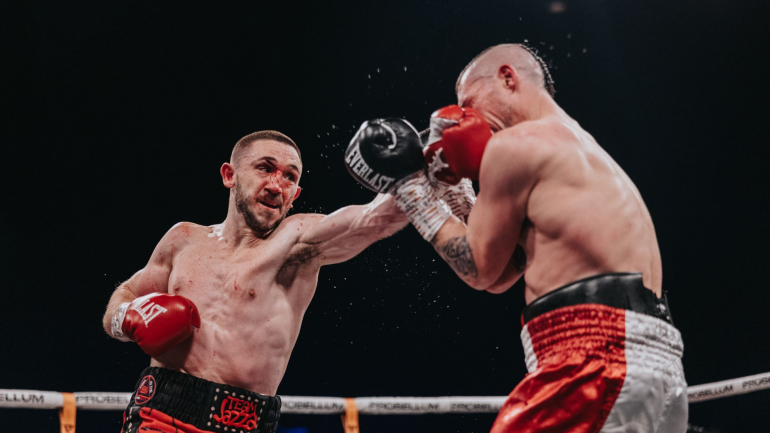 The end came at 2:39, as Howard Foster intervened amid an all-out offensive blitz from the Mexican journeyman to call off the junior welterweight bout, handing Maxwell his first pro defeat.

Meneses (16-5, 9 knockouts) of Mexico City struck first in round four, taking advantage of Maxwell’s lack of head movement to drop him with a right hand. Maxwell decided to fight fire with fire, swinging wildly to try and keep Meneses off of him. The respite was only brief, as Meneses came back in the fifth round to wobble Maxwell with a counter left hook that had Maxwell struggling to hold on amid a relentless, two-fisted attack.

The right hand once again put Maxwell (16-1, 11 KOs) on the canvas in the ninth, as the shorter armed local fighter backed straight up, leading to the stoppage later in the round.

The win is the fourth straight for the 32-year-old Meneses, who had previously lost to five opponents who would not be immediately recognizable to boxing fans.

The bout was among the featured bouts on a card promoted by Probellum, and is headlined by the WBO interim bantamweight title fight between Paul Butler and Jonas Sultan.

Fortunately for Liverpool fans, there were a number of other local favorites on the card with more favorable outcomes.

James Dickens rebounded from his title opportunity loss last year to Kid Galahad with a fifth round knockout of Andoni Gago in a featherweight bout scheduled for ten rounds.

Dickens (31-4, 12 KOs), better known as Jazza, dropped Gago (25-5-4, 7 KOs) of Bilbao, Spain with a left hand in the third round, before finishing matters with a counter left uppercut in the fifth.

“I need a world title next. It can be Leigh Wood or Josh Warrington, but I would prefer Leigh Wood, who I have beaten before,” said Dickens.

“It is hard to see another man with your world title.”

Dickens, a native of Liverpool is hoping for a third opportunity at a world title after losing to Guillermo Rigondeaux by second stoppage in 2016 for the WBA junior featherweight title, and being stopped in eleven against Galahad last August.

Light heavyweight fringe contender Rocky Fielding earned his third straight victory, stopping Finnish journeyman Timo Laine (30-18, 12 KOs) in round 3 with an unanswered barrage of punches. The fight was a homecoming for the 34-year-old Fielding (30-2, 17 KOs), who was born in Liverpool but hadn’t fought there since his 2019 win over Abdallah Paziwapazi.

Fielding is best known for his 2018 fight against Saul “Canelo” Alvarez, who stopped him in three rounds at Madison Square Garden in New York City to lift a secondary title that Fielding held at super middleweight.