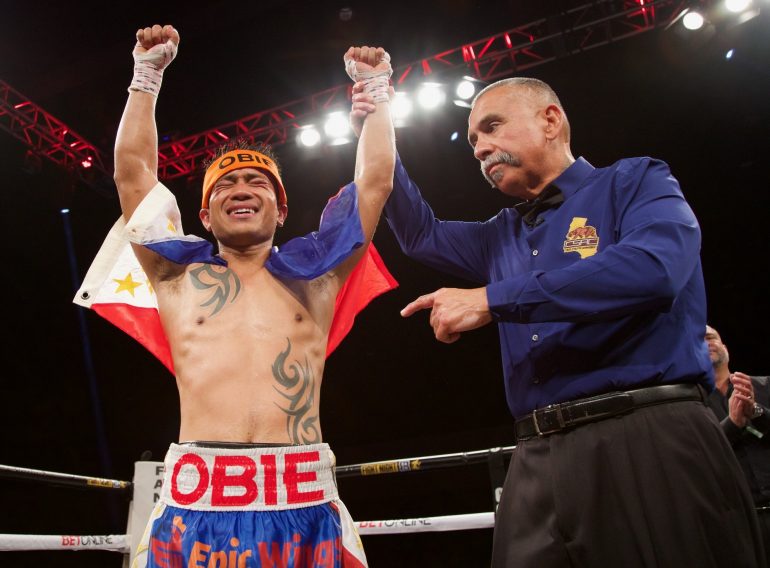 Lightweights Joel Diaz Jr. and Mercito Gesta were in a battle for their relevance Thursday night on the debut of the Golden Boy Fight Night series on DAZN, from Fantasy Springs Resort Casino in Indio, California.

Gesta, 34, last fought in November 2019, though he lost unanimous decision lightweight challenges to then-WBA titlist Jorge Linares in January 2018 and then-IBF Miguel Vazquez in December 2012. Diaz, 30, was 2-3 over his last five fights before facing Gesta.

Gesta (33-3-3, 17 knockouts) won to continue forward, taking a unanimous 10-round decision, getting a 96-92 nod on the scorecards of Carla Caiz and Damian Walton and 95-93 from Fernando Villarreal.

“It was so emotional,” said Gesta, who won for the first time since July 2018. “It was mixed emotion for me, and keep saying this over and over, and my wife is pregnant and we’ve been trying a long time.”

The southpaw Gesta backed up Diaz (26-3, 22 KOs) in the first with a straight left to the face, forcing Diaz into the ropes. But Gesta couldn’t sustain that attack. With 1:08 left in the first, Gesta dropped Diaz the first time with a right, and the second time with :40 left with a counter left.

“I give it up to Joel Diaz, he’s a tough opponent, I gave it my all,” Gesta said. “All of the answer is God. If you find that connection, and I’m not shy to say, if you have God in you and you have faith, good things will happen. I give it up to my promoter (Golden Boy) and I want to keep going. Whatever comes my way, I’ll be ready.”

For someone who was out of the ring for three years, Gesta looked really good.

Diaz came out stronger in the second, trying to find his legs.

After commanding the opening minutes of the third, Gesta started popping looping lefts to connect Diaz and push him back with lefts.

In the fifth, the fighters banged heads, causing referee Ray Corona to momentarily stop the action and declare an accidental head butt.

Through five rounds, Diaz and Gesta were almost exact in their punch output. Diaz landed 99/317 and Gesta an almost-exact 99/318.

By the sixth, Diaz had his legs underneath him. He was the aggressor, pinning Gesta against the ropes several times. Gesta appeared to be slowing down, though he landed a right uppercut.

With 2:01 left in the seventh, Gesta slammed Diaz with a straight left to the face. Inside of a minute, Gesta once again connected on a straight left, but it’s a punch that didn’t have much on it.

Gesta closed well, landing a right uppercut, with a little help by pulling down Diaz’s head.

In the co-feature, lightweight Jousce Gonzalez (12-0-1, 11 KOs) knocked down Jairo Lopez (27-15, 17 KOs) twice in the third round of a scheduled eight-rounder, dominating the very tough Lopez. In the fifth, Lopez opened a gaping cut on Gonzalez’s right eye. Gonzalez increased the heat in the sixth, when referee Eddie Hernandez stopped it at 2:26.

“I give my performance a six out of ten,” Gonzalez said. “This is my first fight back and I know I can do better. He is a very resilient fighter, but I knew I was landing my shots and hurting him. I knew he was taking some punishment so I wasn’t surprised when the referee waved the fight off. I am just happy to be back in the ring and want to aim to fight big names in the division.”

Junior featherweight Manuel Flores (12-0, 9 KOs) survived a cut left eye to down Victor Ruiz (23-13, 16 KOs) three times in the third for 2:21 stoppage in the scheduled eight-rounder.

“First of all I want to thank god and Golden Boy for the opportunity to fight tonight,” Salvatierra said. “We have had a great training camp, preparing since January for anything that could pop up. We trained to go the distance, I was expecting more from my opponent hoping that his experience would bring more to the table.

“But unfortunately he sustained an injury and things happen for a reason. I want to be active for the rest of the year and hopefully fight for a regional title soon.”

Junior lightweight Jorge Chavez (2-0, 2 KO) opened the night by stopping Jonathan Tejeda (0-2) with a body shot at 1:04 of the second round of a scheduled four-rounder.

“I loved being able to fight at Fantasy Springs, all my friends and family were able to come see me in a more intimate venue,” Chavez said. “I am happy I got the victory, but every fight is a learning experience.  Every fight we will continue to grow, learn, and just get better and better.”