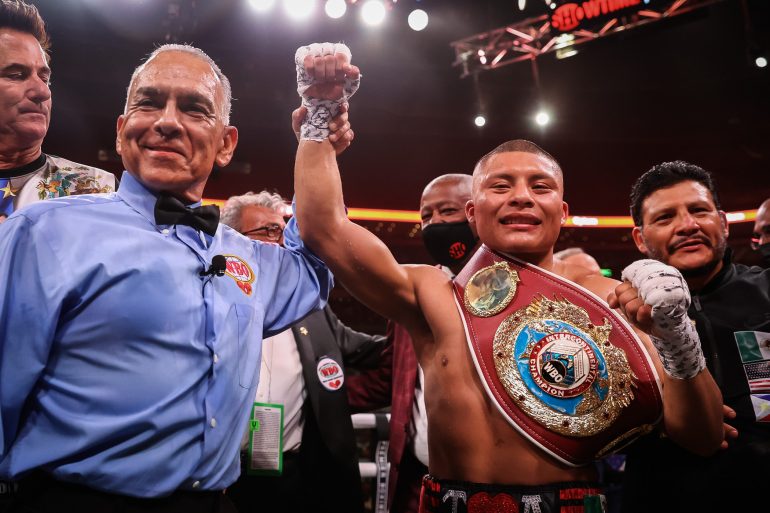 ARLINGTON, TX — The only thing Isaac “Pit Bull” Cruz had to battle the last two days was his weight.

The lightweight title contender came in 136½ for the 135-pound bout against fading 40-year-old Yuriorkis Gamboa on the undercard of the Errol Spence Jr.-Yordenis Ugas co-feature at AT&T Stadium in Arlington, Texas, on Showtime Pay-Per-View on a Premier Boxing Champions event.

Cruz came back and made the weight, 134.8, then pounded Gamboa, stopping him at 1:32 of the fifth round.

“I’m here to defeat and dethrone anyone that gets in my way while putting on a show for the fans,” Cruz said. “I wanted to send a clear message to the division that I’m here to be a world champion no matter what.

“Mexico, just wait until we arrive. We have something special planned for you when we come back to celebrate.”

Lightweight Jose Valenzuela (12-0, 8 KOs) made fast work of Francisco Vargas (27-4-2, 19 KOs), stopping him at 1:25 of the first round of a scheduled 10-rounder. Valenzuela took home the WBC Continental Americas title thanks to a devastating left hook that left Vargas flat on the canvas. Referee Mark Calo-oy never bothered to count, immediately waving it over.

“I feel great,” Valenzuela said. “I worked very hard for this. I was expecting him to come forward and throw a lot of punches and be more aggressive. But I stayed patient, used my jab and went to the body. I learned a lot from David Benavidez. I get a chance to look behind the scenes and see what he does. He just tells me to be patient, take my time with it and that’s what I did.

“I just need to keep finding good fights, guys like Vargas. Whatever my team has planned for me, I’m willing to do it. But I’d like to fight some of these top guys and I want to get back in the ring as soon as possible.

“He came in with a jab, I took a little step back, and I had already hit him with a few body shots, so when I did a little dip I think he thought I was going to the body. I just swooped him upstairs.”

“I just train hard and come in and give it 110% effort every single day,” Crowley said. “I’ve had so much adversity throughout my life. This week, I had a rotten tooth in my mouth that was falling out. I can’t feel my face right now. I had a chest infection. I’m still here. I had no test scale, I came in two-and-a-half pounds light. It’s just one adversity after another but every time I show up and get the job done no matter what.

“It’s been the story of my life. You saw what happened in my last fight. I get put to the test, and the true Cody Crowley comes out. I want to fight the absolute best. You want to see the real Cody Crowley?”