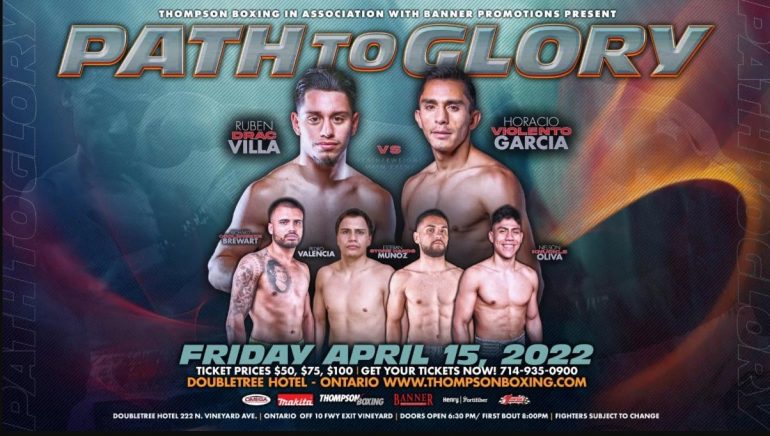 ONTARIO, Calif. – Featherweight Ruben Villa broke former fringe contender Horacio Garcia down from the opening bell, stopping him in the ninth round before a partisan crowd at the Doubletree Hotel.

Villa, who resides in Salinas, California, improves to 19-1 (6 knockouts).

Friday night marked an impressive performance by the southpaw Villa, who was fighting for the first time since his grandmother Sylvia Villa passed away. From the opening bell, Villa was extremely sharp, landing the more telling punches.

As if dealing with Villa’s quickness and lateral movement wasn’t difficult enough, Garcia had to deal with a cut over his left eye that opened during an exchange in the opening round. It was not clear if an accidental clash of heads or a punch opened the cut.

As the bout progressed, Villa displayed his pedigree, breaking Garcia down during each round. Villa landed two and three-punch combinations that snapped Garcia’s head back. Villa also mixed an array of punches to the body, taking steam out of Garcia’s punches.

There was a lull in the action after the eighth round, as they needed to change Garcia’s right glove since it ripped during the previous round. It did not matter, as Villa continued to aggressively attack Garcia. About a minute into the ninth round, Villa landed a combination upstairs, following up with a left hand to the head. Referee Raul Caiz Jr. saw enough and stopped the fight at 1:12.

Villa had not fought since October 2020, when he was knocked down twice en route to a unanimous decision loss to Emanuel Navarrete. Both Navarrete and Villa were fighting for the vacant WBO featherweight title.

The 31-year-old Garcia returned to action on February 18 after a layoff of nearly three-and-a-half years, defeating Isaac Zarate by majority decision.

Garcia, who resides in Guadalajara, Mexico, dropped to 35-6-1 (25 KOs), suffering the first stoppage loss of his career.

In the co-feature bout, middleweight Richard Brewart, of nearby Rancho Cucamonga, defeated Antonio Duarte by decision over six one-sided rounds. All three judges scored the bout 60-54 in favor of Brewart, who improves to 11-0 (4 KOs).

Brewart was content to outbox Duarte throughout the fight, varying his attack by initiating exchanges or countering anytime Duarte launched an offense.

Duarte, who resides in Tijuana, Mexico, drops to 2-3.

In a clash of unbeaten lightweights, Pedro Valencia overcame a knockdown to defeat Edgar Palacios (3-1, 1 KO), of La Paz, Mexico. All three judges scored the bout 57-56 in favor of Valencia, who improves to 9-0 (7 KOs).

A counter left hand dropped Valencia face-first to the canvas toward the end of the opening round. Valencia beat the count but was on wobbly legs and fortunate the bell sounded to end the round. Valencia was the aggressor during the midway point, which likely won him the fight.

Welterweight Esteban Munoz (6-1, 4 KOs), of Riverside, California, won by knockout after San Antonio’s Kenny Williams (4-7-1, 2 KOs) remained on his stool after the third round. Munoz has now won his last four fights.

Middleweight Nelson Oliva, who also resides in Riverside, improved to 2-0 (2 KOs) by dropping Tijuana’s Manuel Martinez (6-6-4, 3 KOs) twice en route to a knockout win in the opening round. Martinez’s corner threw in the towel, prompting referee Raul Caiz Jr. to stop the fight at 1:42.

In the opening bout of the Thompson Boxing Promotions card, bantamweight Alejandro Barajas, of Los Angeles, was successful in his pro debut, defeating Tijuana’s Ulises Rosales (0-6) by unanimous decision. All three judges scored the bout 40-36 in favor of Barajas.