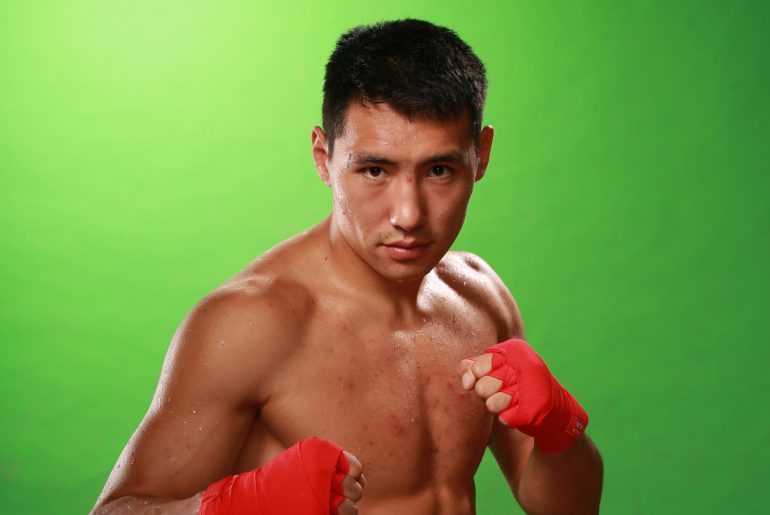 Middleweight contender Zhanibek Alimkhanuly, who is ranked No. 6 by The Ring, will square off against Danny Dignum on May 21, promoter Bob Arum confirmed to The Ring. The 12-round bout will take place at the Resorts World Las Vegas in Las Vegas, Nevada and will air live on an ESPN platform.

It has been a whirlwind last couple of months for Alimkhanuly. In December, the WBO ordered a purse bid between WBO middleweight titleholder Demetrius Andrade and Alimkhanuly, the mandatory challenger, after negotiations to finalize a fight between the two parties failed. Andrade decided he would move up to 168 pounds and challenge for the vacant WBO title.

Three days after contender Jaime Munguia stopped D’Mitrius Ballard, the WBO ordered negotiations to take place between Alimkhanuly and Munguia. Less than two weeks later, it was reported WBC middleweight titleholder Jermall Charlo offered Munguia an opportunity to fight for his world title, which Munguia accepted, but the fight fell through after an agreement between Golden Boy Promotions, Munguia’s promoter, and Premier Boxing Champions (PBC) reportedly could not be reached regarding DAZN also streaming the fight.

Showtime would have aired the Charlo-Munguia fight.

The WBO offered the opportunity to face Alimkhanuly to the next available fighter. Dignum was glad to take the offer.

Alimkhanuly (11-0, 7 knockouts), who is originally from Zhilandy, Kazakhstan and now resides in the boxing hotbed of Oxnard, California, battered former world titleholder Hassan N’Dam in his last bout on November 20 before the fight was stopped in the eighth round. Less than five months before the N’Dam fight, Alimkhanuly dropped Rob Brant once en route to a knockout win after the eighth round. He has stopped six of his last seven opponents.

The 29-year-old has been moved quickly by Top Rank, which has a history of moving fighters modestly from prospect to contender to fighting for a world title belt. Alimkhanuly is managed by Egis Klimas.

Dignum (14-0-1, 8 KOs), who resides in Bowers Gifford in the United Kingdom, was victorious in his last bout on February 11, dropping Grant Dennis three times en route to a knockout win in the sixth round. The win over Dennis comes almost a year after Dignum fought to a split-decision draw against Andrey Sirotkin.

A source told The Ring that junior lightweight prospect Karlos Balderas (12-1, 11 KOs) of Santa Maria, California will also fight on the Top Rank card. Balderas earned another knockout win on March 4, dropped Aelio Mesquita three times before ending matters in the second round.