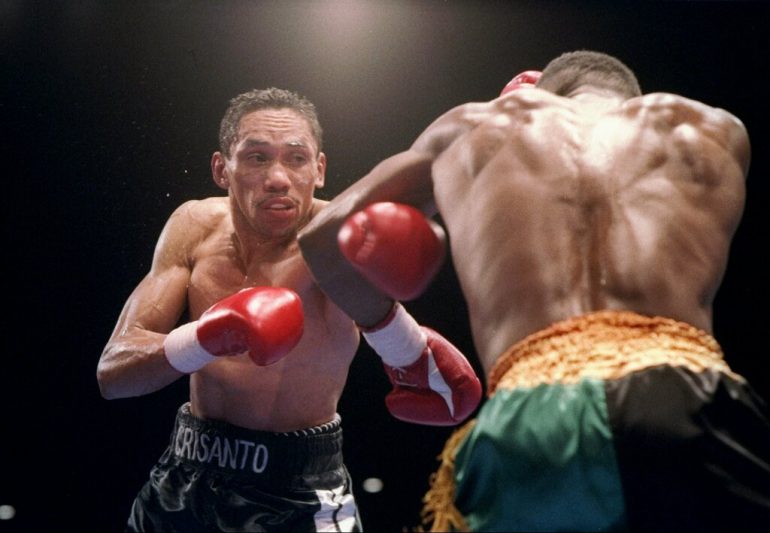 Unheralded boxer-puncher Crisanto España was a skilled and pragmatic fighter who held the WBA welterweight title in the early-mid 1990s.

España was born in the small town of La Flor, 90 kilometers southwest of Ciudad Bolivar, Venezuela, one of 14 children, on October 25, 1964.

“My years as a youngster were tough,” España told The Ring through Mauricio Gonzalez. “I worked out in the fields with my dad and grandfather. We were a very humble, poor family. We worked out in farm land, we raised corn, rice, plantains and yuccas.”

España was heavily influenced by the success of his elder brother, Ernesto, who claimed the WBA lightweight title that the legendary Roberto Duran vacated.

“I got into boxing because my brother Ernesto was a boxer since I was 8-years-old,” he explained. “It was an inspiration when Ernesto won a world title and I wanted to win world title also.”

España went on to enjoy a successful amateur career, winning three national titles. He also fought internationally, compiling a record of 64-10 before turning professional with a first-round knockout in March 1984.

However, España’s early career was blighted with inactivity in his native country, which forced him to seek solace, firstly in nearby Latin America and later further afield.

“It was tough to fight in Venezuela because professional boxing was in a very bad state,” he explained. “Through [renowned Argentine-Panamanian boxing manager] Luis Spada I went and fought in Panama. He recommended me to [Irish promoter] Barney Eastwood. I moved to Northern Ireland in 1988 and I started to fight over there.”

España acclimatized to the surroundings and got married and later had two children in his new homeland.

“It was very hard when I first got there, the language, the food, the weather,” he admitted. “I adapted quickly, and Eastwood kept me active.”

In just two-years, “Claws” enhanced his reputation racking up 16 wins, 14 inside the distance, often appearing at his home away from home: Ulster Hall, in Belfast.

In February 1991, España met battle-hardened future WBC junior middleweight titlist Luis Santana. It was his first step onto the world scene and one he passed with flying colors. España dominated the fight, boxing his way to a near shutout 12-round unanimous decision.

The rangy southpaw stayed active and the wins continued to pile up as he worked his way into the WBA mandatory position.

España, who was listed as a 5-2 underdog, challenged the supremely talented Meldrick Taylor for the WBA welterweight title as chief support to the heavyweight showdown between Lennox Lewis and Razor Ruddock at Earls Court, London, England, in October 1992.

“That day was very important to me, to fight on a huge card like that,” said, España, who dropped the defending champion in the third and bludgeoned him into defeat in the eighth round. “Meldrick Taylor was one of the best boxers of that era. It was very special to me.

“I wanted to win for my town, for my team and for Eastwood, the man who gave me a lot of support when I went to Ireland. I was happy to win a world title because I could now help my family. I’m a man of little celebrations.”

Eastwood was able to broker a deal to get his fighter a plumb spot as chief support on the undercard of the WBC/WBO super middleweight unification rematch between Chris Eubank vs. Nigel Benn at Old Trafford, the home of the world-famous soccer team, Manchester United, against Donovan Boucher in October 1994.

“That was another good experience for me,” said España, who scored a one-sided 10th round stoppage. “I was in the dressing room and went out to the fight. I was a nervous because I saw the crowd [47,000] but I was able to control myself pretty quickly and I was able to fight nice and calmly.”

Next came a fight with unknown mandatory contender Ike Quartey in Paris, France in June 1994.

“I was confident I was going to win but I don’t know what happened,” admitted España, who had his moments but was stopped by the relentless Ghanaian fighter in the 11th round. “I don’t have any excuse. I am comfortable in my own skin because I lost to a great fighter like Quartey.”

España fought just once more, nine months later, a six-round decision over Paul Wesley. He had hopes of reigniting his career stateside.

“I tried to fight in U.S. but when I went from Ireland to Las Vegas there was nobody waiting for me,” said España, who retired with a record of 31-1 (25 knockouts). “I was lucky there was an English boxer who recognized me and took me out to eat. Luckily, I had a little bit of money and was able to get a room and food and return back.

“Eastwood told me not to fight any more. I didn’t train anymore and that’s pretty much how my boxing career came to an end. It’s unfortunate.”

“I didn’t last too much time in the marriage,” he admitted. “I also have two older sons with my first wife, they live in Ireland and I have little contact with them through messenger. They were 4 and 2 years old when I left to go back to Venezuela and more than 6 years passed until I could contact my sons. They’re both adults now.”

España, now 56, has been married to Margarita for 20-years and has two daughters with her. He works as a boxing trainer and works with over 20 boxers, though things have been difficult due to the COVID-19 pandemic.

“My life is good and stable in Venezuela, now there’s not much to do,” he said. “I’m very happy and content with everything I have done in my life.”

The ex-titleholder graciously took time to speak to The Ring about the best he fought in 10 key categories.

Ike Quartey: Quartey had the best defense because I couldn’t ever catch him with an effective punch.

Taylor: Taylor and Rodolfo Aguilar were the best on their feet, moving around, but I would say Taylor had better footwork.

​Rodolfo Aguilar: It was Rodolfo Aguilar who was the smartest just because of his movements in the ring. He would make me think and whenever I would go on the offensive Aguilar would already know what I was about to do. Del Bryan confused me a number of times. He was very smart and had a lot of talent.

Quartey: Santana and Quartey. I hit them and they never fell. They were strong physically. I would say Ike Quartey.

Quartey: The one who hit the hardest was Quartey. He knocked me out.

Quartey: I hit him hard, pretty solid. He was hurt by me one of my punches once [in Round 7.]

Taylor: Taylor was a complete boxer, he was strong, hit hard and had a lot of courage.

Taylor: Meldrick Taylor was definitely the best fighter I ever faced. He was an Olympic champion; he was a good overall fighter and has a place in the history of the sport.