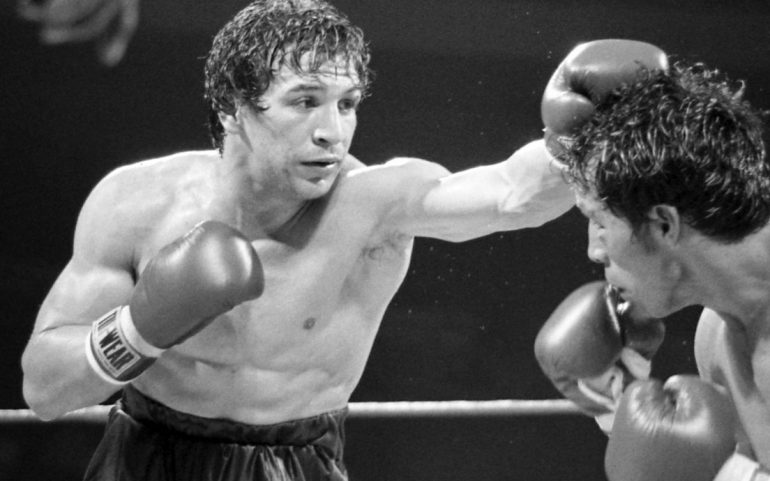 Former world lightweight champion Ray Mancini, who enjoyed a flying visit to the UK this week, was one of the most popular fighters of his generation and now he sees Canelo as the No. 1 draw in boxing.

Ohio legend Mancini was asked whether there’s a Stateside buzz for the April 23 heavyweight clash between Tyson Fury and Dillian Whyte in Wembley Stadium, but he said it’s not firing yet.

“No, to be honest with you there’s not,” Mancini said. “People talk about what Canelo’s going to be doing next more than they do about the heavyweight champ. Canelo is the No. 1 attraction, especially in the States and maybe worldwide.”

Fury, though, is not without his significant upsides. Wembley Stadium sold out quickly for the Whyte fight and Fury’s certainly created a following in the US.

“Tyson Fury’s an interesting character,” Mancini continued. “One thing boxing lacks is personality. We had Ali and then we had Tyson but even though he wasn’t a huge personality his fighting spoke for itself and it was a different personality but boxing has always had its characters. Tyson Fury is one of those guys and that’s why it’s good for the sport, he’s a great personality, brings a lot of attention and he talks as well as anyone.”

Mancini has only seen clips of Whyte on YouTube but he’s encouraged by the heavyweight landscape in the UK, with Daniel Dubois, Dereck Chisora and Joe Joyce all players.

“They say styles make fights, right?” Ray added. “I thought Joshua would be a bigger headache for Deontay Wilder than Tyson Fury because he’s a tall guy who punches straight while Wilder is a tall guy who punches wide, Fury moves well but he punches awkwardly, weird angles, and that’s effective for him, he’s successful with it and he’s a world champion and he’s obviously got Wilder’s number. Andy Ruiz beats Joshua, Andy Ruiz goes out, gets fat, they have the rematch and Anthony Joshua fights him like he’s half scared, I thought it was a boring fight, it stunk out the joint but that a fight where we say one guy did nothing, the other guy did less. So, then he [Joshua] lost to Usyk and Usyk can fight, he’s the real deal. He has a great amateur pedigree, he’s a southpaw, he’s not as big but he’s a good size for a heavyweight and he can fight. He has a high boxing IQ, and he throws those straight power shots. I admire him, and he’s been back in Ukraine defending his country and now he’s able to train for the title.”

Usyk-Joshua II could take place in late June and Mancini thinks the outcome will be the same, the Ukraine star victorious.

“Usyk beat him easy and he’ll beat him easier this time,” Mancini stated. “He went in once as the underdog, he’ll have more confidence this time and he knows how to fight. I don’t know how many southpaws Joshua fought, because it looked like he had no clue how to fight a southpaw. When you fight a southpaw, you need disciplined training. It’s got to be a disciplined fight and you’ve got to stick to the fight plan. Everything starts with the left hook, the left hand, everyone says use the right hand against a southpaw but that’s stupid as the punch has to travel twice as far. It’s the left hand when you fight a southpaw, because you come from the blindside and you’ve got to develop your left hook.”

As highly as Ray rates Usyk, that doesn’t mean that he thinks he would beat Fury.

“You have to put Fury [at No. 1 in the division] because he’s bigger, stronger, and he’s beat Deontay Wilder and Klitschko before him, but if those fought [Fury and Usyk] and people thought Fury was too big, we’ve seen it through history, when Dempsey fought Firpo and beat Jess Willard for the title, size has very little to do with it if you know how to fight. I’m not saying Usyk would beat Fury, but he’d be a problem for him, that’s for sure.”