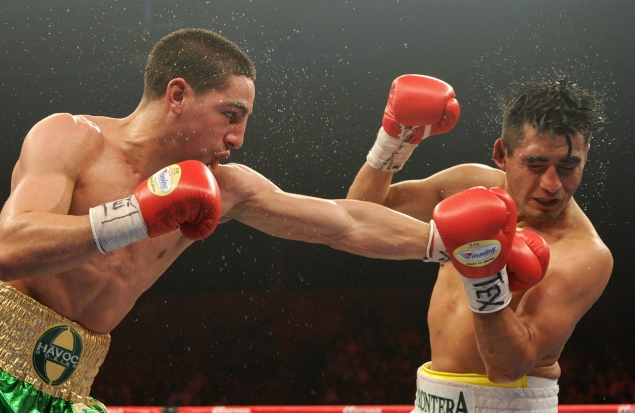 On March 24, 2012, popular Philadelphia boxer-puncher Danny Garcia scored a 12-round unanimous decision over faded Mexican icon Erik Morales to win the WBC junior welterweight title. The official scores were 118-109, 117-110 and 116-112.

The 35-year-old Morales lost the title on the scales after coming in two pounds over the limit and subsequently forfeited $50,000 of his purse to his opponent. The bout went ahead with the vacant title at stake for Garcia only, and he was favored to prevail at the Reliant Arena in Houston.

It was an entertaining bout in spots. Garcia, 24, was busier and – as a career junior welterweight – his punches carried more weight. However, Morales, a former four-division champion, certainly had his moments. His jab broke Garcia’s nose and the younger man also sustained a cut above the left eye.

The defining moment came in Round 11 when Garcia floored Morales with a powerful left hook to the chin. Badly hurt, the game Tijuana warrior found his feet, but despite trading on even terms down the stretch, this was a convincing win for Garcia.

Seven months later, they met in a rematch and Garcia prevailed via fourth-round knockout.