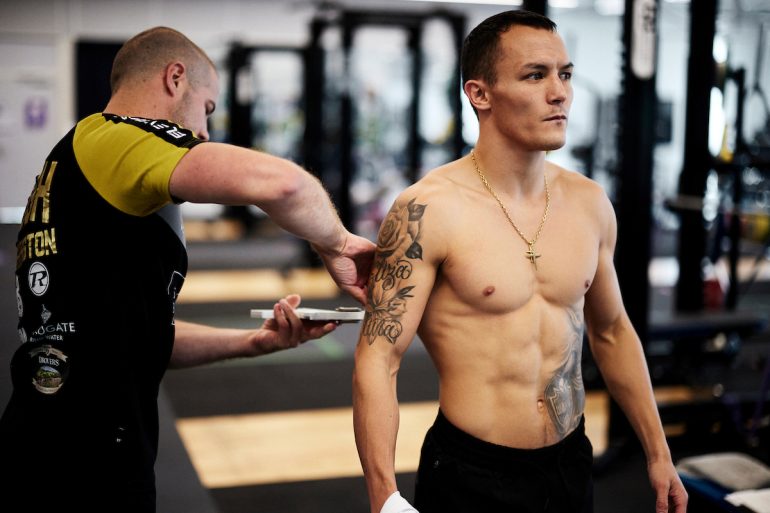 Josh Warrington had hoped to right the only wrong of his career when he came back to banish demons against Mexican Mauricio Lara last September but after two rounds, with Lara cut from a headclash, the fight was over and so was Warrington’s opportunity of taking back the featherweight title Lara had beaten him for last February.

A typically lively stadium at Headingly had the air sucked out of it and Warrington’s chance of revenge had evaporated. Warrington might have been in a bad place after the loss to Lara, but he wasn’t any further forward following the second anti-climactic fight.

“I’ll be honest, when I walked out I was depressed,” Warrington said, of leaving the venue that night. “I was proper down. I felt like I’d let everyone down who had turned up and I was really low and I didn’t realise until I switched off social media for three or four weeks and it did me a lot of good. And after that, I came to a bit of a realisation that even though it was only two rounds, I took a lot away from that. When I sat back and watched it, I thought, ‘How did I lose to this guy? How did I get beat by this guy? I can’t believe this guy knocked me out.’ On reflection… When he hit me in the first fight it was shaking me to my boots, from the first round onwards and I don’t remember him catching me at all in the second fight. It was that kind of difference, being warmed up and having the adrenaline pumping to going in there cold and thinking it’s a given.”

Lara was a huge underdog in the first fight but Warrington was ultimately stopped in nine rounds. On Saturday, at the First Direct Arena in Leeds, Warrington has another rematch but this time against a man he’s already beaten. He challenges Spain’s Kiko Martinez for the champion’s IBF featherweight title five years after a majority decision win over him at the same venue. A win over Martinez, and Warrington is right back in the mix with the big names.

“Most definitely,” the Leeds favourite agreed. “It is that, and that’s the way I’ve approached it in training, with that mindset. There’s pressure on this fight. Don’t get me wrong, there’s massive pressure on this fight, I can’t afford to be losing again. I’ve been gifted with a golden opportunity but it’s certainly different and winning on Saturday night and getting the belts back around my waist, we’re back in the driving seat and, all of a sudden, you’re looking at fights with the other champions, Leigh Wood, Leo Santa Cruz – who’s announced he’s going to be staying at featherweight – you’ve got Mark Magsayo and Navarette, all of a sudden the doors open wide, even Lara 3… They’d all be back in play but in 2019 those options were looking unlikely after I beat Selby, Frampton, Galahad and Takoucht. I was just chasing everybody, now it’s wide open again.”

There’s also a chance that Warrington is a more interesting fight for his opponents to consider now he’s been beaten. He looked so poor against Lara in the first fight that momentum from his big wins was instantly gone. Now, there could be a target on his back.

“Including Martinez himself,” Warrington explained, of fighters who might have changed their perceptions about him. “He’ll be looking at that [Lara fight] and thinking, ‘Right, I know what to do here. Catch him cold, he’ll stand and have a fight and I’ll knock him out.’ Martinez has shown he’s still got the punch power from what he did to Barry [Kid Galahad] back in November. It might not be a bad thing.”

Even though Martinez clearly possesses dynamite, given his superb knockout win to claim the title against Galahad, Warrington says his earlier career win over the visiting Spaniard does give him confidence going in to this fight.

“I’d be lying to say it wouldn’t, but at the same time you can’t rely on past results because we are both different people,” Josh continued. “Obviously he’s five years older and yes he’s coming off the knockout of his life and he pushed Zelfa Barrett close so he’s got momentum with him. That being said, since I boxed him, I boxed Dennis Ceylan, Selby, Frampton, Galahad… my stock has risen. Obviously I had the two against Lara which wasn’t great, but with all that being said, I can’t underestimate him. I beat him before, I know how to beat him, but when I started this camp I said I made hard work of it the first time round. I don’t want to have a fitness contest with him, see who can throw the most punches or just have a stand-up ding-dong, I’d rather be smarter with our approach.”

Prior to the Lara upset, Warrington was being asked about dream fights, unifications, boxing in Las Vegas. All of that came to a crashing halt and the landscape has changed. Now Leigh Wood has a world title and Nottingham’s man of the moment has Warrington in his sights.

“Yeah, rightly so,” the Leeds man continued. “Two English fighters, not a million miles away from each other, he knows I’ve got a big fanbase and they’ll come out to support me and I’m sure he’s got more followers after his big win over [Michael] Conlan and that results in big numbers as well. That’s interesting. For myself, the options are wide open but I’d certainly entertain that [Wood at Nottingham’s City Ground]. I’ve boxed at my own stadiums, Elland Road, Headingly, I’ve done Manchester so I don’t mind going to Nottingham, booting the doors off and announcing ourselves down there.”

The featherweight landscape has been unstable. Wood was the underdog against Can Xu and Michael Conlan but won both, while Martinez and Lara were second favourites against Galahad and Warrington respectively.

“I don’t know what the pandemic and Covid has done, but everyone’s getting knocked out,” Warrington joked. “I don’t know if they’re making gloves smaller than they used to! But something’s in the water at the moment but it goes to show that nothing’s ever certain in boxing so you’ve got to go in, do your best in camp and training and que sera sera when you walk to that ring.

“You can just have off nights. It’s a bit different to any other sport. You can be Andy Murray, playing in Wimbledon, and you get knocked out in the first round but it’s alright, you can come again because you’ve got the US Open still to come whereas if you’re a boxer, you have a slip up or you have a bad night or you didn’t have a great night’s sleep or you’ve had an argument with the missus or you’ve come down with an illness and that spills into your performance on the night of the fight then you’re ‘finished.’ Leigh Wood was ‘finished’ when he got beat by Jazza [Dickens] in the Golden Contract and all of a sudden he’s a man in demand with a big win. You’ve got to try to make sure that everything goes your way on fight night.”