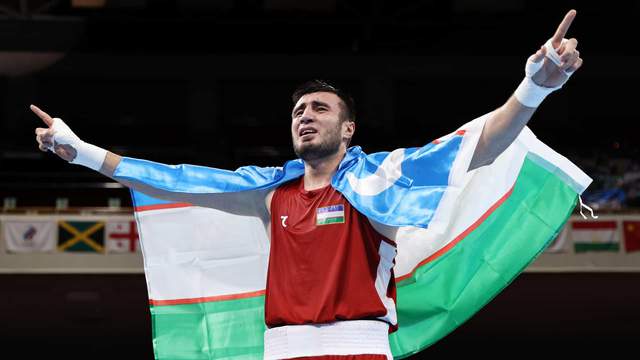 Best night of your career and why: Jalolov unsurprisingly feels his most significant performance came as an amateur at the Olympics.

“Of course, my best night was the night I won the Olympic Games in 2020,” Jalolov told The Ring through Alik Frolov. “There is nothing to compare to it. Maybe only to become an undisputed heavyweight champion.”

Worst night of your career and why: The big Uzbek is disappointed with his loss to eventual silver medalist Joe Joyce at the quarter-final stage of the 2016 Olympics.

“The night when I lost at the Olympic games 2016,” he said. “I was very young, but at that moment I felt that it was [a once in a] lifetime opportunity, so I was very disappointed.”

Next Fight: “The Big Uzbek” will kick off his 2022 campaign against the usually durable Kamil Sokolowski at the Duty Free Tennis Stadium, Dubai on Friday.

Sokolowski was born in Poland but fights out of the U.K. turned professional 2014. The 35-year-old sports a modest 11-25-2 (4 KOs) record. However, he has only been stopped on three occasions.

The Pole was stopped in his second fight by Dillian Whyte (TKO 3), Nathan Gorman (TKO 5) and Zhan Kossobutskiy (TKO 10). However, he has taken noted punchers like David Price, Martin Bakole and Vladyslav Sidorenko the distance. Most recently he took Otto Wallin eight rounds.

Why he’s a prospect: The former amateur standout has won a slew of amateur tournaments most notably claiming gold at the 2019 World Championships and 2020 Olympics.

“It means everything for me, for my family, for my country, I worked really hard to get those victories,” he said. “When some people say that it’s easy because I’m big or something, that sounds ridiculous to me. I’m fighting world class top fighters, whose weight is 220+-pounds so don’t come up with that nonsense. If I make it look easy sometimes, it’s because I’m training two times a day for the last 18 years.”

During his time in the unpaid ranks Jalolov shared a ring with a who’s who of his generation including Kamshybek Kunkabayev, Lenier Pero, Justis Huni, Frazer Clarke and Richard Torrez.

The extremely popular fighter, who can boast 1.1 million Instagram followers, feels that as well as being a 6-foot-7 southpaw, which is a difficult proposition for his opponents that he has three key strengths: “My movement, footwork and feeling of the distance is probably my better side.”

His manager, Vadim Kornilov, believes his amateur credentials will soon translate into the professional side of the sport.

“Jalolov has proved that he is one of the best amateur heavyweights in the world in the 2020 Olympics,” said Kornilov. “I believe that over the course of time, he will also prove to be one of the best pro heavyweights. He has already proven to be a top prospect numerous times.

Former WBC junior middleweight titlist Sergio Mora, who now works for DAZN as a commentator, is familiar with Jalolov and sees a considerable upside. 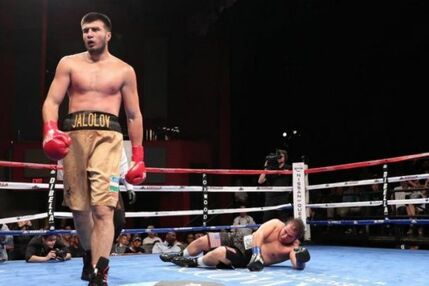 “He’s gonna be hard to beat and look good against. I imagine it’ll be hard to get him fights too. Think Michael Hunter with power. He has a high ceiling to be successful and remain unbeaten because he’s a highly skilled boxer-puncher, but to become an attraction in a loaded heavyweight division he would have to make a statement against a Joe Joyce type fighter. Both are being moved fast and it’s a fight I’d love to see.”

Why he’s a suspect: After such an illustrious amateur career there’s not much Jalolov hasn’t seen. However, now as a professional he feels he needs to improve across the board to be ready for the best in the division.

“I will be learning and practicing everything to get better,” he said. “Of course, it’s up to my team of trainers to work in areas they want me to do better. I am still growing and gaining strength, muscle, as in the pros we need to rely more on strength and conditioning, so it’s one of many things we are working on.”

“I’d like to see how he fights on inside, maybe more head movement,” said Mora. “Big guys like that are susceptible to winging punches and wide hooks.”

Storylines: Jalolov was the middle child of three, born and raised in the small town of Sariosiyo, nearly four hours’ drive south of the Uzbekistan capital, Tashkent.

“I grew up in a regular family,” he said. “Being a tall, weak kid, I played soccer. Actually, I was pretty good at it. I played for the city team and in the youth league.”

In his early years, Jalolov was never interested in combat sports but his father who was a wrestler and a tough guy, who worked as a policeman, wanted to toughen his only son up.

“He wanted me to become a fighter, but in our city, there were only two sport sections: freestyle wrestling and soccer. And I chose soccer, as I (thought) I was good at it,” he said. “At the age of 12, my dad told me that he’d send me to sports school play soccer, but he tricked me and sent me to boxing class, and promised me that if there were any openings in soccer class, he’d take me there.

“He knew from the beginning what he was going to do, so I didn’t have much choice but to follow his command. At first it was really tough but little by little I started getting better and better, started enjoying training.

“My father was really happy with all my success, he was always in touch with my coach and he was targeting big goals for me. Since he passed away his dreams became my priority and I became Asian, World, and Olympic Champion. That’s why it is so important for me.”

He hopes to emulate the success of his boxing heroes, the Klitschko brothers.

“I respect Vitali’s no-compromise style and Wladimir’s ring I.Q and perfection,” he said. “I’m a maximalist – my goal is to become world champion.

“I think I have all the tools to make it by the end of 2023. God willing, my ultimate goal is to be undisputed (champion).”

Aside from boxing he enjoys playing soccer, spending time with his friends and playing on the PlayStation.