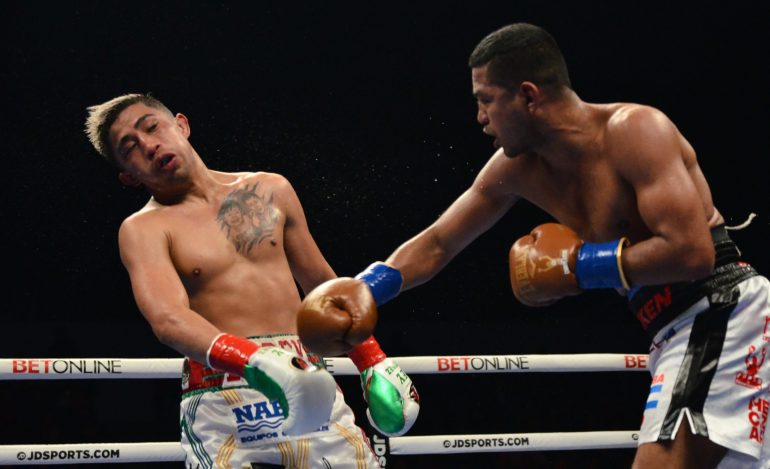 Many observers believe Gonzalez won at least 10 rounds vs. Martinez, some thought the future hall of fame pitched a shutout. Photo by German Villasenor
06
Mar
by Tom Gray

It doesn’t seem too long ago that we were collectively writing Roman Gonzalez’s pugilistic obituary.

On Sept 17, 2017, as he lay flat on his back at the Stub Hub in Carson, California, fans around the world mourned the demise of a truly magnificent prizefighter. He had conquered four divisions, achieved pound for pound supremacy, and shone a massive spotlight on the lower weight classes. However, a blockbuster right hook from Thai power-puncher Srisaket Sor Rungvisai – who had controversially outpointed Gonzalez  six months earlier – had extinguished Nicaragua’s shining light in the fourth round.

The King is dead, long live The King! Or so many of us thought.

Prior to the Sor Rungvisai setbacks, Gonzalez had been hampered by a knee injury, and when successful surgery fixed that problem, he was able to increase his strength and conditioning work and run more. There was also a marked improvement in gym performance and a fresh desire to reclaim glory.

Following two routine stoppage wins over Moises Fuentes and Diomel Diocos, “Chocolatito” was in position to challenge unbeaten British star Kal Yafai for the WBA junior bantamweight title. Yafai had looked sharp coming through the ranks, and his title winning performance against super-tough Panamanian Luis Concepcion was punch perfect. The Birmingham man was less convincing in title defenses, but he was younger, stronger and in the prime of his career.

None of that mattered.

Yafai was game but ultimately out of his depth and a rejuvenated Chocolatito won yet another world title via ninth-round stoppage on Feb. 29, 2020 in Frisco, Texas. 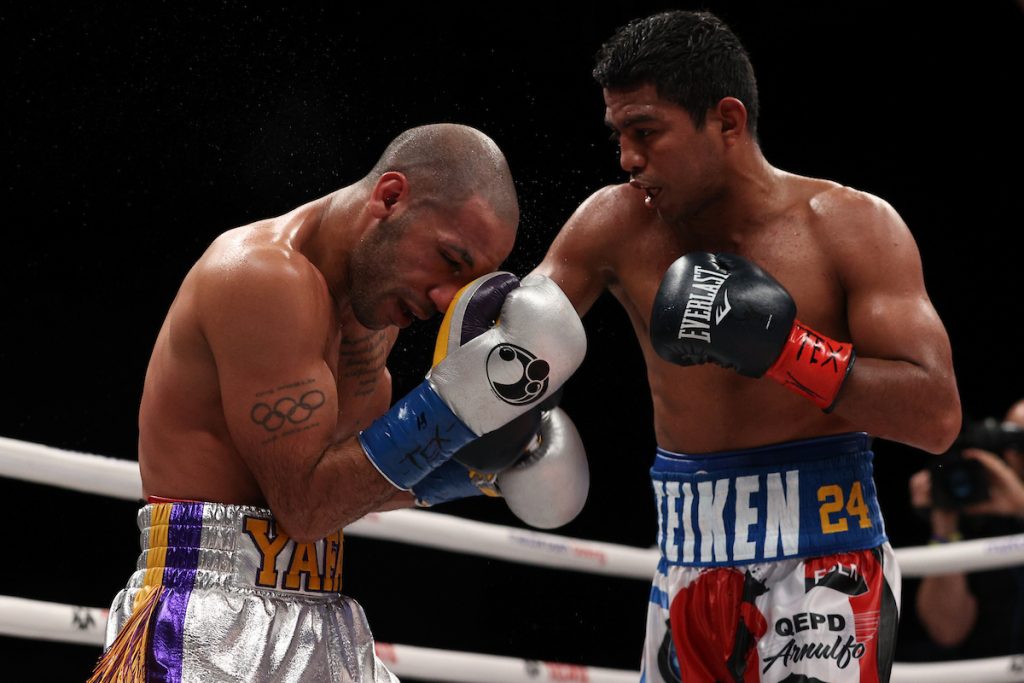 There was slightly less sparkle in Gonzalez’s follow up defense, against Israel Gonzalez, but the future Hall of Famer didn’t get out of second gear and still won convincingly. His next test, however, would provide all the motivation he could ever need.

Juan Francisco Estrada had annexed The Ring and WBC 115-pound titles from Gonzalez conqueror Sor Rungvisai in April 2019. The Mexican technician was now in the pound for pound Top 10, his stock had never been higher, and he was eager to avenge his loss to Gonzalez.

The pair had met at the Sports Arena in Los Angeles in November 2012. It was a battle for the ages – perhaps the fight of the decade – but Chocolatito’s work rate and class were decisive in securing a 12-round unanimous decision triumph. Now scheduled for a long overdue return fight, it was Estrada who had the superior form and career momentum.

On March 13, 2021 – the same day we lost the great Marvelous Marvin Hagler – Gonzalez boxed brilliantly against his old rival. You’ll struggle to find a boxing insider who felt that Estrada deserved the split decision win he was accorded, but a WBA investigation into a ludicrous scorecard that awarded the Mexican nine of 12 rounds accomplished nothing. It was 1-1 and only a rubber match could settle the argument.

Estrada-Gonzalez 3 was set for March 5, 2022 and the boxing world eagerly anticipated yet another elite-level clash between boxing masters.

It was not to be. 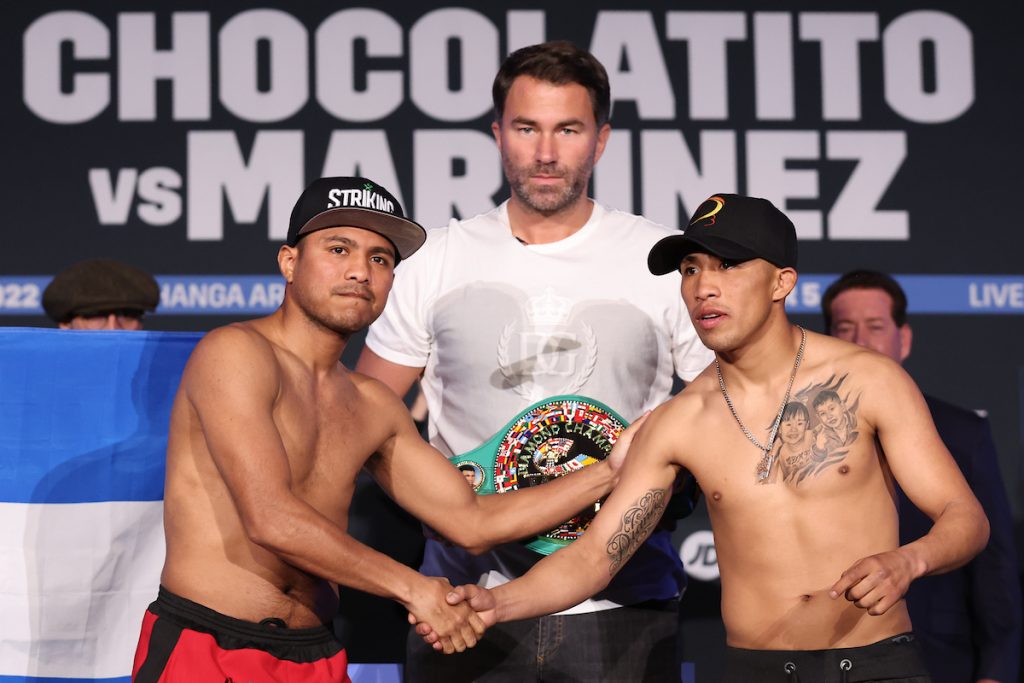 Roman Gonzalez and Julio Cesar Martinez pose after weighing in for their March 5, 2022 fight at the Pechanga Arena in San Diego. Photo by Ed Mulholland/Matchroom

The 31-year-old Estrada tested positive for Covid, but fans barely had a chance to convalesce when a new challenge emerged. Julio Cesar Martinez, the reigning WBC flyweight titleholder, volunteered to jump up in weight and fill the void left by his compatriot. Martinez, who hails from Mexico City, hadn’t lost a fight since his pro debut in October 2015 and enjoyed the reputation of a fierce knockout artist.

Gonzalez (51-3, 41 KOs) was installed as a slight favorite, but few could have expected the performance we saw from him at the Pechanga Arena in San Diego, California, on Saturday. Chocolatito settled quickly and his amazing punch variety and liquid grace were on display from the opening bell. Martinez appeared flabbergasted by what was in front of him and took every punch in the book, and some of the combinations he absorbed aren’t even in the book.

I’d picked Gonzalez largely because he’s a much better boxer. However, I’d also noted that Martinez is a momentum-based power puncher that likes plenty of rush room. He’ll linger on the outside, attack suddenly, and opponents back off in a distressed state as bombs go off all around them. My hunch was that Gonzalez would close the gap, find all the empty spots, and his high guard and knowledge of angles would have the Mexican trying to converse in a language he’s never learned.

But I was still absolutely blown away as I watched Chocolatito do his thing last night. The man is a fistic marvel and one of the finest fighters we’ve seen in the past several decades. If you want to know what a complete fighter looks like, this is the man to watch.