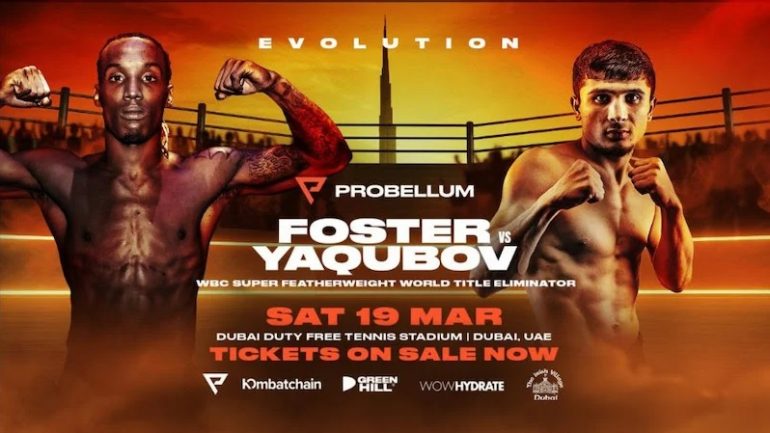 O’Shaquie Foster is returning from a long layoff with a cryptic message of destruction for his upcoming dance partner.

The Ring’s No. 9-ranked junior lightweight, who hasn’t fought since November 2019 after separating from longtime promoter Lou DiBella and linking with Probellum late last year, is set to face Tajikistan’s Muhammadkhuja Yaqubov in a WBC 130-pound title eliminator, on March 19, at Duty Free Tennis Stadium in Dubai.

A victory would guarantee Foster a future shot at the WBC title, currently held by Oscar Valdez, who is facing WBO titlist Shakur Stevenson in a title unification, on April 30, in Las Vegas.

However, according to Foster, Robson Conceicao, who won a separate title eliminator in January and lost to Valdez last year, would likely get first dibs.

“Robson Conceicao, I guess he’s waiting on the winner, so it looks like he’ll be next. Honestly I just want to remain active, stay busy and keep the momentum going.”

However Yaqubov (18-0, 10 knockouts), 26, enters the ring with some recent hype behind him. The Egis Klimas-managed southpaw is coming off a fourth-round TKO of journeyman Cristian Palma last September. His three prior bouts were won by unanimous decision.

“His name has been swirling around for the last year,” Foster said. “We’ve been paying close attention to him. When they announced the WBC eliminator tournament, that’s when I figured we would be fighting. My team brought [the offer] to me and we made the best decision [to take the fight].”

Over the last several years, the boxing world has seen an influx of fighters flowing in from Tajikistan and especially Uzbekistan. We asked Foster (18-2, 11 KOs), who hails from Houston, Texas, based on his analysis, what stands out among their boxers.

“They prepare a little different than how we prepare,” he added. “I work with all the styles and there ain’t a style I haven’t seen. I’m looking forward to seeing what he brings to the table. I have done a little studying on him. I don’t want to put the game plan out there but [I’m] definitely looking forward to it.”

The 28-year-old Foster also spoke briefly about his split with DiBella and the mental challenges accompanied by his subsequent time spent on the shelf.

“Being inactive definitely was the tough part because I was inactive at the beginning of my career. We were finally on a run and having several fights a year and COVID hit so it was pretty tough but I had to understand that it wasn’t just me. Everybody was going through it and it was just an adjustment period.

“It was a process [with Lou] but we’re all past that now. I wish them the best. I’m not a part of DiBella Entertainment anymore. I’m strictly with Probellum but I wish [DiBella Entertainment] the best. There’s no hard feelings or anything; I have nothing bad to say about him and I wish everybody the best.”